AIDS still substantial challenge to world although campaign forges ahead 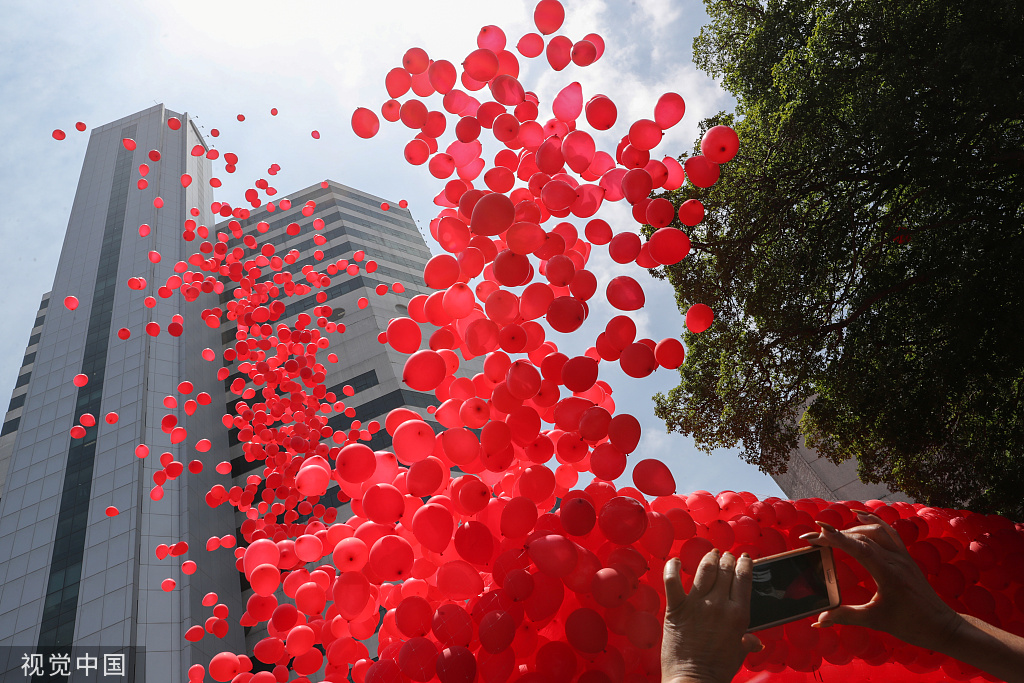 Overall HIV incidence rates are declining, but the total number of infections is still unacceptably high, with 1.7 million new infections in 2018, the World Health Organization (WHO) data showed.

"This number is not dropping fast enough to meet the UNAIDS target of fewer than 500,000 people infected per year by 2020," said Peter Sands, executive director of the Global Fund to Fight AIDS, Tuberculosis and Malaria (Global Fund).

"We are at a crucial stage in the fight against HIV," Sands told Xinhua days before the World AIDS Day, designated on Dec. 1 every year by WHO since 1988.

Significant progress has been made as HIV new infections decline and more people living with HIV gain access to treatment, according to a new report released recently by the Joint United Nations Programme on HIV/AIDS (UNAIDS).

New HIV infections declined by 28 percent from 2010 to 2018 in eastern and southern Africa, said the UNAIDS report.

Meanwhile, in a promising sign, the incidence rate of HIV among adolescent girls and young women aged 15-24 in the region declined from 0.8 percent in 2010 to 0.5 percent in 2018.

Particularly, the report highlighted that significant progress has been made in expanding access to treatment. As of mid-2019, about 24.5 million of the 37.9 million people living with HIV were accessing treatment.

As treatment roll-out continues, fewer people are dying of AIDS-related illnesses. In 2018, some 770,000 people died from HIV-related causes globally, WHO data showed.

"As a community leader, I am able to relate to people and understand their background better than someone from the outside," said Josephine Wanjiru, an HIV community activist in Kenya.

"I have been living openly with HIV for 25 years, so people come to me with their issues, such as HIV-related stigma, disclosure and adherence. I have never stepped back from this role as I am part of this community," said Wanjiru.

The UNAIDS report shows that when people and communities have power and agency, change happens.

"The world is on the cusp of making great gains in the battle against HIV and AIDS, but we must not rest on the laurels of progress made," said Executive Director Henrietta Fore of the United Nations Children's Fund (UNICEF).

WHO data show that there were still approximately 37.9 million people living with HIV worldwide as of mid-2019. Among them, about 25.7 million people were living in Africa.

In countries that have achieved significant progress in reducing HIV prevalence rate and AIDS-related deaths, the gains have been challenged by complacency.

In Ethiopia, for example, new HIV infections have been reduced by 70 percent and AIDS-related deaths dropped by 90 percent over the past two decades, Daniel Betre, the country's HIV/AIDS Prevention and Control Office public relations and communication director, told Xinhua.

However, the progress made then seem to be challenged by complacency, said Daniel.

"Still today, we are losing over 13,000 citizens every year due to HIV/AIDS-related deaths and also about 13,000 new infections every year. Currently, over 600,000 people are infected with HIV/AIDS in Ethiopia, out of which only 470,000 are on anti-retroviral therapy (ART), and this shows that there is a lot to be done," Daniel noted.

Globally, only 62 percent of adults and 52 percent of children living with HIV were receiving the lifelong ART, according to WHO.

Making things worse, some governments even refuse to recognize, support or engage community organizations in their national responses to HIV and are subsequently missing out on their enormous potential to reach the people most affected by HIV, the UNAIDS report noted.

UNAIDS urges all countries to fully support and enable their community-led organizations, ensure they have a seat at all decision-making tables concerning the health and well-being of their community members and remove any barriers to their active engagement in the response to HIV.

"Only by fully funding and fully supporting the work of community organizations will the end of AIDS become a reality," said the UNAIDS report.

"China is right now the chair of our UNAIDS Programme Coordinating Board. China has been doing a phenomenal job," said Dr. Shannon Hader, deputy executive director of UNAIDS and assistant secretary-general of the UN.

"Particularly, in addition to historically responding to overcoming infections through blood transfusions, for example, the Chinese government has recently looked deeply into its own data to really found out what is new and who needs to be reached in different ways, so that programs can be targeted into the future and that is a big bold move that I wish every country should do," said Dr. Shannon.

"We actually have an extremely strong relationship with China and really appreciate that," said Dr. Shannon.

According to Sands of the Global Fund, in addition to the indirect contribution through the Global Fund, China has also forged a very good partnership with the African Union (AU), a 55-member pan-African bloc, whereby it provides supports, including training for experts who play indispensable role in the fight against the HIV/AIDS.

"AU has a very good collaboration with China. And recently two of our members went to China and received training on HIV control," said Benjamin Djoudalbaye, AU acting head of HIV/AIDS, TB and Malaria.

In September 2018, during the Beijing Summit of the Forum on China-Africa Cooperation, public health was identified as a top priority for China-Africa health cooperation.

"China can play a leading role, as a strong model for providing quality health care domestically, and as an international leader on many global challenges," said Sands.