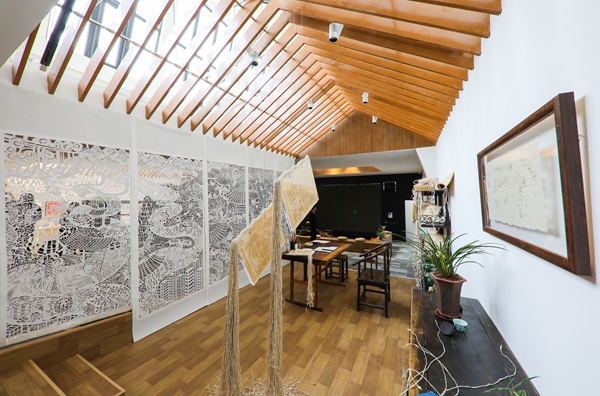 Peng Tian is busy explaining how she made the dough models on display to an audience at the Ullens Center for Contemporary Art in Beijing in mid-October.

"Every work has an element of traditional culture or an interesting story behind it," Peng says.

Peng was among four young artists showing their latest works of intangible culture at the center.

Their work was set out in the shape of a quadrangle where audience could witness the collision between the traditional and modern arts.

Visitors can take in translucent palace lanterns, paper-cut works, or other visual arts such as traditional fire dragon dances from Chengdu, Sichuan province, in the space.

Workshops offering interactive experiences in intangible culture heritage were also set up to allow visitors to interact with art practitioners.

"We want young people to gain inspiration from Chinese history and culture that they may have overlooked in the past," says Chen Muru, head of marketing with Airbnb China.

Around 80 percent of young travelers show an interest in cultural experiences, Chen says.

"The idea is to help young travelers immerse themselves in the charms of Chinese culture."

To date, Airbnb has organized around 40 intangible cultural heritage experiences across China, including Beijing and Shanghai, but also in places as far as the Qiandongnan Miao and Dong autonomous prefecture in Guizhou province, and in Sichuan's provincial capital, Chengdu.

These experiences have also brought about positive changes to the artists taking part.

Many young people have visited Peng's workshop to experience her dough modeling since she started working with Airbnb.

"They already know the basic facts from the Airbnb events and want to gain a better understanding of the art at first hand," Peng says.

Peng introduces the historical background of each type of dough models, and visitors are taught how to make one on their own.

After they finish their own work, they are issued with a certificate to prove they have acquired the skills to present a work of intangible culture heritage.

"Many of the travelers actively participate and ask questions, and their sense of achievement is quite apparent," Peng says.

"You can see them taking photos and sharing their experiences online."