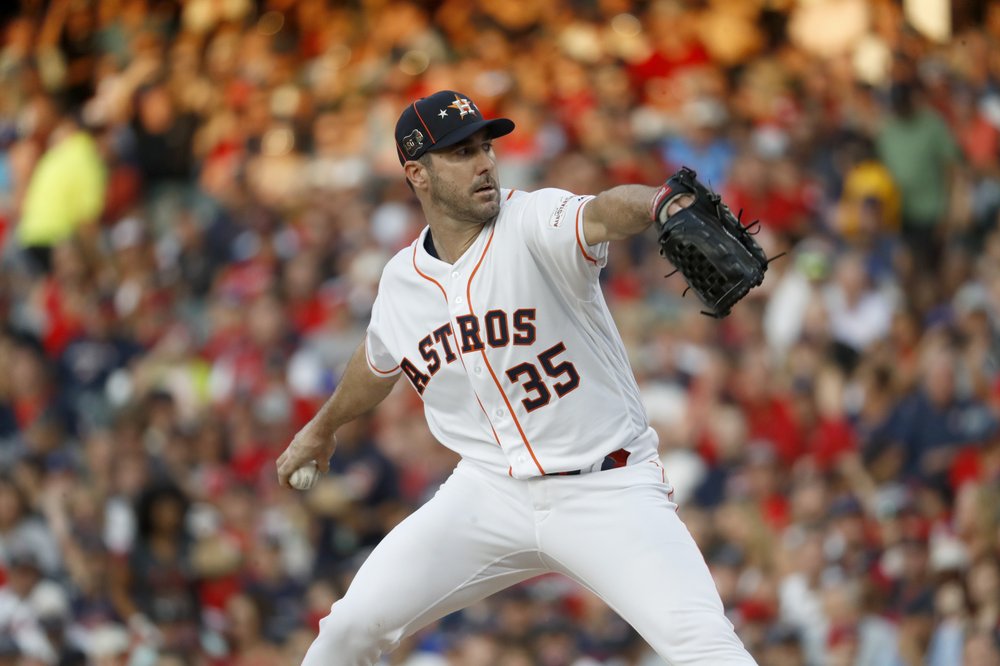 For one night, the pitchers took back the power.

Hours after an awesome Home Run Derby got everyone buzzing even louder about monster shots and juiced balls, only a couple flew out of Progressive Field in the All-Star Game.

Instead, Justin Verlander blazed 97 mph heat from the start, Shane Bieber and Aroldis Chapman each struck out the side and the American League slowed a loaded NL lineup 4-3 Tuesday for its seventh straight win.

Sure did — at least until play resumes Thursday.

Facing Christian Yelich, Cody Bellinger and a bunch of boppers, the AL staff combined to strike out 16.

“Baseball is a funny game,” said Bieber, a most unlikely MVP after being added late to the roster.

With fans hoping to see a replay of Monday’s jaw-dropping aerial show when 312 homers cleared the walls, this became the Arm-Star Game up until the late innings.

Derby champ Pete Alonso of the Mets grounded a two-out, two-run single past Gleyber Torres in the eighth to close the NL’s gap. After a double steal put runners at second and third against Cleveland reliever Brad Hand, White Sox catcher James McCann made a tumbling catch on Mike Moustakas’ twisting foul pop to end the inning.

Chapman closed to give the AL its 19th win in 22 games, with a tie stuck in there. He got a little encouragement with two outs — Yankees teammate CC Sabathia, honored this week for his contributions on and off the field, strolled to the mound to talk to the flamethrower.

Chapman then struck out Yasmani Grandal for a save , giving the AL an overall 45-43-2 lead in the Midsummer Classic.

No need, either, for the experimental rule that was set to go effect: If the game went into extras, each team would’ve started the 10th with an automatic runner on second base.

Major League Baseball is on a record-shattering pace for homers this season, but no one came close to clearing the walls until Charlie Blackmon connected in the NL sixth to make it 2-1. Texas’ Joey Gallo countered with a solo drive in a two-run seventh.

Still, it was a far cry from last year’s All-Star Game that featured a record 10 home runs.

“I kind of expected it, to be honest,” former NL MVP Kris Bryant said. “You only see them once, so they have the advantage.”

“There are a lot of hard throwers and great pitchers over there. Unless you’ve seen them before, it’s a difficult matchup,” he said.

Cleveland favorite Michael Brantley had an early RBI double off losing pitcher Clayton Kershaw. Jorge Polanco drove in a run with an infield single for a 2-0 edge in the fifth and another scored on a double-play grounder.

“I wanted to swing the bat early. I had some nervous jitters I wanted to get out,” Brantley said.

Winning pitcher Masahiro Tanaka, Lucas Giolito and Shane Greene did their parts to protect the lead with scoreless innings.

Bieber dazzled in front of a chanting home crowd, striking out Willson Contreras, Ketel Marte and Ronald Acuña Jr. in the fifth with a 1-0 lead. Bieber later donated his cap to the Hall of Fame.

“It was electric out there, the fans got in it and it was fun,” AL manager Alex Cora of the Red Sox said. “And I’m glad that he got the MVP. He plays at this level. He’s really good.”

The biggest misplay of the night might have been on the scoreboard. NL All-Stars David Dahl of Colorado and Willson Contreras of the Cubs had their names misspelled — “Davis Dahl” and “Wilson Contreras” — on the outfield videoboard. Jeff McNeil was spelled correctly, but the photo accompanying it was of Mets teammate Jacob deGrom.

“That was tough, to see deGrom’s picture up there,” McNeil said. “I didn’t really like that. I wanted to see my picture up there. I know my family did, too. What are you going to do, I guess, but I don’t think that should happen.”

Fittingly, the first batter of the game was the guy who leads the majors in home runs — Yelich, the NL MVP with 31 homers at the break, hit leadoff for the first time this year.

Yelich lined out and Verlander quickly fanned Javier Báez and Freddie Freeman to finish his work.

Those lively balls that Verlander is complaining about? Didn’t bother him a bit.

Pittsburgh dynamo Josh Bell was part of the youngest starting lineup in All-Star history, with the NL crew averaging under 26 years old.

Overall, there were 36 first-timers, a number boosted by the absence of Bryce Harper, Manny Machado, José Altuve and several past perennials. And consider this: Of the 16 AL pitchers on the 2017 All-Star roster, zero made the roster this year.

All players wore a uniform patch with No. 45 to honor late Angels pitcher Tyler Skaggs. Los Angeles teammates Mike Trout and Tommy La Stella switched their jerseys to Skaggs’ number, and there was a pregame moment of silence.

“I felt him out there with me,” Trout said. “To be able to represent him and what he meant to us on a stage like this is special.”