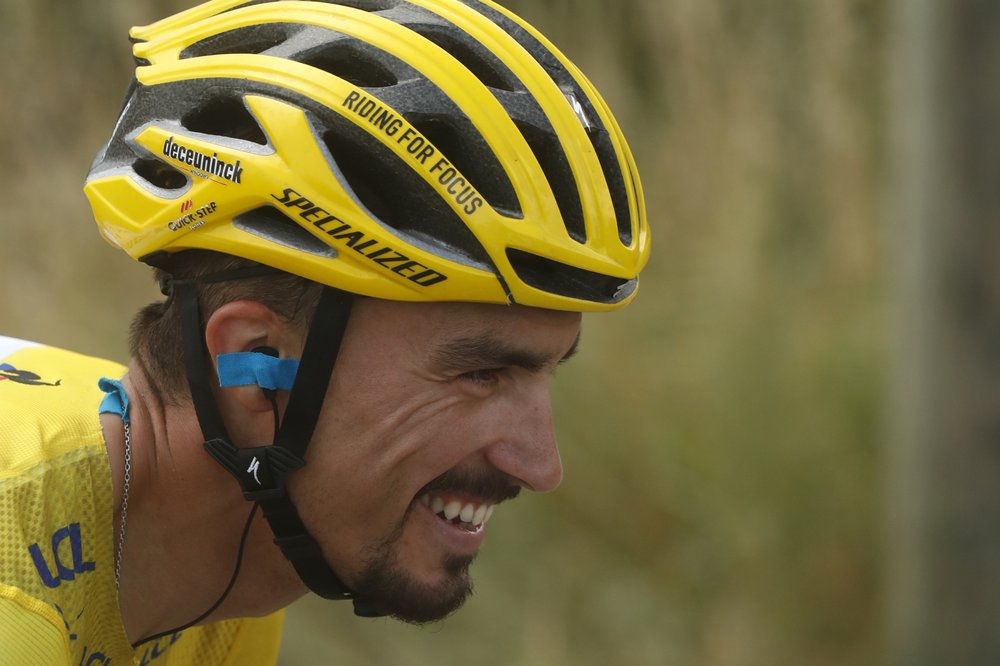 Picture the final showdown in “High Noon.” But at more than a mile above sea level.

With an Alpine trilogy of stages including six climbs in rarefied air, forecasts of stormy weather and only 39 seconds separating five riders determined to topple yellow jersey holder Julian Alaphilippe, the next three days at cycling’s marquee race have all the ingredients for an explosive and suspenseful conclusion.

In the role of former marshal Will Kane, Alaphilippe. With his good looks and heart-on-the-sleeve style of racing, he has become France’s national hero over the past two weeks, raising hopes that the host country will finally get its Tour champion after a 34-year wait.

After claiming the race lead by storm with a couple of well-time attacks followed up with a shock victory in the race’s individual time trial, Alaphilippe surprisingly hung onto the coveted tunic in the Pyrenees last week.

But the odds are firmly stacked against the Quick Step-Deceuninck rider in the Alps, a terrain with very long climbs that do not suit his punchy style. But like Marshal Kane, “Ala-Panache” — the nickname he earned this summer — is ready for a final battle.

“I can take punches in the mountains,” Alaphilippe said on Wednesday after Matteo Trentin won Stage 17, making the most of a long breakaway that Tour favorites were happy to let go. “I’m looking forward to the Alps.”

Alaphilippe was not even born when Bernard Hinault won the last of his five Tour de France titles back in 1985. Thursday will mark the 13th day he will be wearing the yellow jersey, making him the first Frenchman to reach that tally at a single Tour since Hinault’s final win.

“One extra day in yellow, this is wonderful,” Alaphilippe said. “I will fight until the end. I’m gonna give it all.”

If Alaphilippe fails to defend his 1 minute, 35-second lead, another Frenchman is ready to take over in the person of Thibaut Pinot. The FDJ-Groupama leader has demonstrated in the Pyrenees that he was the best climber, taking time on all his rivals to make up for the time he lost in crosswinds earlier in the race.

Pinot is among the five riders who can believe they have a chance to win the Tour on Sunday on the Champs-Elysees, alongside defending champion Geraint Thomas, Steven Kruijswijk, Egan Bernal and Emanuel Buchmann.

With Thomas and Bernal, the Ineos team has a double card to play. Bernal is a pure climber from Colombia used to riding above 2,000 meters (6,560 feet), while Thomas is the most experimented of all contenders. He knows how to win a three-week race, and despite the minor crash he suffered on Tuesday, his morale is high.

“Looking forward to it now. Big three days and a big test,” said Thomas, who sits in second place.

He added that Alaphilippe might be in for a tough time Thursday, with teams possibly riding hard to make him crack. Stage 18 to Valloire features two punishing and famed climbs, the Col d’Izoard and the Col du Galibier.

“He wasn’t great a couple of days ago and he’s been racing really well all race, so you’d think he’d be starting to get tired now,” Thomas said. “So, yeah, I guess teams will be thinking to try and make it hard all day.”

On paper, Stages 19 and 20 look even more difficult, with the Iseran mountain and two consecutive summit finishes. At 2,770 meters (9,090 feet), the Iseran is a Tour de France giant and one of the highest road passes in Europe where thin air makes things harder.

“Every day is going to be important,” Thomas said.

For Trentin and other already exhausted riders with no ambition in the general classification, the last stage that really mattered is now behind them. And the Italian rider made the most of it to post a third career stage win at the Tour.

With the peloton happy to the let an early breakaway develop at the start of the hilly, 200-kilometer trek to Gap, Trentin rode at the front for most of the stage and moved clear of the leading group about 14 kilometers from the finish at the bottom of the Col de la Sentinelle. He was first at the summit and went all out in the downhill leading to Gap. Kasper Asgreen was second, 37 seconds behind, with Olympic champion Greg Van Avermaet completing the podium.

Already thinking about the Alps, Alaphilippe and his rivals crossed more than 20 minutes behind.

“Everybody is exhausted, it was the final day for saving strength,” Alaphilippe said. “The trilogy in the Alps will decide the winner.”