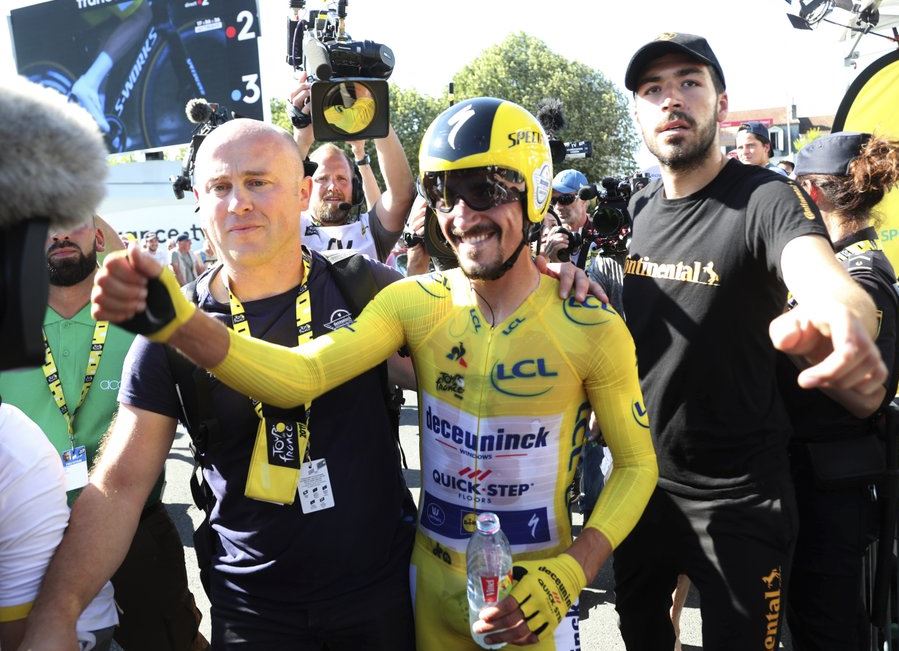 Inspired by his yellow jersey, Julian Alaphilippe held off defending champion Geraint Thomas to win the only individual time trial stage of this Tour de France on Friday, a shock victory to raise French hopes that he could go all the way in yellow to Paris next week.

Cheered on by boisterous crowds hammering on roadside barriers, Alaphilippe sprang a surprise in his margin of victory on the tricky, hilly, turn-filled loop south of Pau, with spectacular views of the Pyrenees.

Having previously predicted that he’d lose time to Thomas, an expert in the race against the clock, Alaphilippe stunned even himself by emphatically relegating the Welshman into second place, 14 seconds slower.

“It’s incredible,” Alaphilippe said, adding that his performance reduced members of his team to tears. “I didn’t think I’d win.”

All eyes turn to the Pyrenees to see whether Alaphilippe can continue his dream race on Saturday ascending the legendary Tourmalet, the first of seven climbs to above 2,000 meters (6,500 feet) in the highest Tour in the race’s 116-year history.

Alaphilippe also won Stage 3 and has held the race lead for a total of nine days, wowing French fans crossing fingers and toes for their first homegrown champion since Bernard Hinault in 1985.

Alaphilippe has said he expects to suffer in the high mountains, where the likes of Thomas and specialist climbers are expected to shine. But given how Alaphilippe has continued to confound expectations with his punchy riding and gritty determination to stay in yellow, fewer will be predicting he can’t ride up the Champs-Elysees in the lead on July 28.

Belgian rider Thomas De Gendt, third on Stage 13, was among those saying Alaphilippe could go all the way, after his demonstration of strength in Pau.

“He can surprise everybody,” De Gendt said.