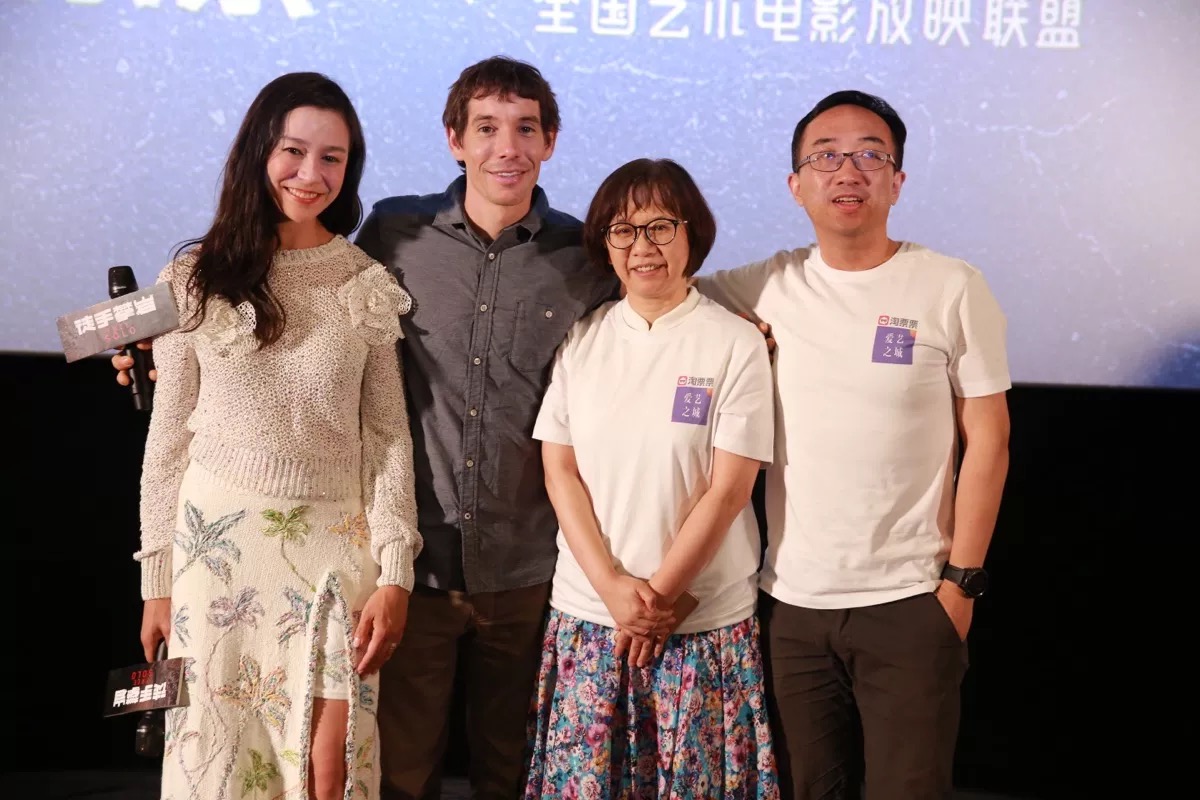 Alibaba Pictures announced that it will build a unique platform with the Nationwide Alliance of Arthouse Cinemas to promote arthouse films in China at the premiere of the Academy Award-winning documentary film "Free Solo" held in Beijing on Aug. 30.

Li Jie, senior vice president of Alibaba Pictures and CEO of Alibaba's ticketing app Taopiaopiao, said Taopiaopiao has officially launched an arthouse film fans interactive online community called Arthouse Land. "It will provide exclusive customized information, rights and interests for arthouse moviegoers, and we hope to build a special place for fans to assemble, which can serve them better and provide unique content."

The announcement was made at the China premiere of "Free Solo", a 2018 documentary film directed by award-winning documentary filmmaker Elizabeth Chai Vasarhelyi and world-renowned photographer and mountaineer Jimmy Chin, an American couple of Chinese descent.

"Free Solo," set for Sept. 6 release in China, intimately records rock climber Alex Honnold's stunning and inspiring unaccompanied and unsupported ascent of the 3,000-foot El Capitan in America's Yosemite National Park in June 2017. The film is a production of National Geographic Documentary Film, imported by China Film Group with its promotion undertaken by Alibaba and Taopiaopiao.

Alex Honnold and Elizabeth Chai Vasarhelyi attended the premiere. Honnold said he initially thought the film would only be liked by climbers and climbing sport lovers, but now he realized the film has a broader appeal and can inspire everyone to be brave to be themselves and to live the life they want.

Alibaba Pictures had boasted it as another Oscar-winning film in its jurisdiction, as it has successfully uncovered an Oscar gold mine in recent years by co-financing or marketing several Academy Award-winning or nominated movies, such as "Green Book", "Bohemian Rhapsody" and "Capernaum".

All of those films managed by Alibaba made exceptional box office triumphs compared with how they performed in other world markets, and compared with other arthouse films. Many in Hollywood see Alibaba "as a partner to help navigate a marketplace with different moviegoer expectations", a Wall Street Journal reporter said in a recent report.

Documentary films are considered by Alibaba as a genre falling into the arthouse category, which means a small-budget film with high-quality and artistic value, but significantly less popularity compared with blockbuster-type movies. There are a few great arthouse successes in China, such as "Song of the Phoenix", but most arthouse films and their filmmakers are still struggling. 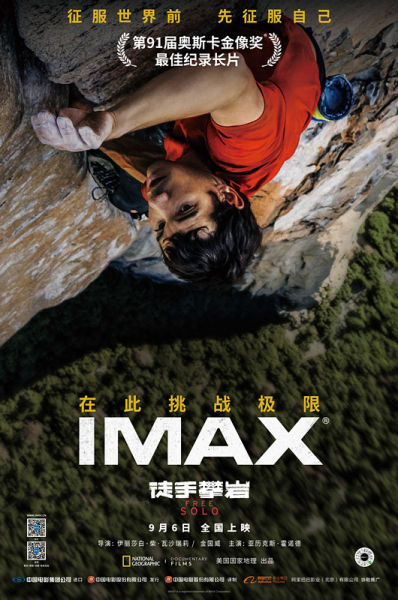 That was why "Free Solo" was selected by Alibaba as the first film to be inducted into its new arthouse film platform with an official account. The online community will not only be provided with movie news, community interaction, merchandise, but will also give users rights and interests to participate in various official events of arthouse films.

Alibaba said it aims to engage more arthouse movie lovers by using big data from Alibaba's platforms to reach a precise group of users, and by working with the support from the Nationwide Alliance of Arthouse Cinemas, a group formed in 2016 and operated by the China Film Archive and a consortium of theater chains supporting arthouse films.

Alibaba's statistics show that the number of annual purchases by arthouse film fans and film reviews written by them are much higher than that of ordinary moviegoers. The increasing activity of arthouse moviegoers will create incremental space for the Chinese film market.

Sun Xianghui, director of the China Film Archive and head of the Nationwide Alliance of Arthouse Cinemas, said with the maturity of the Chinese film market and the diversification of the Chinese audience's film-viewing demands, arthouse films and commercial films with artistic values now attract more and more audiences. "We hope to bring more top-quality content to more people through Taopiaopiao's platform, which provides arthouse film lovers a more enhanced way to access content, interaction, sharing and consumption."

According to him, Lisa Azuelos' "Dalida", Laszlo Nemes's "Sunset", Nuri Bilge Ceylan's "Ahlat Agaci" and Peter Jackson's "They Shall Not Grow Old" will soon be screened in China via the Nationwide Alliance of Arthouse Cinemas. Users can look for first-hand information of these films published on Taopiaopiao's platform.