CULTURE All-girls school becomes 1st in US with varsity esports

All-girls school becomes 1st in US with varsity esports 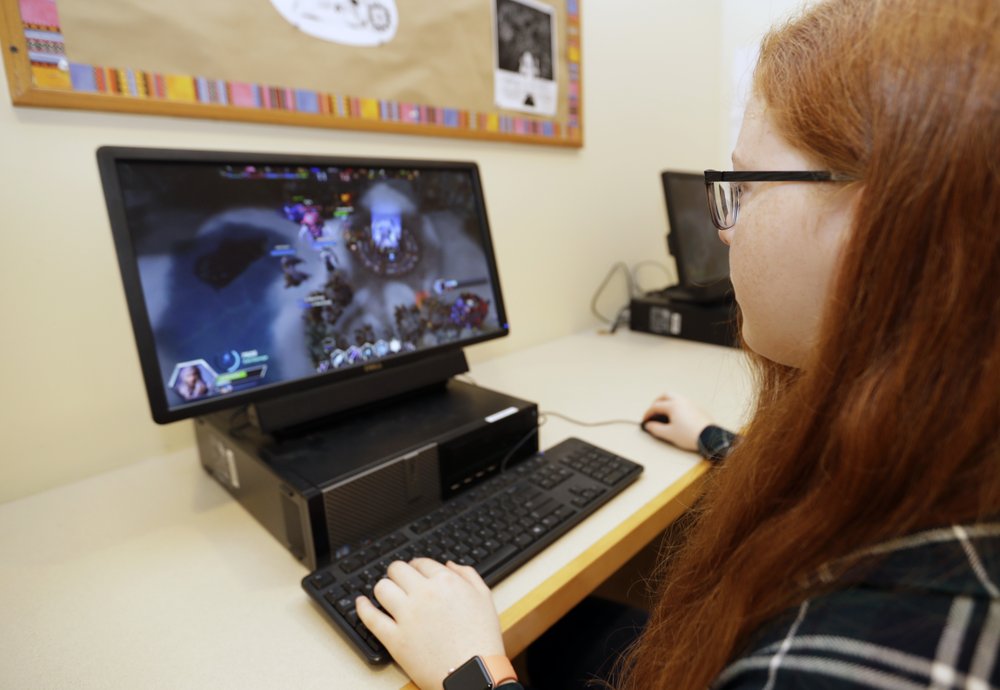 As a liaison at the US Department of Education, J Collins watched as colleges by the dozen rolled out varsity esports programs, complete with scholarships, coaches and even some arenas. Collins had a gnawing concern: Gaming was beginning to have an impact on education, and at least anecdotally, the benefits were going largely toward male students.

Now, Collins is on the ground attempting to solve a puzzle that’s perplexed an industry approaching $1 billion revenues — where are all the female gamers?

Collins helped a private school near Cleveland become the first US all-girls school to launch a varsity esports program during last school year. With Collins as coach, the 10-person team at Hathaway Brown competed against local schools and libraries, with players ranging from novices to avid gamers. The players reported many of the benefits associated with traditional sports — bonding, teamwork and improved confidence among them — and some say they might pursue college scholarships. Collins hopes the program can set an example for how high schools can attract more girl and gender minority gamers so they can take advantage of expanding opportunities at the university level.

Collins has a background in game-based education and was the first to broach the topic of esports at the Department of Education late in President Barack Obama’s final term. Football became a go-to analogy — the sport has impacted high school and college education in major ways, with resources poured into aiding its almost exclusively male participants.

Esports has already begun to spread in similar fashion. Over 100 colleges have varsity esports programs, and more are joining each year, with many smaller schools using teams as recruiting tools. That expansion could open doors for students of all genders, especially since video games don’t have the same physical barriers as most traditional sports.

“There was an imperative for us to be involved with it from an early outset, so that we could ensure there was equity across implementations,” Collins said.

Collins found that collegiate esports teams were struggling to find non-male players. The same complaint kept coming up: Girls and women aren’t in esports because they don’t play video games.

That didn’t jive with the data, which shows that 45% of gamers in the US are female .

“It got us thinking, maybe the problem isn’t that there aren’t girl gamers and gender minority gamers,” Collins said. “Maybe the problem is that they’re in different places than the esports teams are looking.”

Collins suspects the trajectory for girls in gaming is similar to girls and gender minorities in STEM. Research shows many girls shy away from science, technology, engineering and math tracks around middle school due to “lack of role models, toxic culture and generally feeling like they don’t fit in in that world,” Collins said.

League of Legends, the world’s most popular esport, fits a similar description. There are no women in its highest professional circuit, and its largely male player base has been criticized for its toxic reputation. After leaving the Department of Education to teach at Hathaway Brown last fall, Collins polled students, who reported enthusiastically playing games like Super Smash Bros., a fighting game from Nintendo, and Just Dance, a motion-based dance game. Hardly any were interested in League of Legends.

“That got me thinking that maybe it wasn’t just the structure of some of these things,” Collins said. “Maybe it was the game selection.”

Collins helped organize a league comprised of 10 schools and libraries from varying backgrounds, including rural, urban, underserved and all-girls. In order to attract a wider selection of students, a panel selected three games for the first year of the league. It settled on a sports game (Rocket League), a digital card game (Hearthstone), and a multiplayer online battle arena game (Heroes of the Storm) — not the games requested by female students, necessarily, but none with reputations similar to League of Legends, either.

Ninth grader Claire Hofstra was among the most enthusiastic respondents, and Collins asked her to find four other freshmen to fill out a Heroes of the Storm squad. Even though the game is similar in playstyle to League of Legends — the kind of thing girls supposedly don’t like — the ninth graders enjoyed it so much they continued to get together and play, even when the season ended.

The benefits for the girls were plenty. Julianna Reineks was in her first year at HB and lives an hour away from the school, and the esports team helped her make friends. Kaila Morris, another freshman who described herself as “pretty shy,” found her voice as a broadcaster during the league’s championship matches. And Hofstra — an avid gamer before joining the HB team — overcame the peer pressure she felt at her previous public school to give up gaming.

“This helped me stick with it,” she said. “I definitely felt the pressure, just because I’m a girl, people don’t really take you seriously.”

All three students who spoke to The Associated Press plan to return to the esports team next season, and they’re hoping the league will adopt games even better targeted to them and their friends — Super Smash Bros and Splatoon are the big ones. They’re still a few years off from making college decisions, but all three also said they’d consider playing collegiate esports, especially if a scholarship is involved.

It’s a small but encouraging step to Collins, who is transgender and has felt alternately better connected and more isolated from people in their own life because of video games. Perhaps the most heartwarming takeaway from the first-year esports league for Collins was that the loudest complaint from students was they didn’t get enough interaction with kids from other schools.

“Games can bring people together. They can just sit down and start playing together. That’s a beautiful thing. We need to make sure that the systems that we have in place encourage that instead of discourage that.”