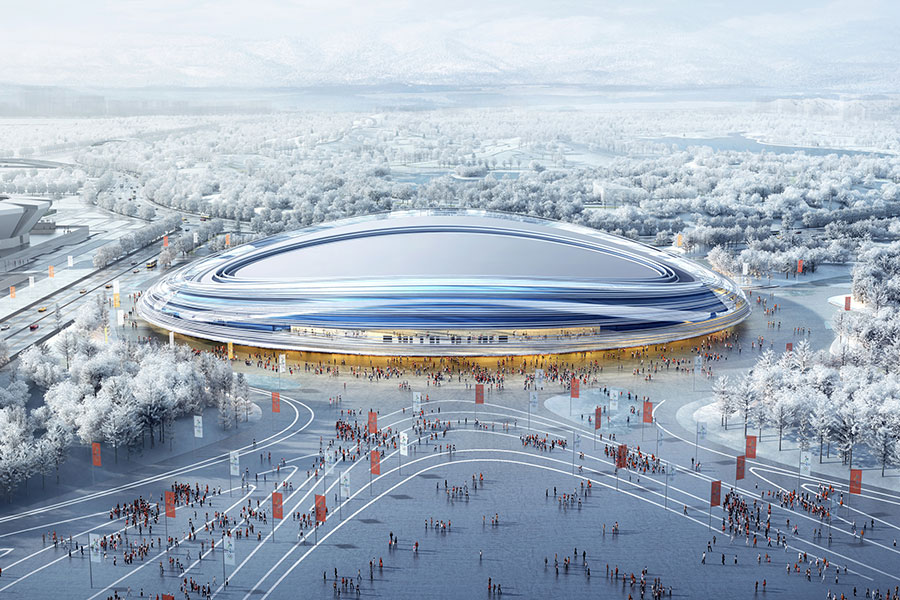 A design picture of the National Speed Skating Oval for long-track speed skating in Beijing. (Provided to China Daily)

The preparation of the 2022 Winter Olympics is well under way, as all the major venues and facilities are scheduled to finish construction this year.

Events of the Beijing 2022 Winter Olympics will take place in 25 venues in downtown Beijing, the suburban Yanqing district, and Zhangjiakou in Hebei province.

Apart from the new venues, Beijing is also making use of existing sporting venues. Out of all the 13 Winter Olympics venues, 11 were used in the 2008 Olympics. At present, five of the existing venues are being reconstructed.

Another aspect of the preparation work is the transportation network between the three competition zones. The Beijing-Zhangjiakou high-speed railway is currently under construction, and it will link up the three zones once completed.

Beijing vowed in its bid for the Winter Olympics that it expects to see 300 million people to participate in winter sports, and has since been working towards this goal.

According to Shen Xue, president of the Chinese Figure Skating Association and retired Olympic champion, the national sporting program has formed 31 training teams, covering all 109 competition events of the 2022 Winter Olympics and involving nearly 4,000 athletes and coaches.

Beijing also launched merchandising program to help finance the games. According to an official of the organizing committee, Beijing has licensed more than 500 official products so far with sales exceeding 200 million yuan (about US$30 million).