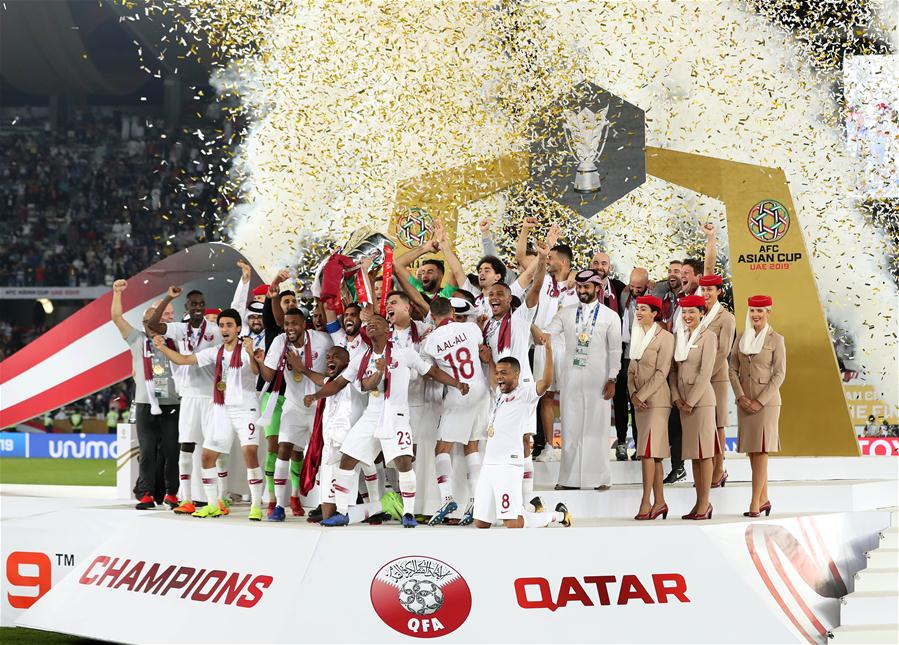 Players of Qatar celebrate on the awarding ceremony after the final match between Japan and Qatar at the 2019 AFC Asian Cup in Abu Dhabi, the United Arab Emirates (UAE), Feb. 1, 2019. (Photo: Xinhua)

Qatar were crowned the Asian champion with a seven-game winning streak, scoring 19 goals and just conceded one.

Almoez Ali, the top scorer of the tournament, opened the scoring after 12 minutes with an acrobatic volley assisted by Akram Hassan Afif, who delivered his ninth assist in the tournament. Ali broke Iranian legend Ali Daei's record of 8 goals in a single Asian Cup.

The 22-year-old striker almost had a brace one minute later, but his shot inside the box was deflected for a corner by Japan captain Maya Yoshida.

Japan, who had never lost in the Asian Cup final, pushed for the equaliser but things got worse after 27 minutes as Abdelaziz Hatim doubled Qatar's lead by curling an unstoppable shot from distance into the far corner.

Qatar nearly made it 3-0 10 minutes before the break as captain Hassan Al Haydos hit the post from close range. With the halftime approaching, Japan failed to turn their dominance of possession into clear chances.

The Samurai Blue looked much sharper after the break, Takumi Minamino pulled one back in the 69th minute with a clinical finish after being well set-up by Yuya Osako.

However, Qatar's nerves were settled minutes later when Abdelkarim Hassan's header from a corner hit Maya Yoshida's hand. The Video Assistant Referee (VAR) offered referee a chance to review it and, after a brief period, Afif converted the penalty to seal the win.

Maya Yoshida had an opportunity to make up for the handball but sent his header over the bar with two minutes remaining.