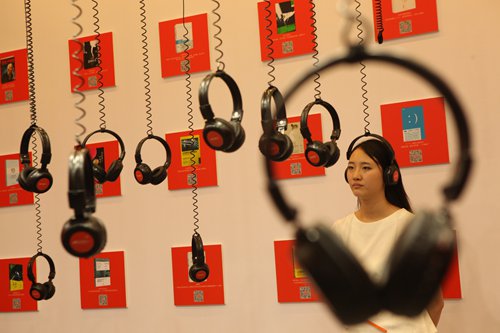 A woman listens to an audiobook through the Ximalaya FM platform at a booth at the Shanghai Book Fair in 2015. (Photo: IC)

A man spent more than 13,411 yuan ($1,963) in the first half of this year on Ximalaya FM, a popular audiobook platform in China, with favorite books including Harry Potter and the Order of the Phoenix and Poor Charlie's Almanack.Such is the portrait of the user who spent the most money on Ximalaya FM during the period, which was unveiled in a report released by the think tank TopKlout in late July.Riding high on the momentum of audiobooks and e-books, along with CITIC Press Group, the app epitomizes the ever-changing and evolving industry, as well as the way alternative reading methods are injecting new life into books and the way they are received.Reviving the classics"We've accumulated 470 million users during the six years since our founding," said Wu Ting, from the public relations department of Ximalaya FM. "More than half of the user flow was brought by audiobooks, and most active users listen to more than 15 books a year."The popularity of classic novels cannot be understated. Ming Dynasty (1368-1644) novel Jin Ping Mei, or The Plum in the Golden Vase, tops the literature category on the platform, having been listened to more than 40 million times.Other classics such as a collection of Austrian novelist Stefan Zweig's works and Border Town written by reputed Chinese writer Shen Congwen, also number among the eight classic books that have received more than 10 million listens.For Shen Dayuan - vice general manager of CITIC United Cloud Technology, a content-oriented Internet company set up by CITIC Press Group - the combination of stories and audio is key to the revival of classic works on the platform."Performing the stories with voices is a whole different way of expression and another art form," he said, drawing an analogy between audio novels and the still popular traditional Chinese art forms of cross-talk and sketches. "It's got an attraction of its own.""Our best-selling audiobook is Sapiens: A Brief History of Humankind, as we invited Luo Xin, a famous TV host in Shanghai, to record the audio," he said. "As the book is already a bestseller in other forms, it should be no surprise that the market has reacted so positively."Wu believes audiobooks help people make the most of brief time fragments and meets demand for saving time, given the frantic pace of modern life."Similar to what it did for books, the industrial chain of audiobooks can in turn provide more possibilities for the traditional Chinese publishing industry," she said. For instance, Ximalaya FM asks customers to vote for books they want to listen to, and the platform arranges recordings and productions of the most popular choices.Audiobooks in China have enjoyed an upsurge in recent years. According to a report published in April by iiMedia Research, another Chinese think tank, the total market value of audiobooks in China rose from 2.37 billion yuan in 2016 to 3.24 billion last year, and is expected to reach 7.83 billion yuan by 2020.Book market coming of ageFor e-book dealers, with the debate over whether e-books will ever replace printed books cooling, they are already looking for ways to take advantage of the evolving market and guide their customers."Take The Qin Empire as an example," Shen said as he spoke of the six-book historical novel series based on the history of the Qin Dynasty (221BC-206BC) that was first published in 2008. "We priced it at 199 yuan when we released the e-book two years ago, which most readers found unacceptable.""So we changed our strategy into pricing it at five cents per 1,000 characters, which literally would cost no less than the original if one finished the series."A year later, the series became CITIC Press Group's best-selling e-book of 2017 on iReader, a major reading platform for e-books, enjoying a new life almost 10 years after being published.The example reflects not only the potential in e-books as a more convenient reading method, but also a coming-of-age for the consumption habits of Chinese consumers.According to the iiMedia report, the number of Chinese who paid for online content doubled from 93 million in 2016 to 190 million in 2017, and is expected to grow by a similar margin to reach 296 million this year.The trend is benefiting the audiobook business, and driving its insiders to change their strategies.Apart from the aforementioned crowd-sourcing approach, Ximalaya FM is already allowing users to give "hosts" of audiobooks rewards, much like popular live-streaming platforms.Moreover, they are looking to spend 3 billion yuan to support audio producers. "We'll try to enable every possible way for good hosts to profit from their work, such as by providing subsidies and signing bonuses," Wu said.