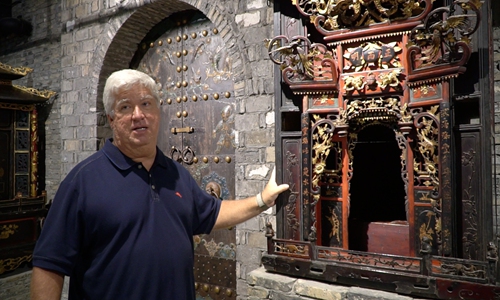 Most museum-visitors may hardly believe that the 40,000-plus exhibits of Chinese ancient wood and stone carving spread over a total exhibition area of 18,000 square meters in the spacious Six Arts Museum in Lili town, Suzhou, East China's Jiangsu Province, were all collected by an American collector. And, that's barely his complete collection!

Over the past 40 years, 58-year-old Mitch Dudek has traveled across China and collected over 100,000 wooden and stone antiques dating back to Ming and Qing dynasties and the Republic of China, which he said cost him all his lifetime savings.

The museum, located in the ancient town, reopened on May 1, after a hiatus of about three months due to the COVID-19 epidemic. Once swarming with visitors, the museum's large interior currently misses its usual bustle. Fifty thousand visitors thronged this popular museum during the first four days after its inauguration on April 28, 2018.

Although fewer visitors mean less income, Dudek doesn't think it makes a massive difference to private museums before and after the coronavirus outbreak. "Because we are a private museum, we always have financial difficulties. I think museums never make money. So, we always have to find funding for the museum outside of just selling tickets," Dudek told the Global Times on Friday.

Dudek's initial intention was not to collect the old items to profit from a museum but to save the exquisite antiques from extinction due to the continuing urbanization of China that witnesses the demolishment of old houses and temples in the villages.

Born in the US State of Ohio, Dudek used to visit China every summer in the early 1980s when he was a student. He has been living in Shanghai since 1998, and continues to spend his adulthood in China.

Since the COVID-19 pandemic broke out, he has never left China for the US. He is so satisfied with the result of the Chinese people's combat against COVID-19 that he can't wait to take off his masks and live his daily life like before. As an American national who has witnessed Chinese people's successful triumph over the COVID-19, Dudek hopes that "the US can also come through its difficulties as quickly and as successfully as China has."

Despite being a partner in Morgan Lewis international law firm and dealing with international corporations' finance, investment, mergers and acquisitions as an attorney, Dudek's real interest; however, is collecting artworks and antiques.

In those old days when there was no bullet train or the convenience of quick exchange of photos via smart phones, Dudek had to travel across the country on slow trains for several days and nights to get to the remote villages to personally check those items.

While most Chinese wooden antique collectors are enthusiastic about collecting redwood furniture made of valuable rosewood or red sandalwood, most of Dudek's collections are creations of common wood.

He finds it utter intriguing that so many people collect items, particularly furniture, based on the type of wood rather than the art. He compares this to someone buying a Picasso painting just because of the type of paper used instead of the invaluable piece of art.

Although Dudek does have those pieces of redwood in his collection, as well, he thinks the value is in the carving and design, which means somebody, invested a great deal of time and effort to conceive the art and brought it into fruition.

Dudek's first collection was a pair of miniature carved jade lions. Although he could not recall the exact amount, he is certain that it was for a meager price as it was in the early 1980s.

Neither could Dudek give a specific figure of the total amount of money he has spent on his entire collection. "I don't know exactly how much I've spent, but I've been collecting for continuously over 30 years," Dudek said.

Before the museum was established in Suzhou in 2017, Dudek's entire collection had once occupied six warehouses in Qingpu district, Shanghai. He is happy to showcase his collections at the museum to the Jiangsu dwellers, as well as tourists from neighboring Shanghai and Zhejiang.

The four-story folk arts museum has over 30 different sections that showcase over 40,000 exhibits in different categories such as sedan chairs, statues of gods, corbels, palanquin shrines, plaques, medicine cabinets, beds, chairs, screens, and stone statues. The exhibits put on display are changed regularly since there are still another 60,000 items stored in warehouses.

Dudek's favorite items are the corbels, which are the corners that connect pillars and beams. He thinks the corbels were often the most beautifully carved pieces in the entire house in ancient times.

Unlike other museums where the exhibits are carefully protected by glass cases or windows, the exhibits at the Six Arts Museum are devoid of any excessive protection, and visitors are allowed to touch them.

"We want people to actually be able to come close to the pieces, to even touch them if they want to, because we want people to fully experience the art," said Dudek, adding that people need to look very closely at the artworks to espy the details and appreciate their beauty.

Of course, the more the visitors touch the exhibits, the higher is the maintenance cost. But Dudek knows that ticketing revenues can never be the major source of funding for a private museum.

"So you have to fund a museum with some other way," said Dudek, who anticipates profits drawn from his newly opened wooden antique characterized restaurant and hotel, currently under construction, can fund his museum in the near future.