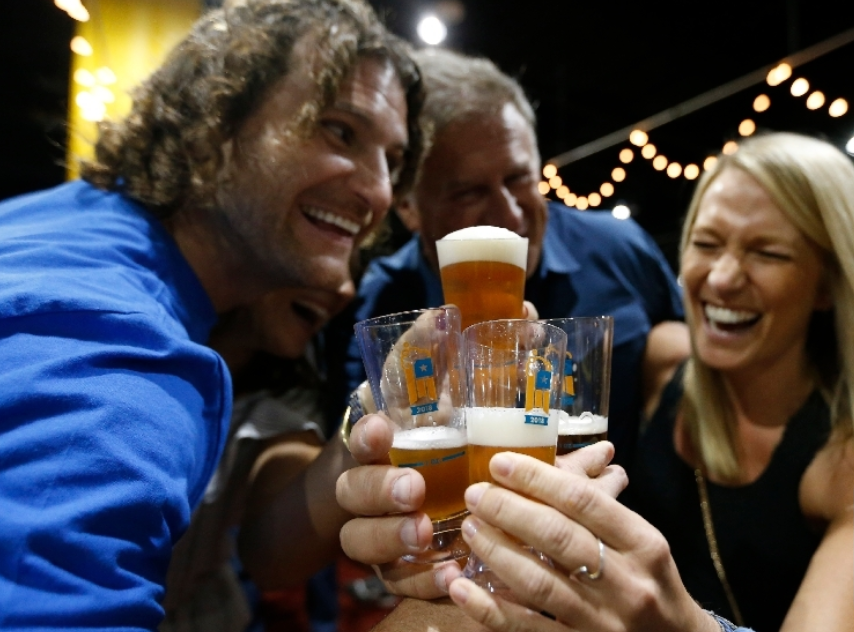 LONGMONT, the United States, Sept. 30 (Xinhua) -- The taproom at Wibby's Brewery north of Denver was filled with the happy chatter of more than 100 locals Saturday afternoon, and outside in the bright Colorado sunshine, musicians were playing to another crowd.

"This is the future of the beer experience in America," said patron Josh Garner, 32, whose Black Labrador retriever sat patiently by his side at the main bar, surrounded by tables filled with adults playing Monopoly and children drawing with their parents.

"We call it the taproom phenomenon," said Robert Pease, president of the Brewers Association (BA), America's craft beer voice since 1978 when BA had 42 members.

Some 6,800 craft breweries dot the American landscape in Denver and a majority feature the newest American cultural attraction - the taproom.

"It's where men, women, kids, dogs, and families will go together to a small, independent local brewery, and sample beers there in a more welcoming environment," Pease told Xinhua.

Thanks to such innovative approaches, craft beer has climbed to a $25 billion industry and taken a 23 percent chunk out of the traditional, American light pilsner's market share.

"When you go to a guest house, or a pub, you don't see televisions, you'll see people actually having to talk to each other and interacting with each other - put away your phone and pretend like it's 1985, and talk to somebody. We think that's great," he told Xinhua.

The crowd of all ages at Wibby's fit Pease's description, mostly focused on conversation and beer tasting.

"This brewpub is quickly becoming an institution and landmark in Longmont," Garner told Xinhua, while sipping a Moondoor Dunkel, a silver award winner in 2017 Great American Beer Festival (GABF) competition.

Longmont, 65 kilometers north of Denver, is a big town standing at foothill of the Rock Mountain.

The industry has attracted many young, 30-something American entrepreneurs, Pease noted, and Wibby's again follows suit.

Wibby's opened in 2015, when Ithaca college pals Ryan Wibby and Ted Risk bought and renovated an old building in an industrial past of Longmont that was once part of a turkey processing plant.

"You see many of America's new brewpubs started by young entrepreneurs, who have uplifted neighborhoods in inner cities by offering a festive establishment where people from the community can gather," Pease said.

Wibby, who turns 34 this December, completed a six-month Certified Brewmaster Course in Berlin before launching the brewery just three years ago.

"The craft beer revolution is now a global phenomenon, and not just confined to the United States," Pease told Xinhua, adding, "China has the biggest beer producing and consumption market in the world, and that is very attractive to us."

Brewery owners were quick to express their hope in entering the lucrative China market.

Thus far, 20 craft breweries have entered the Chinese market, including East Coast breweries Brooklyn and Saranac from New York, and Victory Brewing from Pennsylvania, and most recently, Left Hand Brewery Company from Longmont of Colorado, according to Pease.

The BA president has been traveling to China for 10 years to promote the export of American craft beer, has hosted Chinese distributors in the US, and has seen "steady and incremental growth" in the Chinese market.

"China right now is our fifth largest market," he said, noting that the biggest challenge facing American exporters to China "is a lack of cold chain infrastructure - shipping, storing, and serving the beer cold," Pease said.

BA participated in the spring Beijing National Craft Beer festival in conjunction with Beijing's Great Leap Brewing, founded in 2010, where Pease discussed ways to bring American craft to the world's most populous nation.

"We met retailers, and distributors who understand what it takes to be successful," he told Xinhua. "It's not going to happen overnight, but we've gone from zero to 20 breweries selling their beer there. We have recognize the potential of the Chinese market for our customers," he said.

As one of its innovative approaches to beer drinking, BA has been working with world-class chefs over the past decade to discover food offerings that compliment beer, much as wine enthusiasts have been doing for centuries.

A popular event at the 2018 GABF was called "Pairing" where

"We have 52 pairings in the room," explained BA executive chef Adam Dulye.

'We're really trying to show how craft beer and fine food can come together," said.

At another table, executive chef Alan Vero of Hearth and Dram in Denver offered Lamb Capiolo with "beet mole and crisp hominy," served on crackers to augment another Porter.

"We did a dinner in Shanghai last year at the craft beer exhibition," Dulye told Xinhua.

"I think China is one of the most exciting markets out there - not only to explore the cuisines of the whole country, but also where all of these new beer styles and innovations from American craft can help play into the picture," he said.

"Hop goes really well with the peppers that are present in a lot of their food," he said.

"You got deep, dark roasted malts that combine well with things that are roasted over the fire, you've got a lot of beers that have a subtle, flavor that go well with fish dishes," he said.

Chris Marx, 35, a regular GABF attendee from Chicago, was quick to promote the American cultural experience related to beer drinking.

"There are a lot of ways the American experience can be experienced in China, and what better way to do that then through craft brews the US?" he told Xinhua.

"This is one of the great cultural things that is going on in this continent right now, so we want to bring it across the ocean and show the Chinese what's going on in the US," he said.