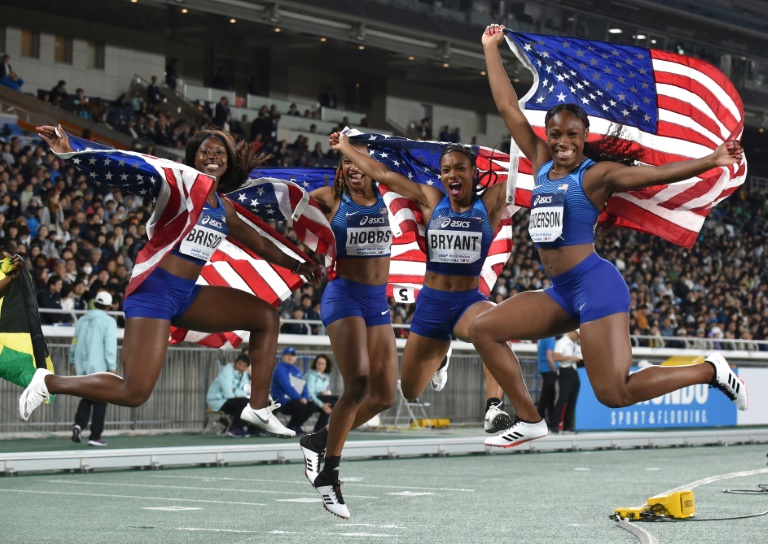 The United States' track athletes were left with bloody noses at the World Relays on Sunday but ultimately emerged victorious after a bruising two days of competition in Yokohama. (Photo: AFP)

American joy at finishing top of the medals table with five golds will be tempered by the disappointment of losing their proud unbeaten record in the 4x400 metres after electrifying performances from Poland and Trinidad and Tobago.

Team USA had dominated the event at the three previous editions of the World Relays but they were stunned by Poland's women as Justyna Swiety-Ersetic anchored the European champions to an upset win in three minutes, 27.49 seconds.

The Americans came up just short, the hot favourites settling for silver in 3:27.65 with Italy taking bronze.

"We can't believe it," said Patrycja Wyciszkiewicz. "It was such an amazing feeling to actually hit the line first."

Lightning struck again in the men's 4x400m final when Machel Cedenio produced an astonishing last 100 metres to give world champions Trinidad and Tobago gold in a photo finish with Paul Dedewo.

Cedenio ran a 44.41 split to give his team victory in a world-leading 3:00.81 seconds -- three hundredths ahead of the Americans, who were later disqualified, bumping Jamaica up to the silver medal spot and Belgium to third.

The US hit back in the mixed 4x400m, Jasmine Blocker building a huge lead to give anchor Dontavius Wright the freedom of Yokohama and he brought it home for a runaway gold medal in 3:16.43, almost two seconds clear of Canada with Kenya taking bronze.

France then pulled off a shock victory in the women's 4x200m after two fumbled handovers by a star-studded Jamaican team.

Maroussia Pare anchored the French to gold from lane nine in 1:32.16 after butter-fingered exchanges from Olympic champions Elaine Thompson and Shelly-Ann Fraser-Pryce.

China grabbed silver in an Asian record of 1:32.76 with Jamaica salvaging bronze after their American rivals suffered another disqualification.

"We were nervous about facing such big, big teams," admitted Pare.

"But even though we were running against Elaine Thompson and Shelly-Ann Fraser-Pryce, the magic happened!"

Jamaica failed to win a single event, their male sprinters coming up woefully short in the 4x100 and 4x200m as they continue to struggle without retired sprint king Usain Bolt.

The United States made no mistake in the men's 4x200m as Remontay McClain romped home in 1:20.12 with clear daylight between him and South Africa's Akani Simbine.

Aleia Hobbs then hung on to give the Olympic champions a fifth gold medal in the women's 4x100m ahead of fast-finishing Jamaica and Germany.

The Americans clocked 43.27 as Hobbs edged out Jonielle Smith by two hundredths with Rebekka Haase securing bronze for the 2017 winners.

But the US were unable to close with a hat-trick of wins after Brazil swept to a historic victory in the men's 4x100m, firing a further warning to Team USA before the world championships in Doha later this year.

A botched handover by American world champion Justin Gatlin left Isiah Young with too much work to do on the third leg.

After securing Brazil's first-ever World Relays gold, de Oliveira was mobbed by his team-mates as they celebrated wildly in the stadium where their country's footballers lifted the World Cup in 2002.