Everyone knew exactly where to find Christian Coleman this time. 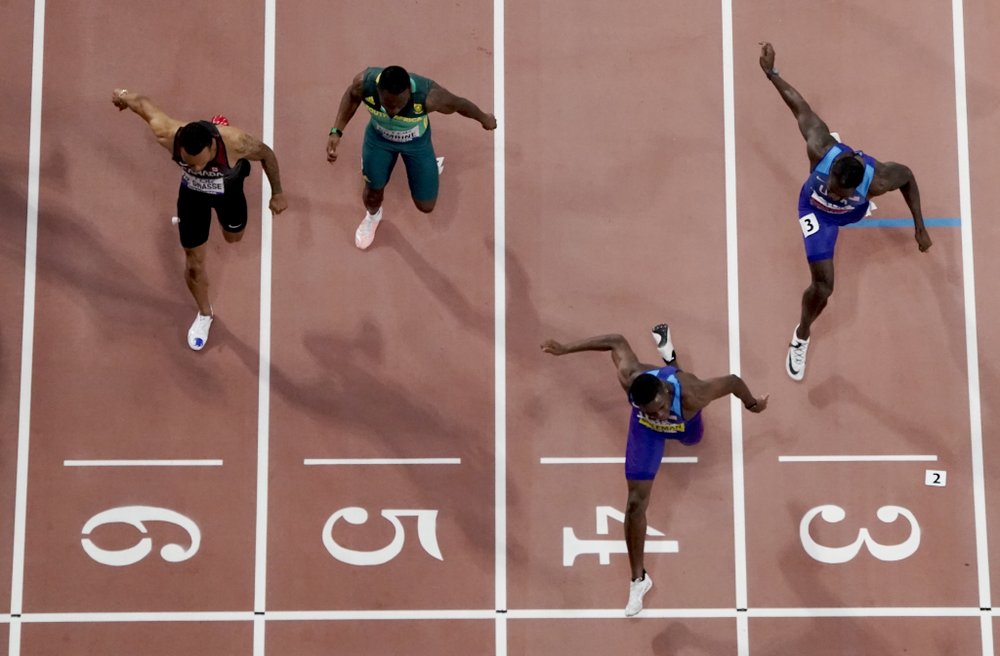 The sprinter who faced a suspension because he couldn't be located for drug testing burst out of the blocks Saturday night and powered to the early lead in track's marquee event.

He got stronger from there, blowing away the seven other entrants in the 100-meter world-championship title race and leaving little doubt about who will be chased, and who will do the chasing, in a reworked track landscape without the retired Usain Bolt.

Coleman's time, 9.76 seconds, might not have turned many heads, but this should: He beat Justin Gatlin to the line by .13 seconds — an entire body length. That marked the biggest blowout in a 100-meter race at worlds or the Olympics since 2011.

"This is something I'll never take for granted," Coleman said. "The opportunity to come out here and compete. And then to be crowned world champion?"

But Coleman's breakout night had few similarities to any that Bolt dominated over his 10 years of record-setting, reggae-fueled fun.

Even on the races everyone knew he'd win, Bolt brought the entertainment— and some drama — taking forever to unfurl his 6-foot-5 frame from the blocks, then working the first 50 meters to grab the lead, then leaving everyone hanging at the end to see what that clock might say.

Coleman, on the other hand, never trailed — the legs on his muscle-bound, 5-9 frame pumping like pistons from start to finish.

The differences on the second evening at the air-conditioned track in Doha weren't restricted to the men's 100.

Earlier, Jamaica earned its first gold medal of the championship. Not in its traditional sprints, but in the long jump, courtesy of Tajay Gayle, who won the country's first world-championship medal in a field event.

The Netherlands, home of speed skating and sprinter Dafne Schippers, took home its first 10,000-meter gold on the shoes of Ethiopian-born Sifan Hassan, who is making a smooth transition from middle distance to the long races.

And the United States found a surprising, maybe shocking, gold medal in one of the very few spots it hasn't dominated at some point in track and field's long history — women's hammer throw . It came courtesy of a softball player-turned-throwing star named DeAnna Price whose first experience hurling that big piece of metal resulted in her getting bonked in the head.

"I remember literally dropping it and saying, 'I'm never doing this again,'" she said.

Could anyone have blamed Coleman for thinking the same five weeks ago when his name started showing up in the headlines?

The leak of information about his troubles with the U.S. Anti-Doping Agency opened up a spigot of allegations and recriminations that followed him to Doha and could stay with him on the road to next year's Tokyo Olympics.

"It's pretty disturbing to know people out there say things and they don't know me personally at all," Coleman said. "But at this point, I'm over it."

His case involved three "whereabouts failures" that occurred between June 6, 2018 and April 26, 2019. Three failures in a 12-month span can trigger an anti-doping violation.

But the rules are technical, and there's a difference between not being where you say you're going to be and simply failing to update the app that tells authorities where you can be found. Because of those details, Coleman's first violation was backdated to April 1, 2018 — the start of the three-month period at which the original information is supposed to be inputted. That took his first violation out of the 12-month window and compelled USADA to drop the case.

It allowed Coleman to race here in Doha, but couldn't strip away the words "Coleman" and "Doping" that appeared in headlines worldwide.

Coleman, who has been subject to more than 20 doping tests over the past two years and never been hit with a positive, posted a long YouTube video to explain the situation. He came to Doha thinking that would calm things down. It hasn't, and at this point — with the 200-meter qualifying starting Sunday and relays on his plate later next week — he's done trying.

"I'm not spending much time trying to explain things to people who aren't interested in the truth," he said.

Best, perhaps, to let his running do the talking.

With Tokyo a mere 10 months away, Gatlin, who came in as defending champion, bronze medalist Andre De Grasse and Yohan Blake of Jamaica found out just how much room they have to make up.

When did Coleman know he had it wrapped up?

"From the start," he said. "I got up on top of everybody. ... I knew that if I was being patient, the end would take care of itself."

At the end, Coleman let out a primal scream, then pounded his chest twice and jogged a half-circle around the track, shouting into the stands. He blew a couple of kisses toward the heavens and kneeled for a brief second.

The half-full, 40,000-seat stadium was emptying. It was a far cry from the Bolt celebrations, all infused with reggae music, Jamaican flags, plenty of preening, picture-taking and the bow-and-arrow pose.

"There are so many people doing really good things right now," Coleman said. "Everyone should be celebrated. It doesn't have to be one face. I'm happy to part of that group."

Fair enough. But on the first big night of track without Bolt, Coleman found himself separated from that group, not running with it.