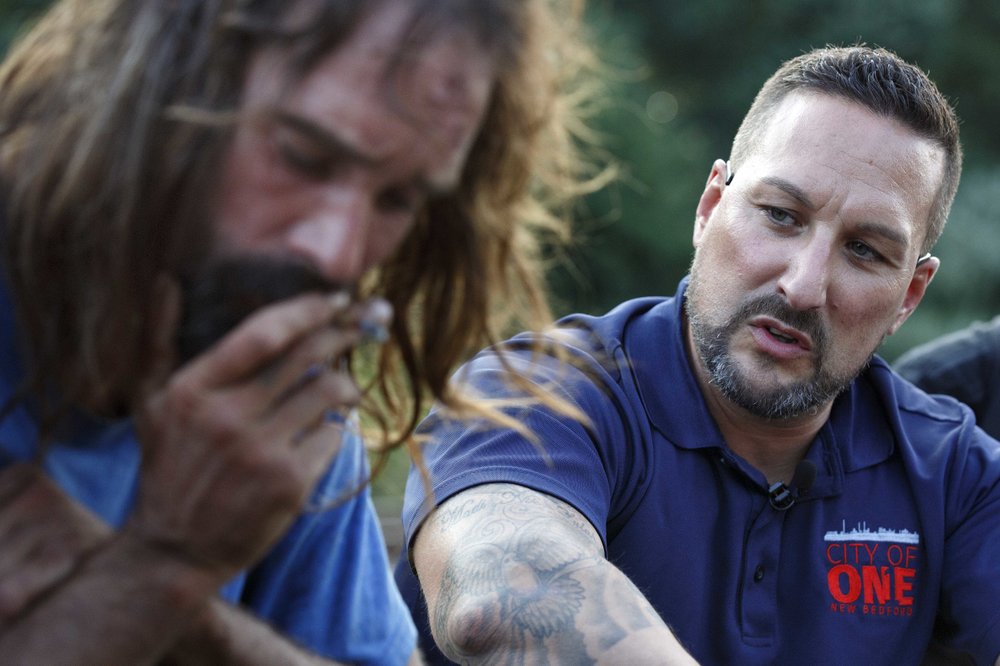 Sidewalk prayers near shoot-up spots. Sunday sermons in the back of a bar. Pleas to struggling souls to surrender to God. Funerals for members of their flock who didn’t make it.

Clergy members have become spiritual first responders in the opioid crisis, often leaving the pulpit to minister on the streets.

They can be reverends, rabbis, priests or pastors. Though their faiths differ, they invariably approach people with addiction as equals. No Bible-thumping, no blaming. Quite a few are in recovery themselves.

Despite some signs of a slowdown, the nation’s all-time deadliest drug overdose epidemic endures. Opioids were involved in most of the deaths, killing nearly 48,000 people last year.

A spiritual element to recovery is familiar to people who have worked 12-step programs, with their references to an undefined higher power. Scientific studies have found evidence that religious faith can help substance abusers with their recovery.

Working with addicted people means trips to hospital rooms and fresh graves. But there are flashes of light in the darkness, too.

Three dispatches from the front lines:

A CHURCH FOR IMPERFECT PEOPLE

Nine minutes into his sermon, Pastor Brad Hill made a confession.

“I gotta be honest. I ask myself a lot of the times, ’God, why did you allow me to be an addict?” Hill says from the pulpit of his Grace Downtown Church. “Why are my friends dying of an overdose? ... I gotta ask God, ‘Why, God, do you allow this?’”

Hill hears those questions a lot.

The church Hill started in the back of a Winchester, Virginia, bar moved this year to a space that can accommodate hundreds, many trying to turn the page on their addictions. Six and a half years in recovery, Hill calls it a totally judgment-free zone, “a church for imperfect people.”

Hill has a salty beard, smiling eyes and booming voice to sermonize about the suffering he sees so often in the Shenandoah Valley. His phone lights up constantly with messages from struggling people and their loved ones. One recent text read: “Do those who commit suicide still go to heaven?”

Too often, Hill speaks at funerals for overdose victims, three in the past three months alone. He honors the dead while telling survivors, “You don’t have to be like this person. There is a way out.”

A funeral in September for a 38-year-old married father of four was especially hard on Hill. They were friends, and Hill had been talking to him about his struggle just a week before he died. It was Hill who welcomed the man’s grieving family to a Sunday service.

“They lost one of ...” Hill swallowed, clapped his hands together twice, and continued in a softer voice. “They lost one of my favorite people. So I just ask that we pray real quick for them, OK?”

Hill’s own addiction to painkillers led to a prescription fraud conviction in 2007 and a yearlong jail sentence that cost him a thriving church in Virginia Beach.

About four years ago, he came to Winchester and started Sunday services in the backroom of a downtown bar called Brewbaker’s for a handful of people struggling with addiction. They’d drop a sheet over the liquor bottles before services.

It grew by attracting people like Matthew Fanning, who met Hill at a Narcotics Anonymous meeting.

Hill would talk about spirituality, but Fanning wasn’t ready to hear it until he relapsed into heroin addiction. Hill visited him in rehab in 2015, encouraged him and gave him Bible-based homework.

Fanning is now in recovery and a Grace Downtown regular.

The nondenominational church moved this year to a nearby strip mall with room to seat 400.

While some churches merely welcome the homeless, Grace Downtown picks them up in a van. Other worshippers come from local rehabilitation centers. Hill estimates that more than half who show up on Sundays are in recovery or related to someone who is.

NEVER STOP GETTING OUR HANDS DIRTY

Pastor Jamie Casey prays with addicted people all over New Bedford, Massachusetts. He joins hands with them in their living rooms days after overdoses, in hospital emergency rooms and on sidewalks in front of wind-beaten houses in this struggling city.

The 45-year-old associate pastor in a nondenominational church is part of a team of clergy from a variety of faiths who regularly crisscross town with police officers and counselors. Their goal is to get people into treatment and, if they will listen, to offer some spiritual advice.

“Surrender,” Casey told Brian Peets, who stepped out from his makeshift shelter beneath a railroad track platform.

“Surrender,” Casey repeated, alluding to his own addictions that started with alcohol and cocaine.

New Bedford logged 56 opioid-related overdose deaths last year, a per-capita rate a third higher than nearby Boston. Police hope such outreach ride-alongs can get struggling people into treatment before the next setback.

The three-person teams cold-call homes where there have recently been overdoses to see if anyone wants help.

On a recent evening, Casey put on his shirt with “CHAPLAIN” on the back to ride with Officer Scott Carola and counselor Peter Lagasse around the city in an unmarked car.

Casey had a list of addresses of recent overdoses. But when they knocked on doors, most people either weren’t home or weren’t answering.

The trio was unfazed.

The person who ignores you today might embrace you tomorrow, said the Rev. David Lima, who heads the Inter-Church Council of Greater New Bedford and directs the program.

Only a small percentage will get treatment, but participating clergy contend that it’s about more than numbers. Says Rabbi Raphael Kanter, quoting the Talmud, “if you save one life, it’s as if you’ve saved the whole world.”

They spotted James Sessine talking to friends on a busy corner outside a food market. The 29-year-old has struggled with addiction and recently has been living in a tent.

Sessine’s friends scattered as the car stopped, but he stayed and listened to Casey’s suggestion that he get a treatment slot.

Casey called a provider. Can they give him a time tomorrow? Yes.

Sessine got on the phone and promised he’ll be ready the next morning, meanwhile, “I’m going to walk around all night, like I do every night.”

“I shoot heroin daily,” Sessine explained a few minutes later, “and it’s coming to the point where enough is enough.”

Casey says his preaching, teaching and intervening is all part of his goal to “love people back to life.”

“My best friend and I, we made a deal,” Casey said, his voice catching. “He looked at me and he said, ‘Promise me we’ll never stop getting our hands dirty,’ And I made that promise to him and God, because had people given up on me, I wouldn’t be here.”

They picked up Sessine the next morning.

Casey looked for Peets too, but could not find him.

With his bushy beard and long gray robe cinched by a rope, the Rev. Giuseppe Siniscalchi would look at home illuminating manuscript in a monastery. But he and his fellow Franciscan friars are familiar figures on the sidewalks of Newburgh, New York.

They walk in pairs by row houses, empty storefronts and shoot-up spots in this Hudson River city. They offer people hot chocolate, iced tea or bagels along with their Roman Catholic blessings.

On one afternoon walking with the Rev. Antonio Maria Diez de Medina, the pair greeted men on a street corner, a mom on her front steps and kids on scooters. Diez de Medina greeted some people in Spanish.

A dark-haired woman ran up to them from across the street and proudly told him about her recovery.

She acted calmly, different from when Siniscalchi saw her sitting restlessly in a parked car months ago. He offered to pray for her. The two friars laid a hand on her shoulders as they all bowed their heads on the sidewalk.

She closed her eyes so tightly her nose crinkled.

The friars are not specifically looking for people struggling with drugs, but they make a point of walking past some of the most troubled corners of Newburgh.

This once-grand city about an hour north of New York City has a poverty rate higher than that of the Bronx. For every fixed-up row house, there is another run down or abandoned. A hospital two blocks from the friary reported that it saved the lives of 205 overdose patients over a year’s time.

“There been a few times where I’ve come across people with their little hypodermic needle kit ready to shoot up ... and you just say, ‘Hi. How are you? How you doing,’” Siniscalchi says. “They kind of recognize or get a sense of who we are, and a conversation ensues.”

The friars moved to an old church rectory here in 2016, establishing the St. Mary of the Assumption Friary. They take turns on the four-times-a-week walkabouts with Brother Peter Anthony Curtis.

In recent months, they started dispensing drinks from a metal cart they push down the streets. The rubber-wheeled cart sports a Jesus flag and a picture of Our Lady of Guadalupe, a resonant image in a city with a robust Hispanic population.

After two years, the sight of robed men with long beards chatting up people barely draws second glances. Quite a few people chat.

On one walk, a middle-aged bicyclist asked, “You guys Catholics or something?” He then had his silver crucifix blessed. A passing woman took a blue plastic crucifix that matched her clothes. At one point, Siniscalchi sat down next to a downcast woman, pulled out a crucifix and told her Jesus loves her.

“People don’t,” she replied, looking down.

That doesn’t matter, he said, Jesus does.

After a few minutes, the friars said goodbye to go greet more souls.