Amid plunking debate, MLB’s marketing is all-in on bat flips 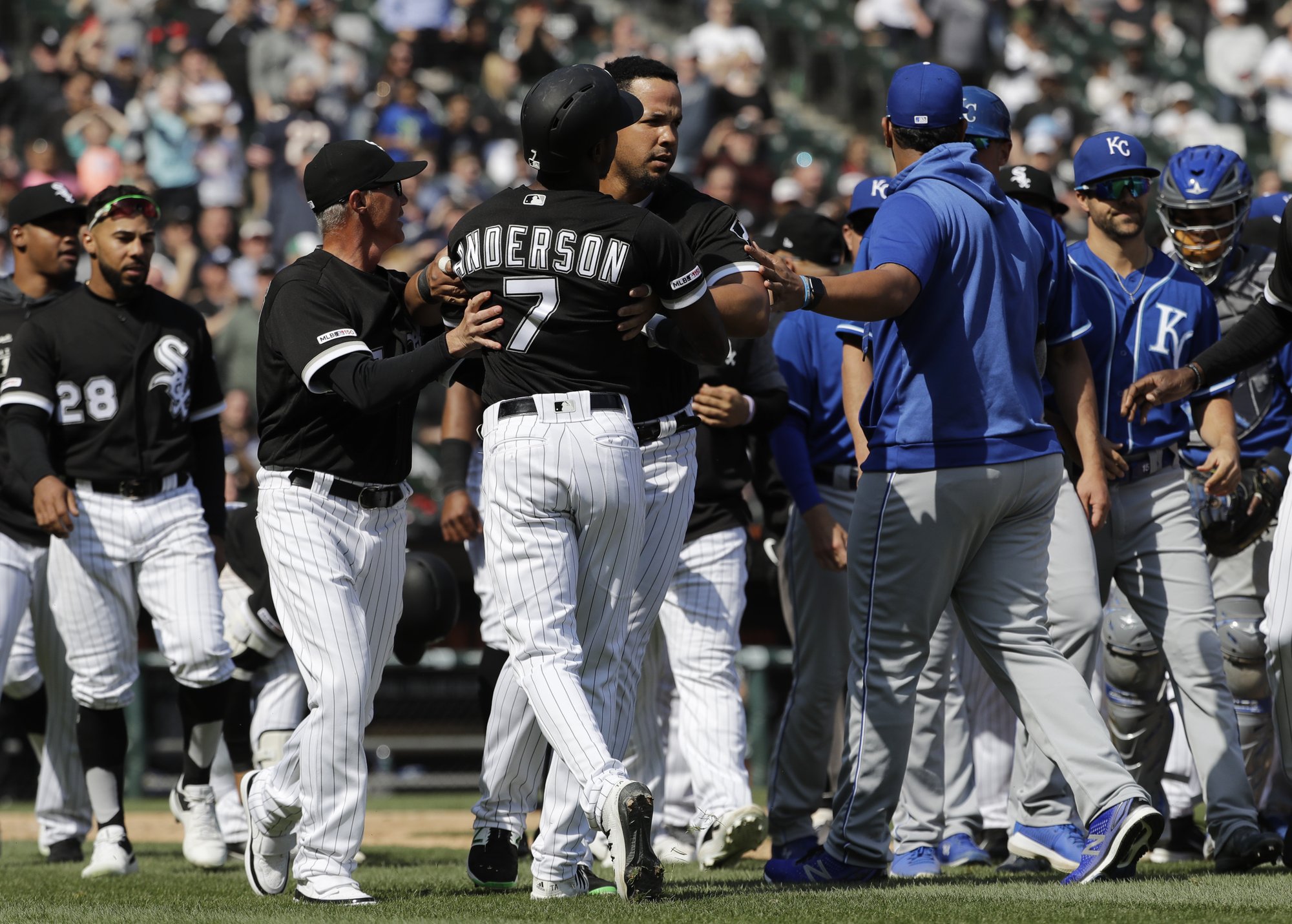 Chicago White Sox's Tim Anderson (7) is restrained by Jose Abreu after he was hit by a pitch from the Kansas City Royals, as benches cleared during the sixth inning of a baseball game in Chicago, Wednesday, April 17, 2019. (Photo: AP)

When Tim Anderson spiked his bat and yelled toward his White Sox teammates, Major League Baseball’s self-described “spicy” Twitter account was among the first to weigh in.

“LET THE KIDS PLAY,” proclaimed @Cut4 , the offbeat arm of MLB’s social media portfolio with nearly 1 million followers. The tweet Wednesday included video of Anderson’s bat toss, and it sparked hundreds of comments — some cheering the fiery display, some condemning it.

Baseball is stuck in an ongoing debate regarding on-field decorum, and MLB’s marketing department is leaving no doubt where it stands. Since the group was restructured just over a year ago, MLB’s promotional efforts have taken up arms against the old school. While traditionalists want to punish unabashed revelry with fastballs to the backside, MLB senior vice president of marketing Barbara McHugh wants her team feting those bat flips.

As Brad Keller’s fastball to Anderson’s backside showed, not everyone is buying MLB’s pitch.

MLB’s promoters have made their stance clear on social media. Cut4 and the league’s other accounts, including its main @MLB handle, routinely highlight players showing the kind of raw emotion Anderson displayed. When Keller, a right-hander with the Royals, plunked Anderson two innings after his homer, Cut4 doubled down.

“Imagine hating someone having fun this much,” @Cut4 tweeted with an image of the ensuing benches-clearing fracas.

Anderson’s antics and MLB’s response on social media highlighted the new marketing strategy, but it also underscored that the game’s rules haven’t caught up. Both Keller and Anderson were ejected from the game, and both were suspended by the league Friday. Keller was banned five games — one turn in the rotation for the starting pitcher — and Anderson was also banned a game “for his conduct after the benches cleared.”

ESPN, citing unidentified sources, said Anderson, who is black, called Keller, who is white, the N-word during the fray. Anderson didn’t go into detail Friday when asked what he said during the fracas.

MLB’s disciplinary system for such incidents is based on precedent, though the league is exploring potential changes to better discourage retaliatory plunkings.

The league has been criticized in recent years for failing to promote its top talents — two-time AL MVP Mike Trout, in particular — and McHugh’s group has made player marketing a top priority since she took charge in a department restructuring last year.

Those marketing efforts are clearest in its “Let The Kids Play” campaign. It debuted with an advertisement last Octoberthat featured emotional displays from players like Giancarlo Stanton, Javier Baez, Yasiel Puig and Mookie Betts. The ad used stern commentary from major league broadcasters as a foil to fun-loving bat flips, ending it with a message from a most notable baseball kid, Hall of Famer Ken Griffey Jr.

“I think we see ‘Let The Kids Play’ not just as a name or a hashtag or not just the name of a campaign,” McHugh said, “but really an overarching umbrella theme or rallying cry, if you will, to the work that we are dedicated to, which is to help promote our collection of diverse players and their personalities.”

Many see a cultural divide in regard to baseball’s “unwritten rules.” Traditionalists — often older, often white — urge players to respect the game by tamping down their emotions.

“If you’re going to come into our country and make our American dollars,” veteran pitcher Bud Norris told USA Todayin 2015, “you need to respect a game that has been here for over a hundred years.”

Latino ballplayers, like Puig or Jose Bautista, have been criticized for bat flips and other perceived shenanigans, even though their enthusiasm reflects a style of play that’s standard in their home countries — Puig is Cuban, and Bautista is from the Dominican Republic.

MLB reported that 28.5 percent of players on opening day rosters this season came from outside the US, including a record 102 from the Dominican Republic. That’s something McHugh hoped to reflect in MLB’s newest ad, ”Let The Kids Play 2.0 .” Six of the 11 players featured are non-white, including Venezuelan youngster Ronald Acuña Jr., Puerto Rican stars Carlos Correa and Francisco Lindor, and Japanese two-way sensation Shohei Ohtani.

“We’re confident and feeling good about the early momentum and acceptance,” McHugh said.

The league is also encouraging players to use fashion as a means of self-expression. It has loosened rules regarding on-field footwear — think Bryce Harper’s bright green Phillie Phanatic cleats on opening day — and it’s also trying to take more photo and video of players arriving at the park. McHugh noted that Manny Machado in particular upped his fashion efforts during last year’s World Series after he noticed the extra cameras.

Not everyone is thrilled by MLB’s efforts, particularly in regards to diversity. Although two African American players — Yankees sluggers Aaron Judge and Stanton — were featured in the most recent commercial, Red Sox ace David Price criticized the league’s efforts to promote black players just this month. He told MassLive.com it was “a joke” that Betts, his teammate and the AL MVP, wasn’t featured in that ad or any others currently on MLB Network.

Asked about Price’s comments, McHugh said “we love Mookie Betts” and that she hopes to feature him in an ad soon.

“We cast a wide net and always have a long wish list of players from across the league that we wanted to include,” she said, adding that “we’re looking forward to working with Mookie on something next.”