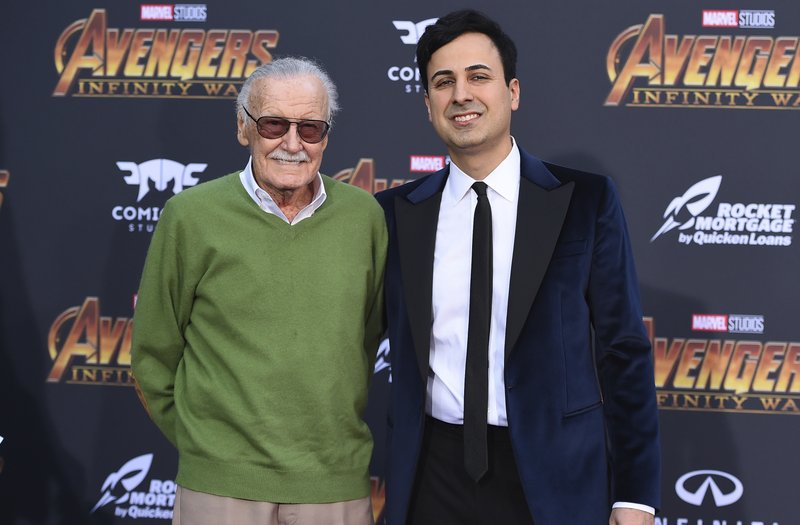 It has been another epic year for characters Stan Lee helped create, with “Black Panther” and “Avengers: Infinity War” earning more than $3 billion combined globally and “Ant-Man and the Wasp” still to open next week, all three featuring the clever cameos beloved by devoted fans of the Marvel Comics mastermind.

But for Lee himself, the past year has been tough and tumultuous. After the death last July of Joan, his wife of 69 years and partner in all things, the 95-year-old has found himself in the middle of a fight over his finances and legacy that has led to lawsuits, a restraining order and a police investigation of elder abuse.

His exact circumstances may be unique, but Lee’s status as a celebrity in declining mental health and vulnerable to exploitation has many precedents and may become increasingly common as a wave of wealthy baby boomers reaches old age.

Into the void left behind by Joan Lee poured many acquaintances seeking a part of her popular and accommodating husband, and holdings his lawyer estimates are worth between $50 million to $70 million.

Probate attorney Troy Martin, who has worked on the cases of many late-in-life celebrities, including Casey Kasem, said Lee’s circumstances made him a compelling target.

“He’s going through the grief of a wife he relied upon. He’s always had the reputation for being a people pleaser, and you add his grief to, at 95, some cognitive difficulties, it makes him vulnerable,” said Martin, who is not involved in Lee’s case.

Key to Lee’s situation is his only child, 68-year-old Joan Celia “JC” Lee, who has been dependent her entire life on her father, according to a sworn declaration signed by Lee in February that was drafted by attorney Tom Lallas.

Several “bad actors with bad intentions ... have insinuated themselves into relationships with JC ... to try to take advantage of me to gain control of my assets, property and money,” the declaration said.

Lallas was fired after drafting the declaration, and many of Lee’s longtime employees have been dismissed, according to a February story in The Hollywood Reporter.

One of the “bad actors” named in the document, Keya Morgan, a memorabilia dealer and Marilyn Monroe aficionado, appeared to gain control over Lee’s life and affairs for the next several months. Morgan has vehemently denied that he has had any intentions other than helping Lee.

During that time, two lawsuits were filed seeking millions from Lee’s past business partners.

On May 30, Morgan left Lee’s side briefly and returned to find that he was shut out as detectives and a social worker interviewed Lee to investigate elder abuse.

Morgan called 911 to report the authorities as burglars, which led to his arrest and jailing on suspicion of reporting a false emergency.

Lallas returned and was granted an elder abuse restraining order against Morgan June 13. He wrote in the filing that Lee has shown severe impairment with his hearing, vision, short-term memory and judgment.

It’s unclear who currently surrounds Lee and is managing his affairs. A series of court hearings for Morgan next week on the false emergency charges, a probation violation on an unrelated case that his arrest triggered, and the restraining order, may bring clarity.

Morgan, 42, did not respond to multiple emails seeking comment, and his cell phone has not been accepting messages for weeks.

But shortly after the restraining order, he tweeted :

“For over 10 years I have shown nothing but love, respect & kindness to Stan Lee, & his wife, a fact he has repeated countless times. I have NEVER EVER abused my dear friend. Everything you read in the #FakeNews is pure malicious lies & I will 100 percent prove it.”

Lallas and a lawyer representing JC Lee did not respond to multiple requests for comment.

Morgan’s restraining order does not allege he engaged in physical abuse of Lee, but that he isolated him from associates, friends and relatives, which is considered a form of elder abuse.

“Isolation is the No. 1 red flag for abuse,” said Kerri Kasem, who has become an advocate for the elderly and their adult children after having to fight to see her father, Casey Kasem, before his 2014 death. “Because when you take your victim and you isolate them, you can then abuse them physically, financially, emotionally, sexually.”

Lee finds himself in a late-in-life limbo that other celebrities, including Mickey Rooney and Peter Falk, have faced.

A conservatorship, giving a trusted person court-enforced control over his financial affairs, could be the next step.

While conservatorships can be abused it can be “a very necessary tool to protect somebody in his situation,” Martin said.

The fight over Lee may well be a forerunner to a big wave of similar battles to come as old age and decline arrives for baby boomers with huge entertainment holdings, including intellectual property that could pay off for decades, said Kenneth J. Abdo, another lawyer who works on entertainment estates, including Prince’s.

“Stan Lee’s a little older than a baby boomer, but culturally he’s a baby boomer,” Abdo said. “What we’re learning here is that our generation, our culture, is passing on. As much as we think we’re all bulletproof, we’re moving on. These things need to be planned.”

None of the turmoil has kept Lee from making another of his signature cameos in the latest Marvel movie, “Ant-Man and the Wasp.”

In it, Lee is thrown for a loop during an action sequence. Bewildered, he says, “Well, the ’60s were fun but now I’m paying for it.”