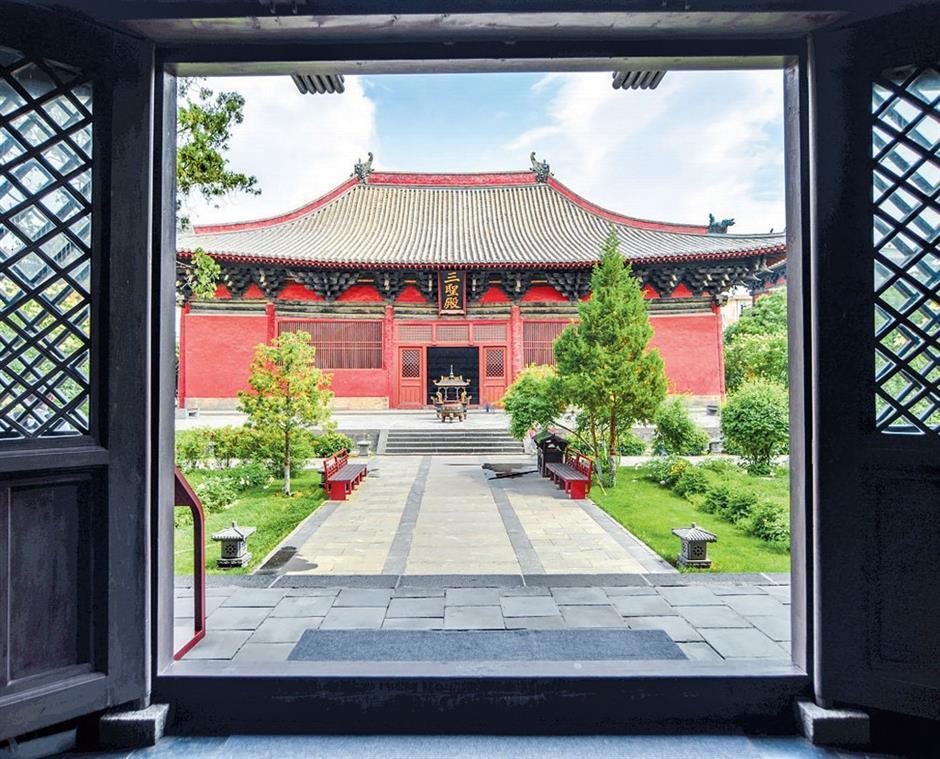 The Shanhua (Betterment) Temple is China’s best preserved and largest Buddhist shrine in the architectural styles of the Liao (907-1125) and Jin (1115-1234) dynasties.

Built just inside the southern city wall of Datong City in Shanxi Province, the Shanhua (Betterment) Temple is China’s best preserved and largest Buddhist shrine in the architectural styles of the Liao (907-1125) and Jin (1115-1234) dynasties, two empires that once controlled northeastern China.

The Five-dragon Screen is the first thing visitors see before entering the main gate. It was often set up to shield an entrance gate in traditional Chinese architecture.

Almost 20 meters long and 7 meters high, the lower part of the wall was vividly carved with various animals, such as ox, horse, snake and rabbit.

In bold colors with clean-cut lines, the five giant dragons in the middle fly in turbulent clouds, with the central one holding a fireball, head up high with a set of piercing eyes.

Past the dragon screen is the temple’s main entrance, also the Hall of Heavenly Kings in the Jin Dynasty architectural style, guarded on either side by a imposing pair of lions. As the biggest entrance of the Liao and Jin times, the construction was a sacred home to worship the four heavenly kings, who preside over the four directions of east, west, south and north.

Almost 3 meters tall, each king has been doing his job dutifully for centuries. The King of the East holds his pipa (a four-stringed musical instrument), and the King of the South plays with a sword. The West King dances with his snake, while the North King lifts a tower in hand. They were all made during the Wanli Reign, but re-colored during the Republic of China (1912-1949).

The Sansheng (Three Sages) Hall was a sacred place for the three saints in the Flower Adornment Sutra: the Wenshu, Puxian and Shakyamuni Buddhas.

The hall was built on a platform 1.5 meters high, with a spacious plaza in front.

What made the construction so special was its dougong, a system of brackets inserted between the top of a column and a crossbeam. It adopted dragon-head dougong, different from those commonly seen in the Liao and Jin periods. Among them, there was a huge skew-arch dougong, which had been eliminated due to its overly complex structure. It was impractical and overly decorative.

The dougong systems in the Sansheng Hall were praised by the architectural historian Liang Sicheng (1901-1972) as “stable and solemn, with infinite power.”

The Great Buddha’s Hall, in typical Liao-style, is the third largestone in China. Covering more than 1,000 square meters, the hall was constructed on a 3-meter high platform.

It features a set of three entrance doors, not the single entrance often seen in other Buddhist halls. The design, influenced by early clay-and-wood hybrid construction, was intended to reduce the load on the wall.

In addition, above each door there is an ornamental plate that looks like an Islamic compound arch. This decorative door design became popular after Buddhism was introduced to China, because it combines the shape of a door and a Buddha niche, welcoming the most distinguished guests. A total of 34 Buddha statues create a complete world of Buddhism.

Their students, all in the Liao and Jin-styles, stand to the side, while 24 protectors in varied postures and expressions line up along two sides.

They were fierce-looking heavenly guards in the Buddhist sutra, but here in the hall these protectors were turned to handsome boys, graceful ladies, long-bearded grandpas, polite scholars and muscular wrestlers. They are the worldly interpretation by ancient skillful craftsmen.

On the southern and western walls, the murals, all painted from 1686-1708, tell the stories of Buddhas. They cover more than 190 square meters.