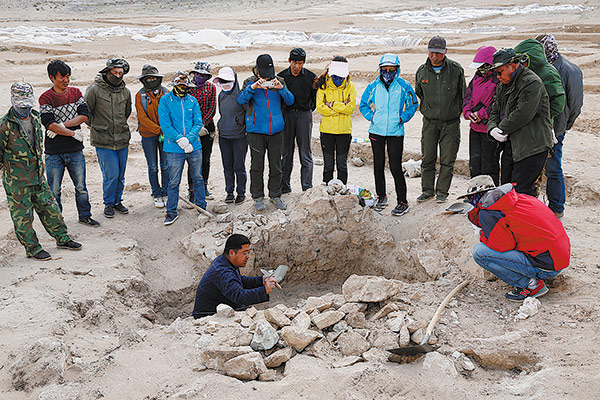 Chen Guoke, head of Gansu Provincial Institute of Cultural Relics and Archaeology, introduces a jade mine site in the Mazongshan area to students in 2016. [Photo provided to China Daily]

After discovering a special interest at a site in 2007, Chen Guoke has become a preeminent practitioner in the field of archaeology, Wang Ru reports.

Twenty-two years ago, a young man from Jingning county, Gansu province, was choosing his major, and the university at which he would study it, after gaining good grades in the college entrance exam. His parents, a coal miner and a farmer, were both illiterate and could not offer constructive suggestions to their son about his options.

Considering the climate and living expenses, the young man, Chen Guoke, decided to apply for Sichuan University. He applied for both journalism and archaeology majors, and was eventually enrolled into the latter.

"Journalism is about the new, while archaeology is about the old. They seemed to be two extremes for me. I was immature and wanted to play with my destiny, so I filled in my application form in this way as a joke," recalls Chen, who is now 42.

According to Chen, archaeology was not very popular at that time, and he just knew it was about history, a subject in which he had a vague interest. What he didn't know, however, was how to utilize it after learning this major.

The decision decided the path of his life, as he became a professional archaeological researcher, devoted to field excavations and making impressive discoveries, despite all the hardships he encountered along the way.

After graduation, in 2004, he returned to Gansu, and started to work at the Gansu Provincial Institute of Cultural Relics and Archaeology. According to Chen, in recent years, archaeological work there has mainly focused on the origin of Chinese civilization, the spread of agriculture and the exchanges between different ethnic groups.

Located at the juncture of the Qinghai-Tibet Plateau, Mongolian Plateau and Loess Plateau, Gansu has been an important crossroads for communication between the China's east and west and, as such, nurtured diversified cultures. The east and west flanks of the Liupan Mountain in Gansu are important areas in the birth and development of Chinese civilization, as proved by excavations at the Nanzuo site in Qingyang city. The Hexi Corridor, the main artery of the ancient Silk Road in Gansu, was an important channel for cultural exchange.

When Chen became engaged in a project to study the ancient metallurgical sites in the Hexi Corridor in 2007, he developed an interest in archaeometallurgy, which he found "could further answer archaeological questions in a laboratory". As a result, he applied to learn it as a workplace postgraduate degree, and between 2008 and 2015, pursued his master's and doctorate at the Institute of Cultural Heritage and History of Science and Technology at the University of Science and Technology in Beijing.