Born in Southwest China's Chongqing, local artist Xu Bing has created a niche and impressive body of art that has been put together into a book of symbols. 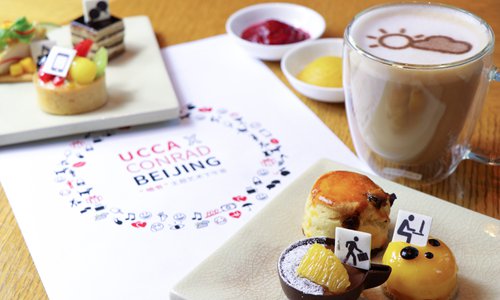 No matter what cultural background you are from, as long as you are involved in contemporary life, you will be able to understand his works.

At the opening of the Xu Bing: Thought and Method exhibition in Beijing, the Conrad Beijing and the Ullens Center for Contemporary Arts (UCCA) launched a "Xu Bing's symbol book and customized afternoon tea" to express today's moods seen in Xu Bing's works and to enjoy a few relaxing hours over afternoon tea.

As one of the most influential artists on the international stage, Xu Bing has been devoted to the exchange of Eastern and Western cultures, transcending cultural boundaries and expressing their ideological and practical problems in a visual language.

Whether from his work Book from the Sky (1987-91), Ghosts Pounding the Wall (1990-91) or his first feature-length film Dragonfly Eyes (2017), Xu Bing's creations are based on a large amount of research and have been concerned with many issues from past decades to modern day.

The artist adheres to the essence of the plain and sagacity of oriental culture but faces a wider world. His works are very forward-looking and vigilant.

At the same time, the appearance of his works seemingly in the East and the misplaced, touch on multiple social issues and cultural categories.

The mutual excitement provides a variety of channels for visitors to enter and explore.

The UCCA is holding the Xu Bing: Thought and Method exhibition from July 21 to October 18, one of the most comprehensive exhibitions of artists in Beijing in recent years.

The exhibition is being jointly planned by Tian Feiyu, director of the center for contemporary art and guest curator Von Boi.

Conrad Beijing's personalized afternoon tea will feature Xu Bing's famous symbol book on each table, and there will be personalized menus also available for added interest.

While you study these famous symbols, you will have the opportunity to learn and translate them to create your own story featuring his famous sign language symbols.

Don't miss an opportunity to ponder, enjoy and study one of the worlds' most respected and admired living artists whilst enjoying Conrad's legendary afternoon tea service, complete with savory and sweet morsels from their award-winning pastry team served with organic tea or select coffees.

The Mindfully Lighter Afternoon Tea contains eight sugar-free, one gluten-free and three low-sugar and low-salt choices for you to indulge in guilt free.