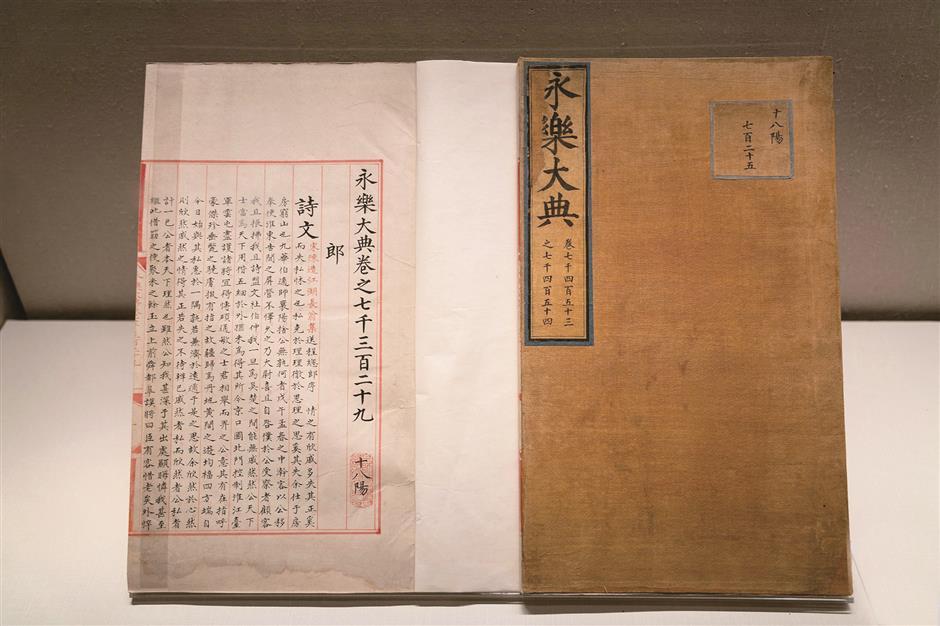 More than 300 years before the publication of “Encyclopedia Britannica,” the oldest English-language encyclopedia, a Chinese version, “Yongle Dadian,” or “Yongle Encyclopedia,” was already in existence. (Photo: Shine.com)

More than 300 years before the publication of “Encyclopedia Britannica,” the oldest English-language encyclopedia, a Chinese version, “Yongle Dadian,” or “Yongle Encyclopedia,” was already in existence.

The encyclopedia includes over 8,000 texts spanning from the pre-Qin Period (2100-221 BC) to the early Ming Dynasty. It features various subjects, including philosophy, literature, history, geography, religion, medicine, agriculture, art, astronomy and science.

Similar to today’s Chinese dictionaries, which can be searched by pinyin, the arrangement of the encyclopedia is based on “Hongwu Zhengyun,” or “Correct Rhymes from the Hongwu reign in the Ming Dynasty.” It is a dictionary with characters arranged phonetically according to a rhyme system.

Emperor Yongle, the third emperor of the Ming Dynasty, who achieved great success on the battlefields, created many cultural traditions.

Respecting classical culture, the emperor ordered scholar-official Xie Jin to write a compilation of every subject and every known book of Chinese in the first year of his reign in 1403. One year later Xie completed a first version of the encyclopedia, which was called “A Complete Work of Literature,” along with a team of over 100 scholars mainly from the Imperial Academy. However, Emperor Yongle was not satisfied and thought the content was insufficient.

It took scholars another year to handwrite the final version, and the “Yongle Encyclopedia” was completed in 1408.

In 1421, Emperor Yongle relocated the capital city from Nanjing to Beijing. The encyclopedia was brought to the new capital and was placed in the Wenyuan Library, which was exclusive to the emperor, in the Forbidden City.

Emperor Jiajing (1507-67), the 11th emperor of the Ming Dynasty, cherished the encyclopedia during his reign. He was a devoted follower of Taoism, who wanted to find a path to immortality and an “elixir of life,” so he read related chapters of the encyclopedia carefully.

In 1557, a fire broke out in the Forbidden City. Emperor Jiajing ordered that the encyclopedia must be saved from the fire at all cost. Luckily, it was preserved intact but the three halls were razed to the ground.

Emperor Jiajing decided to transcribe the encyclopedia because he feared further fires could destroy the original work. Completed in 1563, the transcription took six years. Both the format and binding followed the original version. The encyclopedia was written in a regular script and decorated with many exquisite illustrations, while each volume was protected by a hard-cover, which was further wrapped with yellow silk.

The whereabouts of the original “Yongle Encyclopedia” remains a mystery, possibly destroyed in a late Ming Dynasty war and the copy also suffered a miserable fate.

In order to compile the “Siku Quanshu,” or “Complete Works of Chinese Classics,” during the reign of Emperor Qianlong (1711-99), the editors used “Yongle Encyclopedia” for reference. They were surprised to find that over 2,400 rolls of the encyclopedia were lost in more than 1,000 volumes. Some of the missing rolls were stolen and sold by eunuchs while others were borrowed by officials and not returned.

The 1860 invasion of Anglo-French allied forces brought the greatest calamity to the encyclopedia. A large number of volumes were stolen and carried to Britain. Of more than 10,000 volumes, only around 800 volumes were left as of 1894.

After the invasion of the Eight-Nation Alliance in 1900, only 60 volumes were left in Beijing.

After the founding of the People’s Republic of China, the government retrieved some volumes that were lost overseas and owned by private collectors, and 221 volumes of the “Yongle Encyclopedia” are safely stored in the National Library of China in Beijing.

In 1983, a member of the National Library of China staff received a letter, which said that a farmer family from Yexian County in Shandong Province had a volume of the “Yongle Encyclopedia.” The library quickly sent experts to research the claim.

The discovered national treasure was in the keeping of a woman, whose family was surnamed Qiu. The volume had been in the Qiu family for several decades and was handed down to her through the generations as a dowry.

Ignorant of its value, the family members used the large and heavy book to flatten paper cuttings. They even tore out some of the pages to make notebooks and cigarette paper. Fortunately, most texts of the encyclopedia wasn’t badly damaged and the treasure is now securely stored in the Nation Library of China.