What is the most enchanting music in the world? For 15-year-old Gulzeper Muhtar in Northwest China's Xinjiang Uygur autonomous region, it is the sound of konghou, an ancient plucked string instrument. 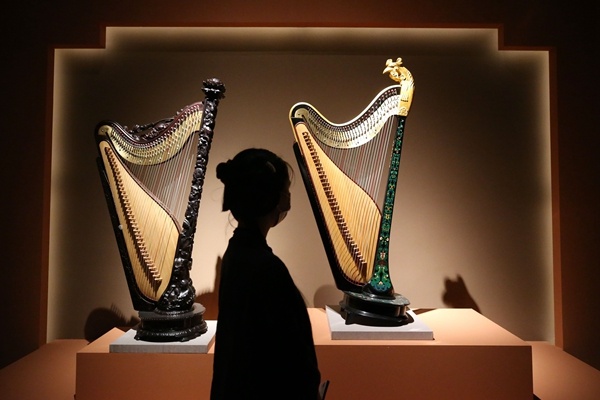 A visitor looks at konghou exhibits on display at the National Museum of China in August.[Photo provided to China Daily]

Konghou, which is shaped like a harp, is said to have been introduced into the Chinese hinterland via Xinjiang during the prime period of the ancient Silk Road. It was all the rage in the Tang Dynasty (618-907) over 1,100 years ago, with many poems and murals depicting the unique instrument.

"The sound is so heavenly that I feel like a fairy when playing the konghou," says the junior high school student in south Xinjiang's Qiemo county, which is known as the home of the instrument. It is where one of the oldest konghou relics in China was discovered.

It was love at first sight. Gulzeper Muhtar was impressed by the konghou when she first saw it being played in 2015. The county had invited a renowned Beijing-based player to promote the traditional Chinese instrument that can produce both Chinese and Western music.

She then started to learn to play the konghou to "live up to being a Qiemo local".

Located on the southern rim of China's largest desert, Qiemo was a stop along the ancient Silk Road. It used to be a poor county with limited means of boosting economic activity. As China's anti-poverty campaign swept the country, more parents could afford to buy their children the konghou, which is priced at about 30,000 yuan ($4,488). 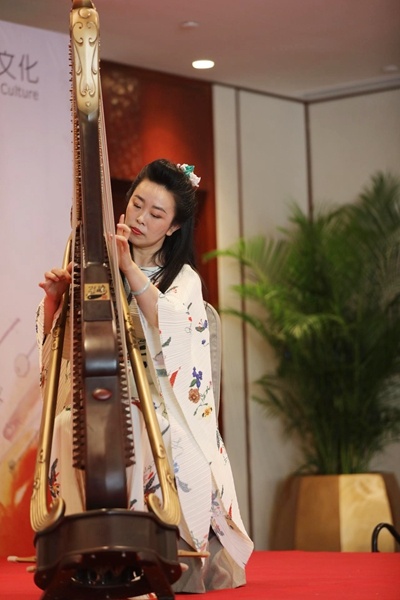 Wu Lin, a musician with the China National Traditional Orchestra, plucks a konghou at a forum on traditional music in Langfang, Hebei province, in October.[Photo provided to China Daily]

The distance between Xinjiang and major domestic conservatories did not stop them from honing their skills, as many teachers took to online courses, says Liang Pu, head of the county's konghou teachers' team.

As Qiemo's konghou players grow in numbers, they ventured out of classrooms to perform for locals and even play outside Xinjiang. Gulzeper Muhtar and her konghou teammates played a popular TV series theme song at a hit variety show in East China's Zhejiang province in 2018 and won a national art performance prize in 2019.

Gulzeper Muhtar's parents did not quite back her devotion to the konghou over worries that it might steal her study time. "I signed a contract with them, promising to quit playing the konghou if my academic performance worsened," she says, laughing.

She managed to strike a perfect balance between practicing konghou and studying, earning her parents' support. They bought her a konghou after seeing what it had earned their daughter: the first flight, the first trip to Beijing, a widened horizon and the dream to become a konghou cultural ambassador.

Gulzeper Muhtar plans to major in konghou in a conservatory after graduating from high school. "I feel a bond with konghou, and I want it to be heard by more people at home and overseas."