Manzhao is a small village surrounded by tropical rainforest, widely known as the “Dai paper” mill in the Dai Autonomous Prefecture of Xishuangbanna, Yunnan Province. The new Dai houses and the traditional wooden houses coexist symbiotically.

There are nets for drying paper all over the village and inside villagers' houses. From time to time, you will see Dai women wearing veils rushing through the village.

"We've been making Dai paper in the village of Manzhao for over 800 years," said Yan Kan, an inheritor of the papermaking craft. From the age of five, this Dai ethnic resident was already obsessed with Dai paper and had seen many of his family using iron pots to make Dai paper with the bark of the paper mulberry. When he was 16 years old, he was taught by his grandparents to be a papermaker and was quickly able to complete the production process independently.

The day of the interview coincided with the Gate-closing Festival of Dai. To celebrate the festival, the local Dai people were all busy preparing food, and monks were walking to Buddhist temples in the mountains to study scriptures.

According to Yan Kan, the origin of the paper is related to the prevalence of Buddhism in the area.

In the Southern Song Dynasty (1127–1279), after the Central Plain's paper-making technique was introduced into the village of Manzhao, the Buddhist Dai king asked the villagers to study and produce the paper for writing the Buddhist scriptures. Due to its breathability, abrasive resistance and impressive storage life, Dai paper gradually replaced the Indian palm-leaf manuscripts and became the carrier of Dai people's beliefs and cultural heritage.

Following Yan Kan through the village of Manzhao, we came across a lush rainforest that covered the whole mountain. Yan Kan told us that "The production of Dai paper starts from here. Unlike ordinary papermaking that requires the felling of trees, Dai paper is environmentally friendly because its raw material is the recyclable bark of these trees."

Dai paper still uses an 800-year-old production process of “soaking, cooking, mashing, pouring and drying paper” which has been used since the early stages of the paper invention in China. In the papermaking workshop in a Dai wooden house, Yan Kan demonstrates 11 different papermaking processes to us.

“When I was a child, I felt that papermaking was something to be happy about. After I became an adult, it naturally became my job,” said Yan Kan, as he hit pulp with a mallet. 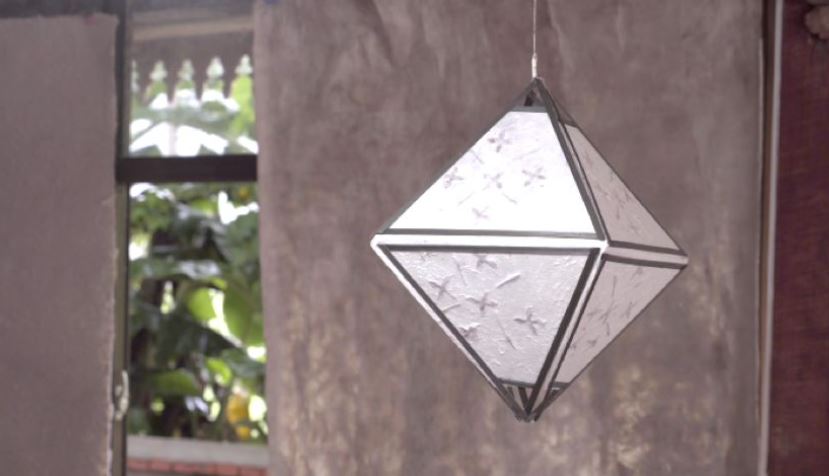 A lampshade made from Dai Paper. (Photo: CGTN)

Although Dai paper carries the culture and beliefs of the Dai people, in the midst of the reform and opening up, due to the influx of mechanical paper entering the market, the crafting of Dai paper faced problems. To counteract this, Yan Kan improved Dai's papermaking technology, saving on production time and reducing labor costs, and then he started teaching his new papermaking process to the villagers for free.

"I don't want the ancient knowledge to be lost in our generation." Yan Kan said. In 2009, together with the Manzhao villagers, the devoted Yan Kan established Dai's Traditional Papermaking Cooperative and was elected by the villagers as the chairman of the Cooperative. In order to expand the Dai paper business, Yan Kan advocated that the paper needs to go and be seen abroad.

Due to the continuous development in papermaking technology, Dai paper is now widely used. People use it for Buddhist scriptures, tea wrapping, paper umbrellas, lanterns, hats, lampshades, and even temporary rooftops. Starting from a small village in Xishuangbanna, Dai paper has now traveled to the United States, Thailand, Japan, South Korea and other parts of the world.