A rare ancient manuscript recording the construction of Yuanmingyuan, or the Old Summer Palace, in Beijing was returned on Thursday to the formal imperial resort of the Qing Dynasty (1644-1911). 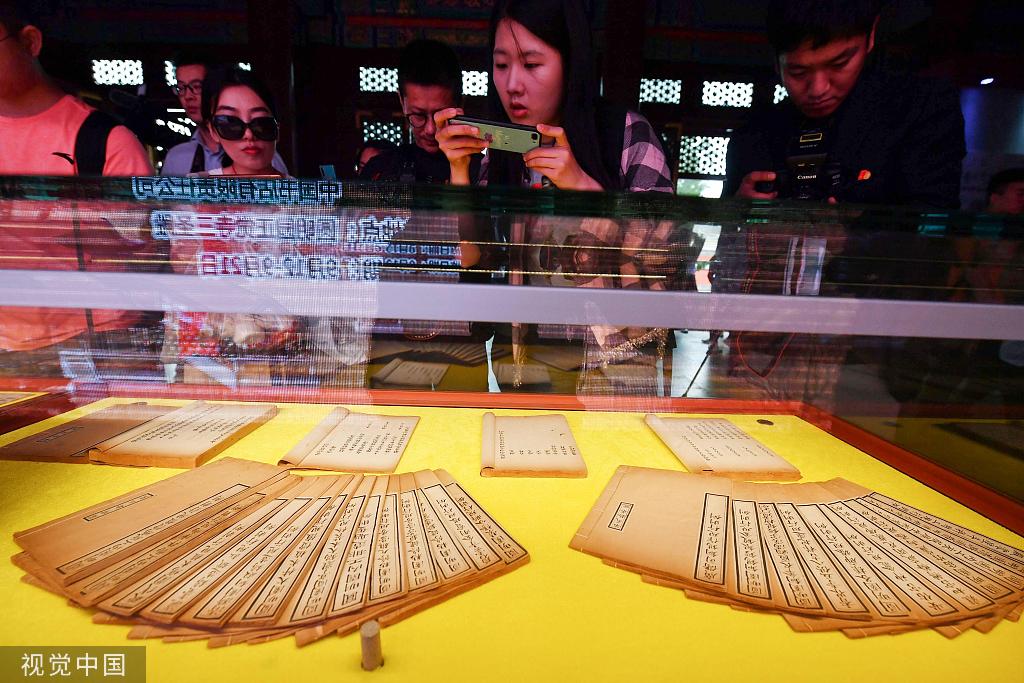 Visitors look at a rare ancient manuscript recording the construction of the Old Summer Palace, the imperial resort of the Qing Dynasty (1644-1911). The manuscript, believed to be more than 200 years old, is on display in the palace's Zhengjue Temple in Beijing. (Photo: VCG)

It was found in Cathay Bookshop, a Beijing-based bookstore mainly dealing in antique books. Experts consider it a milestone in the study of Yuanmingyuan architecture.

Covering approximately 350 hectares, Yuanmingyuan was first built in 1707. It was commonly considered the pinnacle of ancient Chinese gardens.

However, a fire set by invading Anglo-French forces in 1860 caused the architectural splendor to be swallowed by an inferno. The site was hit again by the Eight-Nation Alliance as well as bandits around 1900, finally turning it into ruins.

"It's a national pain, as the site was plundered many times," said Li Xiangyang, deputy director of the administration of Yuanmingyuan Ruins Park. "All precious ancient documents were lost. Not even a single account book could be found."

According to Li, Rules for Craftsmanship in Yuanmingyuan, of which there are 48 copies, is the first of the lost ancient books to come home since the invasion in 1860. In August, Cathay Bookshop and the ruins park administration co-organized an appraisal to make sure it is an original. The copies were created from the reign of Emperor Qianlong (1736-95) to Emperor Daoguang (1821-50) during the Qing Dynasty.

The book records construction materials, expenditure and craftsmanship in detail, covering almost all branches of work in ancient Chinese architecture, according to Zhang Kegui, a researcher at the Palace Museum in Beijing.

"We had never seen such complete construction guide rules on Yuanmingyuan," Zhang said. "It's exciting to see one part is about Xiyang Lou (Western Mansion). We didn't know how it was built."

Xiyang Lou, a group of Europeanstyle imperial buildings built in the mid-18th century, is among the few ruins that still stand above ground in Yuanmingyuan and has come to symbolize the site. Scholars only have old pictures and paintings as references to ascertain an idea of what the buildings looked like.

Zhang said the reason the rules were handwritten, rather than printed, was that they were used as examples for the highest-level construction and could not be released to the public.

"In restoration of ancient architecture, we found that many old construction techniques have disappeared," he said. "Thanks to the book, we know the formulas again."

Since many files about Yuanmingyuan's architecture have been gathered in recent years, Li revealed that historical scenes before 1860 at several spots in Yuanmingyuan will be recreated.

"The vicissitudes of history need to be kept, but the ancient glory also needs to be better displayed to strengthen people's cultural confidence," Li said. "Rediscovery of the guiding rules will offer crucial and reliable references for the upcoming project."

The 48 copies are to be displayed in Yuanmingyuan until Sept 21.