Engraved creature motifs, sun totems and octangle stars found on 7-millennium-old white pottery in Hunan Province have also appeared on the artefact unearthed in Zhejiang Province. The discoveries have offered a fascinating insight into ancient culture.

The pottery items, discovered at Dongting Lake Plain and on the upper reaches of the Xianghu and Yuanhu rivers within the Hunan Province, are on display at the Kuahuqiao Site Museum. (Photo: Shine.cn)

It has left people wondering whether the pottery designs were just a coincidence or if there was any ancient cultural exchanges between the two provinces. The two places are thousands of kilometers apart and it would have been almost impossible for ancient folk back then to communicate with each other in such a primitive society. Furthermore, what do the engravings mean and stand for?

Lovers of pottery and archeology can find these answers and more at an exhibition at the Kuahuqiao Site Museum through December 28.

The items were discovered at Dongting Lake Plain and on the upper reaches of the Xianghu and Yuanhu rivers within Hunan Province. The present-day excavation covers a 600-square-kilometer area, but the pottery itself has spread to Shaanxi, Guangdong and Zhejiang provinces, traveling throughout almost half of China’s territory.

Archaeologists believe the pottery was found along four human migration routes. The northward route reached Shaanxi Province via Hanhe River. Another route was to the east along the Yangtze River and finally arrived at Taihu Lake near the boundary of Jiangsu and Zhejiang provinces.

The last two routes all went to the Pearl River Delta in Guangdong Province, but with different paths. One passed through Guizhou Province and the Guangxi Zhuang Autonomous Region, while the other one traveled through the southern Hunan Province.

In the 1980s some pieces were unearthed from Tongxiang County in northern Zhejiang. The Kuahuqiao Site in Hangzhou was also found the same-style ceramics. Archaeologists started to look for the similarities between these items.

They believed the white pottery discovered was used as ritual vessels. Ancestors engraved them with motifs and totems to spread their concepts and ideas, and made them white to accentuate their importance and particularity.

Geometric patterns and pictograms were common. Lines and dots were orderly carved and took on distinct layers. Historians believe they were not ornaments, but conveyed ancient people’s mental awareness for nature. 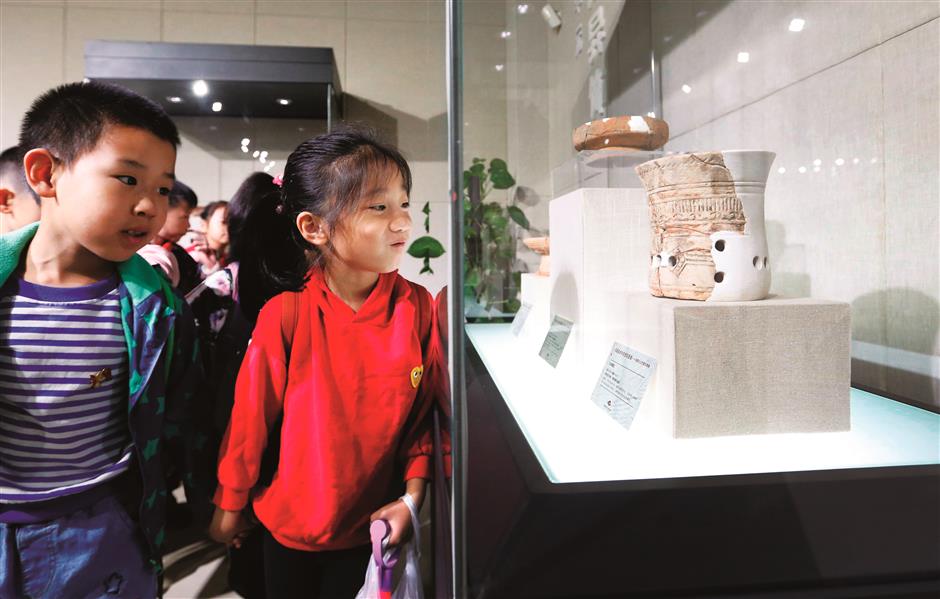 A group of kids take a close look at the potteries on display at the Kuahuqiao Site Museum. (Photo: IC)

Those dug from the northern zone, with better agricultural conditions, were often ornamented with sun and star patterns, reflecting that people already had acquired original astronomical and climate knowledge.

Ancestors observed the path of the sun and believed everything lived on it. Thus, worshipping rituals came into being. Such cognition was the foundation of primitive society and supported its development.

Meanwhile, versions from the southern zone, with a harsh natural environment, were usually sculptured with animal motifs, since ancient people were in awe by nature and believed every creature had a soul.

Compared with other crockery from the same period, the white pottery featured finer skills, better-designed patterns and uncommon ornamenting techniques. Therefore, they are believed as the first etiquette vessels in Chinese civilization.

There were three artistic peaks in Chinese prehistorical civilization. The first phase is epitomized by white pottery, while the second is typified by the Miaodigou culture’s colorful ceramics dating 6 millennia ago in today’s Shaanxi, Shanxi and Henan provinces. The latest phase is the Liangzhu jade culture from about 5,000 years ago in Hangzhou. 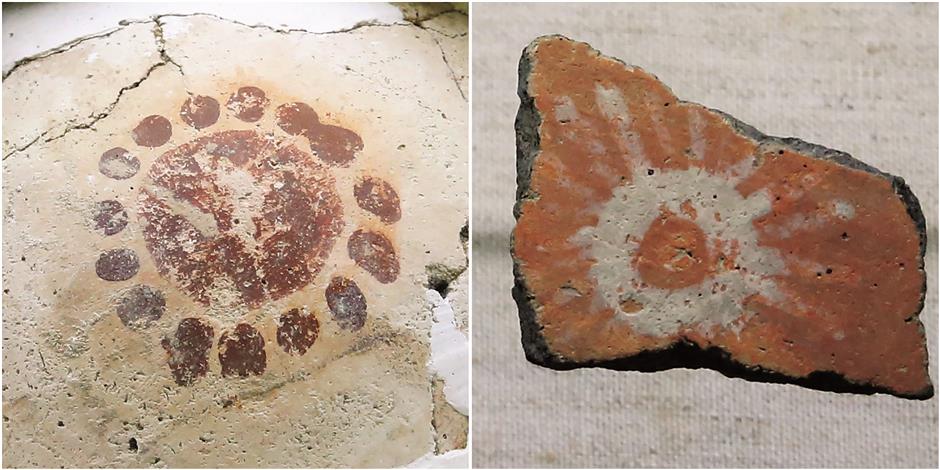 Ancestors engrave pottery with motifs and totems such as geometric patterns and pictograms to spread their concepts and ideas. (Photo: Shine.cn)

During the late Neolithic Age, the two varieties began to fuse. Creatures evolved into mythical dragons and phoenix, and sun, moon and cloud developed into the original conception of yin and yang. Historians considered the basis of Chinese philosophy could be tracked down to this pottery.