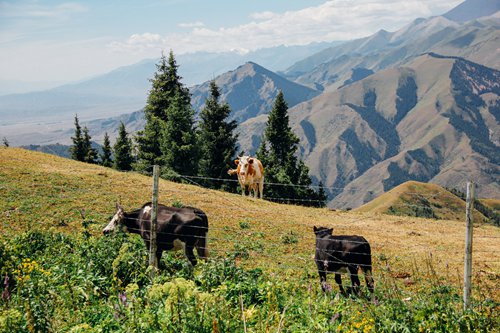 Silver grasslands and a holy lake, high-end camping and rare salamders from the dinosaur age  — those are the things you can witness in Xinjiang's smallest prefecture.

In Bortala, people can experience all of Xinjiang's openness and peace in a nutshell.

Bortala, meaning "silver grassland" in Mongolian, is at the west part of Junggar Basin and shares a 372-kilometer border with Kazakhstan to the north.

The region used to be a main communication center on the Silk Road in ancient times, and is a significant hub on the current Belt and Road.

Founded in 1954, the region has rich natural resources on its 27,200 square kilometers of land.

Sayram Lake, a 40-minute drive from Bole, the capital city in Bortala, is dubbed "the last tear of the Atlantic Ocean," as the warm and wet air from the west end of the continent stops here.The lake, embraced by grass in mountains at a 2,073-meter altitude, displays different shades of blue when people watch it from different positions, at different times or under different weather conditions.

As early as 3,800 years ago, there was human activity around the lake. It is considered a holy lake by ancient residents.

Now the lake, as a landmark of Bortala, is visited by more than a million tourists every year. The annual bicycle competition around Sayram can always attract participants and audience members from China and overseas.

Another iconic lake in Bortala, the Ebinur Lake in Jinghe county, is Xinjiang's biggest saltwater lake and is home to around 1 million birds.

Jinghe not only owns the treasure of water, it also has the Mutetar Desert, the largest shifting desert in Junggar, with magnificent scenery.The entirety of small Wenquan county is a scenic spot itself as well.

Wenquan, meaning hot spring in Chinese, has been developing an ecological and relaxing type of tourism, using its geothermal resources and natural scenery.

It is also the home to Xingjiang salamanders, a species from the dinosaur age that only lives in a small area with an absolutely clean environment across the China-Kazakhstan border.

Moreover, the Kruger Camps, a camp with 15 wooden villas built in the mountain forests of Wenquan and newly opened in late May, has welcomed guests from around the world, including the US, who were all impressed by the stunning scenery.The most mysterious but attractive spot in Bortala is the Xiaerxili Natural Reserve near the border between China and Kazakhstan.

It used to be a disputed region, but in 1998 both countries agreed it belonged to China. Nowadays it is an unpopulated area and people can enter to view "the last virgin land" with permission.

On the Sailboat Square in the city center, people gather to enjoy square dancing, like any other cities in China.

But it's different in Bole, because people dance to a Xinjiang-style of music — Uyghur, Kazakh and Mongolian folk songs.

"A Kazakh uncle is our teacher," Xu Jinzhi, a retired teacher in Bole, told the Global Times. Xu and several of her friends were in colorful Uyghur traditional dresses.

Hajile, an 11-year-old Uyghur girl, was a little star in the crowd. She told the Global Times she only started dancing several months ago.Across the street was a noisy night market. More than 100 tables were surrounded by local residents and tourists. People speaking in different Chinese dialects enjoyed BBQ, seafood, milk tea and kawas, a popular local drink made from honey and hops.

Since thousands of years ago, camel teams carrying silk, jade or melons have been passing through this place.

Eastern and Western cultures have long been communicating and blending in Bortala.

In 1771, the Mongolian clan Torghut decided to move back to China from the Volga region of Russia, and was warmly welcomed by Emperor Kangxi.

The clan was settled in an area in west Xinjiang that included Bortala.

In the 1760s, another clan, the Chahar, also settled down in Jinghe, Bortala under Emperor Qianlong's orders to protect the border.

In recent decades, people from different parts of China moved to Bortala to help construct the region.

Nowadays, Bortala has a population of 500,000, consisting of 35 ethnic groups, including Mongolian, Han, Hui, Uyghur and Kazakh.

All the different groups living together creates a diverse and harmonious atmosphere in Bortala.

On the morning of August 2, the railway station of Bortala's Alashankou city, a trade hub that borders Kazakhstan, became very crowded. A train carrying 730 tourists from Central China's Hubei Province arrived here after a five-day journey across China.

"Through the tour Hubei and Xinjiang could have a closer connection," Hu Changrong, 68, a tourist on the train, told the Global Times.

In the following two weeks, the tourists would visit the main scenic spots through railways in Bortala as well as in Turpan, Kanas Lake and Heaven Lake on the Celestial Mountains.

Apart from traveling by train, well-built highways have now connected the scenic spots in Xinjiang.

In Bortala, nowadays visitors can even take light aircraft to reach Saryam Lake and Kruger Camp directly from Bole airport.

Moreover, the development of tourism could not be achieved without security.

"In Xinjiang, police officers are demanded to arrive at the scene within one minute after receiving the alarm call," Xu Hu, deputy chief from the prevention and control team of Bole Public Security Bureau, told the Global Times.

Xu said that the police have been using advanced technologies for security, such as facial recognition systems, a smart system that can spot abnormal images on surveillance video, as well as one-click buttons at key locations to report an incident to the police.

Added efforts in security have sharply dropped the crime rate in Bole in the past years, said Xu.