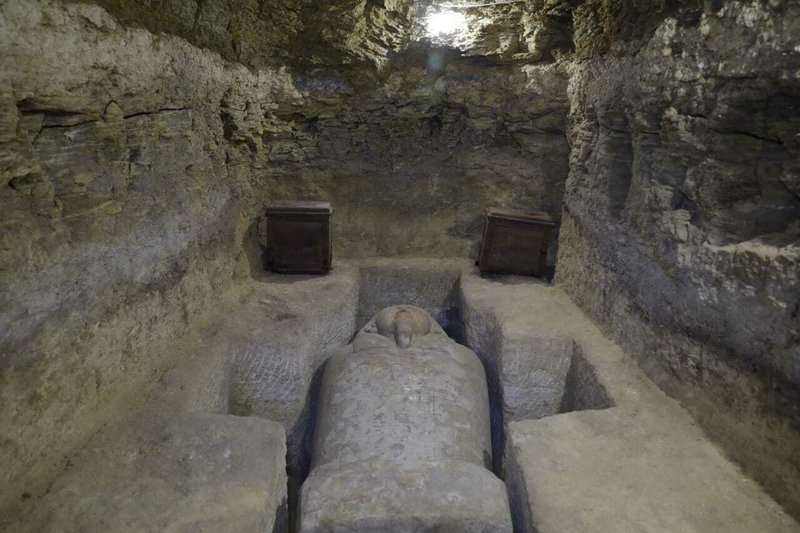 MINYA, Egypt, Jan. 30 (Xinhua) -- The Egyptian Ministry of Tourism and Antiquities announced on Thursday the discovery of 16 ancient tombs with about 20 sarcophagi and thousands of funerary objects at a necropolis in Upper Egypt's Province of Minya.

Egyptian Tourism and Antiquities Minister Khaled al-Anany said the discovery was made during a recent Egyptian excavation mission at al-Ghuraifa area near Tuna el-Gebel necropolis of Minya.

"Today, we announce the discovery of 16 more burial shafts, belonging to the high priest of ancient god Thoth, with a big number of stone sarcophagi and wooden coffins, and eight sets of Canopic jars as you can see here in the showcases, and thousands of amulets and ushabti statuettes," the Egyptian minister told a press conference held in the desert near three of the uncovered tombs.

The tombs and unearthed objects belonged to the Late Period starting from the Twenty-Sixth Dynasty that ruled ancient Egypt some 2,600 years ago.

The archaeological mission of Egypt's Supreme Council of Antiquities (SCA), led by its secretary general Mostafa Waziri, started excavation at al-Ghuraifa in November 2017, when it announced the discovery of several tombs with hundreds of statues.

"In this third season, we discovered more than 10,000 ushabti statuettes that symbolized servants, over 700 amulets, some of which are made of pure gold and precious stones, in addition to eight sets of Canopic jars, some of which still contain well-preserved intestines," Waziri told Xinhua at the site.

"In total, throughout the three excavation seasons for our mission, we discovered 35 tombs with 90 sarcophagi and tens of thousands of objects dating back to the Late Period," the SCA chief added.

The discovered artifacts include five anthropoid sarcophagi made of limestone and engraved with hieroglyphic texts, and five wooden coffins in good conditions, with some of them showing the names and titles of their owners.

One of the uncovered tombs, with a seven-meter deep shaft, belonged to Djed-Djehuty-iuef-ankh who served as the royal seal bearer of Lower Egypt.

"This is his anthropoid sarcophagus with his title written on it in hieroglyphic. He was like a minister of finance during the Late Period," Mohamed Wahballah, an archeologist and member of the SCA excavation mission, told Xinhua inside the tomb.