CULTURE Anesthesiologists – doctors who are closest to coronavirus patients

Anesthesiologists – doctors who are closest to coronavirus patients 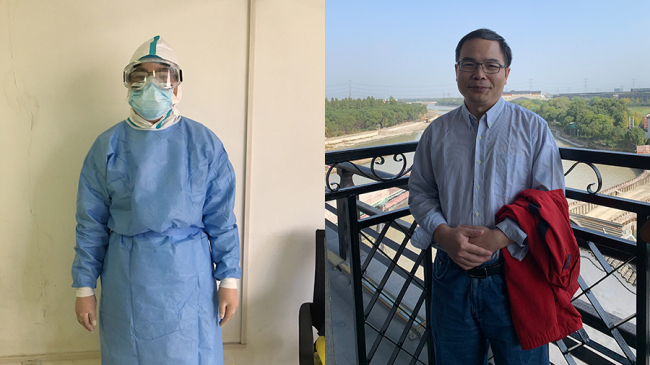 Chen Zhijun, Director of the Anesthesiology Department of Wuhan No.1 Hospital. (Photo: China Plus)

Endotracheal intubation is important for the treatment of critically ill COVID-19 patients, but it's also highly risky for the doctors who perform it.

The procedure involves inserting a tube through the patient's mouth down into the trachea to create a new air passage for breathing.

During the process, doctors are within 20 centimeters, or about seven inches, from the face of the patient. This close proximity increases a person's risk of contracting the virus.

Seventeen anesthesiologists at Wuhan No.1 Hospital have decided to take this risk.

This special team was created early in February and the doctors have been on duty 24 hours a day ever since.

They are on constant standby in the hospital and rush to perform the endotracheal intubation in the ICU as soon as they receive the emergency call.

"Intubation is like lesson 101 for us anesthesiologists but performing it on coronavirus patients is another thing," said Dr. Chen Zhijun, Director of the Anesthesiology Department of the hospital, and also the leader of this special team.

COVID-19 is passed mainly through respiratory droplets during close contacts, while the latest diagnosis and treatment guideline have confirmed that aerosol transmission is another way of infection.

This is likely to happen when people are exposed to high concentrations of contaminated aerosol in a relatively closed environment for a long time.

Dr. Chen Zhijun said when he first sent out the message in their WeChat group asking for doctors to join in, many anesthesiologists responded.

Among them was 34-year-old Wang Yunfei. He said the decision was not hard to make because he thought it was his responsibility as an anesthesiologist.

"I just think we should do what we are best at doing. On average, we do endotracheal intubations about 500 times a year. It's routine work for us," he said.

Over 20 intubations have been performed since the team was set up, including nine performed by Lu Fan.

The doctor said from the time they receive a call for help to arriving at the ward and doing the job, the whole process should be within 30 minutes.

"Basically, after we receive the emergency call from the ICU, it takes us two minutes to prepare the narcotic and trachea cannula. After that, it takes 20 minutes to put on all the protective gear. Then we go upstairs, and that takes three minutes," she explained.

But working at the ICU means racing against time. Doctor Lu said she once received an emergency call telling her a patient was in extremely critical condition and needed the intubation as soon as possible, she managed to get to the ward within ten minutes.

Lu said there might have been worries at first about the risk, but she felt relieved and more confident after more protective gear had arrived at the hospital.

So far, there are over 6,000 coronavirus patients exhibiting serious symptoms or in critical conditions in hospitals in Wuhan.

The hardest-hit city now has 10 hospitals designated for treating patients in severe and critical conditions, with a total of 7,286 beds and 245 beds in negative pressure ICUs.