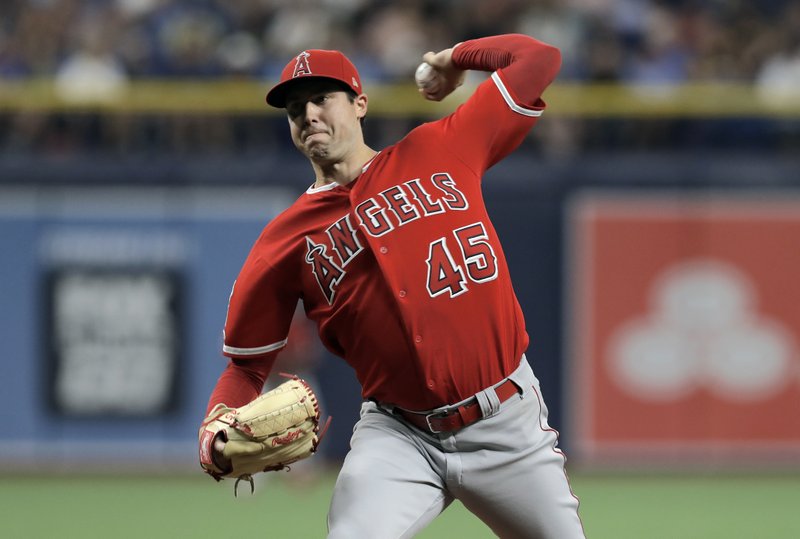 In this June 13, 2019 file photo Los Angeles Angels' Tyler Skaggs pitches to the Tampa Bay Rays during the first inning of a baseball game in St. Petersburg, Fla. (Photo: AP)

Tyler Skaggs grew up rooting for the Los Angeles Angels, and got to pitch for his favorite team.

The left-hander’s next start for the Angels was supposed to be on the Fourth of July holiday, during a weeklong trip to Texas that began with Skaggs and his teammates proudly posing in cowboy hats and Western attire by their plane.

Skaggs died Monday, when the 27-year-old pitcher was found unresponsive in his Texas hotel room. The scheduled series opener against the Rangers was postponed.

“Words cannot express the deep sadness we feel right now. Our thoughts and prayers are with (wife) Carli and their families. Remembering him as a great teammate, friend, and person who will forever remain in our hearts... we love you, 45,” All-Star center fielder Mike Trout wrote on Twitter.

Angels general manager Billy Eppler described himself as being “in utter shock and disbelief.”

The team, in a statement, called Skaggs “an important part of the Angels Family” and said its thoughts and prayers were with his wife and entire family “during this devastating time.”

Police in Southlake, Texas, said they were investigating but no foul play was suspected. Skaggs was pronounced dead at the scene after police responded to a call at the hotel Monday afternoon.

Eppler, manager Brad Ausmus and team president John Carpino planned to address the media Tuesday afternoon, before the Angels and Rangers were scheduled to play. Texas said there will be a moment of silence for Skaggs prior to the first pitch.

“We will support the Angels’ organization through this most difficult period, and we will make a variety of resources available to Tyler’s teammates and other members of the baseball family,” Manfred said in a statement.

With the team out of town, dozens of fans went to Angel Stadium and gathered out front in the hours after Skaggs’ death was announced. They left flowers, hats, baseballs, signs, photos and other memorabilia in a makeshift memorial mound.

Sadly, the poignant display strongly resembled the fan-created memorial for Nick Adenhart in 2009 after the rookie pitcher was killed by a drunk driver. That tribute stayed out front of the Big A through the summer.

Near the entrance of the team’s hotel in Texas, a fan with an Angels jersey sat on a rock wall with a bouquet of flowers attached to a balloon that read “thank you.”

Skaggs, who got married last December and would have turned 28 on July 13, had been a regular in the Angels’ starting rotation since late 2016, when he returned from Tommy John surgery. He struggled with injuries repeatedly in that time but was 7-7 with a 4.29 ERA in 15 starts this season to help an injury-plagued rotation.

In his cowboy-themed Instagram post on Sunday, Skaggs captioned the team photo with “Howdy y’all.” The Angels go to Houston this weekend after their series against the Rangers.

“Some guys that didn’t even know him were visibly shaken,” Texas manager Chris Woodward said, describing the team meeting when his players were told about Skaggs as “one of those moments where you’re just kind of numb.”

Skaggs was in the same draft class with Trout in 2009, the year the 22-year-old Adenhart was killed. Adenhart was coming off his first start that season, his fourth big league game.

Jose Fernandez, a two-time All-Star pitcher for the Miami Marlins, was killed in a boating crash near Miami Beach, Florida, in September 2016. He was 24.

Darryl Kile, who pitched in the majors for 12 seasons, was on the road with the St. Louis Cardinals when he died in his Chicago hotel room at age 33 in June 2002. Albert Pujols, now a member of the Angels, was Kile’s teammate then.

The Rangers said Monday’s game wouldn’t be made up this week. The Angels return to Texas for another series in mid-August.

Skaggs grew up in Santa Monica, on the west side of the sprawling Los Angeles metroplex, as a fan of the Angels instead of the closer Dodgers. He was drafted 40th overall after he graduated from Santa Monica High School, where his mother, Debbie, was the longtime softball coach.

The Angels traded Skaggs in 2010 to Arizona, where he started his big league career with 13 appearances over two seasons before Los Angeles reacquired him in December 2013. He made a career-high 24 starts last year, but missed time in April this season because of a sprained ankle before coming back strong.

Before he was traded to Arizona, Skaggs roomed in the low minors with Trout when they were on the same team in Cedar Rapids, Iowa, in 2010.

Cleveland Indians pitcher Trevor Bauer, who played with Skaggs in the Diamondbacks organization, tweeted: “We came up together. We won together. We laughed and celebrated together. Today, we all lose and mourn together.”