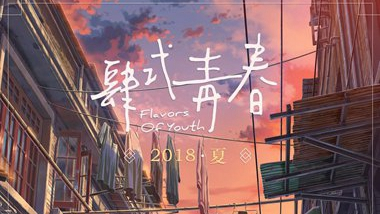 "Flavors of Youth", which features stories set in Chinese cities that were drawn by a crew primarily made up of Japanese animators, is a new highly anticipated Sino-Japanese animated co-production.

Having arrived on Netflix and in Chinese and Japanese theaters on Saturday, the anime film is divided into three chapters, two of which were directed by Chinese directors and the other a Japanese director. The film is a co-production between Chinese animators and Japan's CoMix Wave Films, the studio behind renowned Japanese animator Makoto Shinkai's 2016 hit "Your Name" and his 2007 work "5 Centimeters per Second."

Even though it only made 1.8 million yuan (US dollars 260,000) in the Chinese mainland over the weekend – a fact which can be partly attributed to its low screen share of 0.7 percent – the film has received relatively positive reviews. The film currently has an IMDb rating of 6.7/10, a bit higher than the 5.6/10 on the Chinese media review platform Douban.

"Right now, the domestic box-office performance is not our major concern," one of the film's co-directors, Li Haoling, told the Global Times on Sunday at a Beijing screening event for the film.

As the first Sino-Japanese co-produced animated film to be made in more than a decade, Li noted that the film is an important experiment in seeing how the two sides can cooperate.

"We had to take that first step," Li noted.

Audiences both at home and abroad might see more co-productions such as this hitting the big screens in the near future, not just in animation, but in other forms of media, such as comics, games and live action films as well. This is mainly due to the efforts of the Japan-China Cultural Industry Exchange Association (JCCIEA), which was established in March in Tokyo by major media companies from both countries, including Japan's NHK and China's Maoyan.

"Flavors of Youth" is the association's first official project.

"Aside from movies and TV productions, we will also focus on the production, import and export, as well as marketing, of a series of cultural products from the two countries including music, games and even tourism," Zhang Jin, CEO of China's Joy Pictures and the Chinese director of JCCIEA, told the Global Times.

But the association's prime focus will still be movies, Zhang emphasized.

For instance, the association is planning to open a cinema in Tokyo that will exclusively screen Chinese-language movies.

"Film is still a very important medium for helping us learn about Chinese history and the country's development, not only in cities but also rural areas," Adachi Masashi, the association's Japanese deputy director, told the Global Times.

"In recent years, more and more Japanese people, especially those living in more suburban areas, have started to take an interest in China's people and its society mainly because of the booming number of Chinese tourists flooding into Japan every year," Masashi noted, saying this has established a good foundation for the entry of Chinese movies into the Japanese market.

"The success of "Legend of the Demon Cat" even helped to propel the signing of a film co-production agreement between the two governments during Chinese Premier Li Keqiang's visit to Japan in May," Masashi said.

Aiming to help expand film cooperation between the two countries, the agreement "provides a more transparent policy framework and gives filmmakers in both countries who are seeking cooperation more confidence," Fukuda Takamoto, cultural counselor from the Japanese Embassy in China, told the Global Times at the Sunday event.

"China held the first Japanese film week when the treaty was signed in 1978, three Japanese movies, including Ken Takakura's "Manhunt", were shown in China and received a warm welcome," Takamoto said.

The two countries' film cooperation after 1978 mainly stayed at the import-export level. However, the past few years have witnessed the release of more Chinese remakes of Japanese works as well as Sino-Japanese co-produced films and ACG (animation, comic and game) works. "The Legend of the Demon Cat" and Sino-Japanese animated TV series "Cheating Craft" are good examples.

"Even though the two countries have co-produced a few film and TV shows before, most of them were produced to commemorate anniversaries involving the two countries. "The Legend of the Demon Cat" and "Flavors of Youth" are the first commercialized Sino-Japanese co-productions, which gives them more historical significance," Takamoto told the Global Times.

Talking about the future cooperation between Chinese and Japanese filmmakers, Li, Zhang and Takamoto agreed that things will surely become more diverse and co-creation will become a major trend.

"We have a lot to explore, not just co-productions, but also adaptations; and just like how South Korean pop culture has become popular in Japan recently, we also wish to see Chinese youth culture become more accepted by the Japanese market in the future," Zhang said.