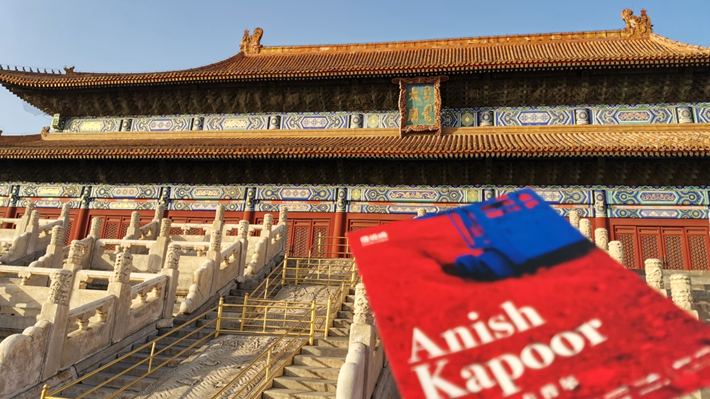 Indian-born British artist Anish Kapoor has brought many of his important pieces to the Imperial Ancestral Temple, opening the second half of his solo exhibition in the Chinese capital.

Taimiao, or the Imperial Ancestral Temple, is said to be the largest ancient palatial structure in the world. Kapoor's stainless steel and pigment sculptures give a nod to the architectural and spiritual history of the site.

Some of Kapoor's mirrored steel works are displayed in the central atrium of the Imperial Ancestral Temple, like the S-Curve and C-Curve.

Visitors are also challenged to view their surroundings – and themselves – in the installation, which tries to turn the world upside down by bending and twisting everything in front of them.  Ancient and contemporary art reflect each other and become part of each other in this exhibit.

In the two galleries flanking the central Temple, Kapoor displays a seminal series of pigment sculptures, emerging from the wall and floor, rendered in intense, alluring colors that deceive the eye through their forms and protrusions.

This is the first solo exhibition Kapoor's held in China. Quite a number of his works are exhibited in another ongoing exhibition in the Central Academy of Fine Arts Museum in Beijing.

The artist invites viewers inside the structure through an inconspicuous door. It opens into a network of glowing red orifices, intravenously connected, and conjures powerful metaphors about the body, existence and spirituality.

The exhibition in the CAFA Art Museum runs through January 1, 2020. And the one at the Art Museum of the Imperial Ancestral Temple will last till the end of this year.