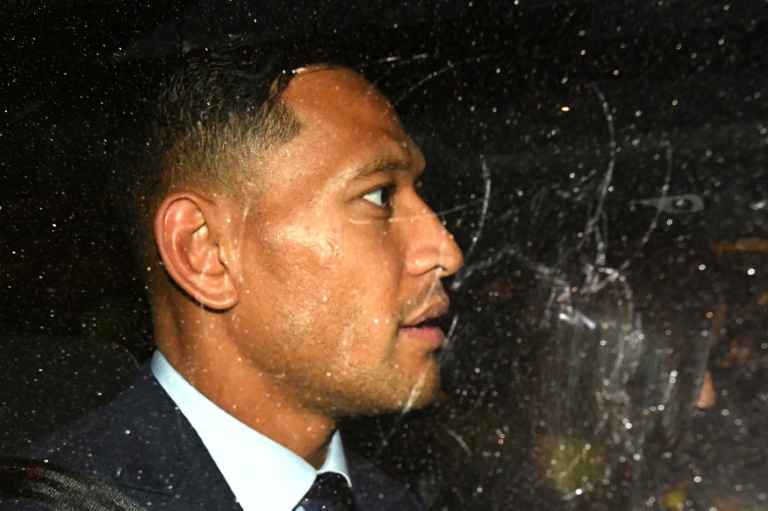 Israel Folau leaves a code of conduct hearing in Sydney in May following his sacking by Rugby Australia over homophobic comments. (Photo: AFP)

Fallen rugby star Israel Folau's social media accounts, which he used to post the homophobic comments that got him sacked, vanished for several hours Monday before being reactived on the eve of a court hearing into his dismissal.

The former Wallaby launched legal action against Rugby Australia and the NSW Waratahs earlier this month, demanding an apology, compensation and the right to play again.

A largely administrative directions hearing is scheduled at the Federal Circuit Court in Melbourne on Tuesday, where lawyers from each side will discuss the next steps in the case.

The devoutly Christian Folau has previously refused to remove the offending online post that "hell awaits" gay people and others he considers sinners.

But on the eve of the hearing both his Instagram and Twitter pages told users "this account doesn't exist" before being mysteriously reactivated some four hours later.

Folau's spokesman said no statement would be issued, and would not elaborate on why they were offline.

Super Rugby's record try-scorer, who was on a Aus$1 million-a-year (US$690,000), four-year contract, was fired by Rugby Australia in May.

Folau opted not to appeal and mediation attempts failed, prompting him to take the highly divisive unfair dismissal case, which has drawn support from conservatives and outrage elsewhere, to the courts.

Folau, who has played 73 times for the Wallabies, raised more than Aus$2 million in just two days through the Australian Christian Lobby to help pay his legal fees before the appeal was paused, with enough money "for now".

It replaced a GoFundMe crowdfunding campaign that was shut down after raising more than Aus$700,000, with the platform saying it would not "tolerate the promotion of discrimination or exclusion".

Folau's claim argues he was unlawfully dismissed under a section of Australia's Fair Work Act that disallows sackings because of a person's religion.

Rugby Australia has insisted the firing was purely contractual, saying he had agreed not to disparage anyone over their sexual orientation following a similar controversy last year.