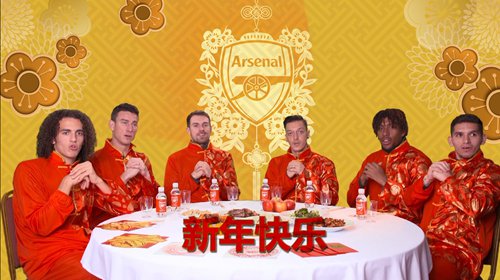 Can you imagine English Premier League stars such as Mesut Özil and Aaron Ramsey celebrating the Chinese New Year in Chinese? Well there is no need to imagine. In a video released on Monday, viewers got a chance to see a different side of Arsenal players as they traded in their soccer kit for bright red traditional Chinese clothing to celebrate the Chinese New Year, or Spring Festival.  In the video, player Laurent Koscielny can be seen reciting Tang Poetry, while the young Gooner Mattéo Guendouzi sets off firecrackers and defensive midfielder Lucas Torreira learns how to put up Spring Festival couplets. Some players can also be seen arguing and laughing as they gather around a mahjong table. Released by Arsenal's official account on Sina Weibo, the minute-and-a-half quickly became a hit, with about 8,000 reposts and 4,000 likes in just a few hours. Reactions from the internet This video has been a huge success among Chinese fans and netizens. Many said they laughed out loud watching Arsenal players celebrating the Spring Festival like local Chinese and were amused by their various accents as they greeted viewers in Chinese. "Mesut Özil zil is a language genius. His pronunciation is brilliant!" Netizen Yitonghu commented. "Hahaha, Unai Emery's Chinese is much better than Aaron Ramsey's," netizen PPPillowtalk posted. Many comments also applauded the "inquisition of the soul" that players underwent as they performed a skit in which they ask a series of embarrassing and tough questions that young people get asked whenever they head home for the holidays, such as "Have you bought a house or car yet?" "Did you get promotion?" and "Did you get that raise?"Netizen Super_van posted with a laughter emoji, "it's an interrogation, not a celebration of the festival!"All in all, the friendly atmosphere on display drew applause from viewers. Netizen Moon Xia Juan posted, "It is funny and warm. I can feel the festive atmosphere."Closeness to the fans and lifeThe first English soccer club to establish an overseas office in China, Arsenal attaches great importance to the Chinese market and Chinese fans.According to the club, Arsenal has held numerous activities for Chinese fans over the past seven years. For instance, the club, together with Chinese Arsenal members, visited schools in impoverished areas such as Longmen County in Guangdong Province and Yugan County in Jiangxi Province to donate sports equipment and stationaries in 2017 as well as earlier this month. In 2018, they also invited some lucky fans in China to watch them play at the Emirates Stadium, which is the club's home stadium. "The preparation for this video actually started in October 2018 and we had to shoot twice," Tony Gu, director of Arsenal's international business development for China & Asia, told the Global Times on Wednesday."The UK headquarter of Arsenal cared a lot about this video, since the Spring Festival is really an important event for us Chinese… our cast in the video is pretty strong, viewers can see the first team players like Mesut Özil and Aaron Ramsey, so I think the club supported us really well," Gu said.According to Gu, Arsenal began producing Chinese New Year videos in 2014. The first video had Nacho Monreal and Aaron Ramsey learn to make dumplings. In 2015, Arsenal players learned and then performed the traditional Chinese Lion Dance. The year after that, Tomás Rosicky and two other Arsenal players showed off their artistic talents by drawing pictures of monkeys as that was that year's Chinese zodiac animal. "We hoped the video this year could be more close to daily life, especially to the lives of young people. You may notice that there are many Chinese internet buzzwords and popular slang terms in our video this year," Gu explained. It seems that this plan has paid off."Oh my God, who taught those players?" netizen kuchinchin posted, obviously quite impressed.Netizen Zuo Lintai was also amused by the image of these foreign players using the latest slang: They are using, 'How old are you? /how always is you?' That's awesome!" In Chinese slang, the English phrase "How old are you?" when translated directly word for word into Chinese becomes "How always is you," or "How is it always you," since in Chinese the word lao, or old, also has the extended meaning of "always." "We had a 10-man team for the video, which was the result of this team's brainstorming. We feel that it might be welcomed by viewers if we present the atmosphere of Spring Festival together with young popular culture," Gu said. "Close to life and welcoming life are Arsenal's values, and they are also our Chinese values," he added.