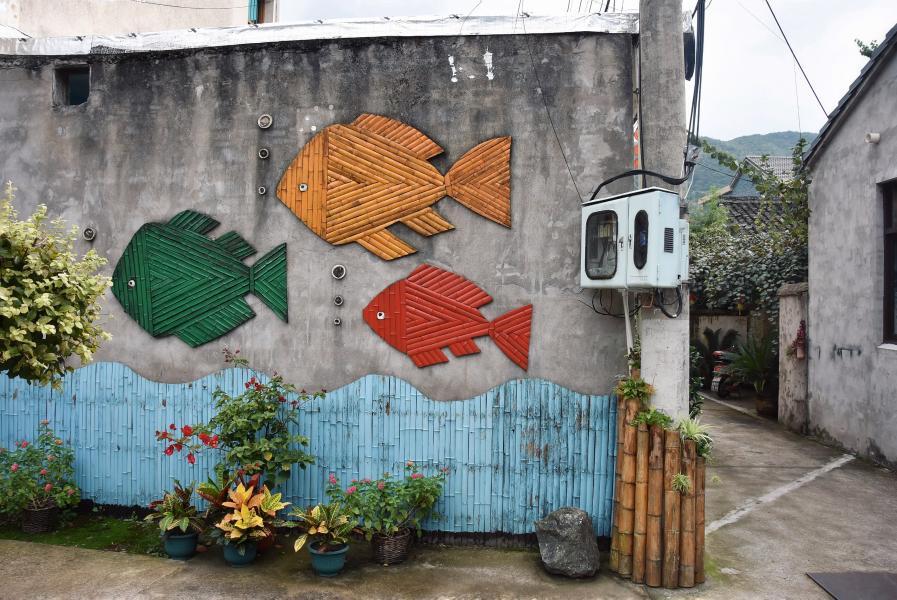 Cong Zhiqiang, an associate professor of the arts at Renmin University of China, was mistaken as a fraud by locals when he first came to Gejia Village in Ninghai County, east China's Zhejiang Province in 2019.

"The villagers thought we were Ponzi schemers when they learned we planned to renovate the village with art," Cong said. The 1,200-year-old village has now become a popular tourist attraction that can receive more than 30,000 tourists each year thanks to the work of Cong's team.

"There was nothing special about our village before Cong came," said Ge Haifeng, Party secretary of Gejia Village. "Our villagers always felt something was missing in their daily lives, although we earned enough money to make a living."

As an experienced "village designer," Cong has visited countless villages across the country and undertaken many rural design projects. Being aware that relying solely on artists is not enough to complete such a renovation project, he persuaded local officials to motivate villagers to join in.

Cong and his team started by collecting ideas from local villagers, and instructed them to redesign their own homes.

Under Cong's guidance, Ge Wanyong, a bricklayer in the village, designed a gardening area with an osmanthus tree in his courtyard. "The more I look at the scenery, the more I love it," Ge Wanyong said. "I never thought I could be a designer because I only followed construction drawings before."

The transformation has also brought some unexpected changes to the village. "Some neighbors who used to quarrel over homestead issues now have stopped arguing and jointly decorated a public space," said Ge Haifeng. "Villagers also started to clean up and even plant flowers in some previously neglected public areas."

The success in Gejia Village attracted many other villages eager to learn from its experience, including Dingwang, a village of the Bouyei ethnic group in Qinglong County, southwest China's Guizhou Province.

Under an east-west pairing-up system for poverty alleviation launched in 1996, Ninghai County has paired up with Qinglong County for 24 years to help it fight against poverty.

"The capital, industry and technical personnel from the east have given us a lot of help over the years," said Luo Yun, Party secretary of Dingwang. "Now we hope to motivate our villagers as Gejia Village did."

In order to help the village, 13 villagers from Gejia Village traveled to Dingwang at their own expense. They devised a renovation plan for the village, helping locals clean up the environment and instructing them to redesign the village based on local conditions and their own experience.

They also taught locals to make cloth dolls with Ninghai characteristics. "I found the Bouyei women are born with skillful hands and master the skills very quickly," said Yuan Xiaoxuan, one of the villagers of Gejia. Yuan also innovated the dolls by adding ethnic patterns.

Helping locals sell their handicrafts, the Gejia villagers taught them to livestream with smartphone applications. "It's unbelievable that our artworks can not only make the village more beautiful but make it rich," said Luo Suimei, a villager of Dingwang. Her first attempt at livestreaming attracted 100,000 views in an hour.

"It's exciting to help increase our villagers' income without leaving the village," she added.

Art is like an engine that triggers people's initiative, and a pleasant community has not only a beautiful environment, but also smiles on everyone's faces, said Artur Rega, a doctor of philosophy from Poland, after visiting Gejia Village.

"The art practice has really changed the residents' attitude toward life. People are more positive about protecting the environment and participate in the villages' construction," said Magdalena Gimbut, another Polish doctor of philosophy who teaches at NingboTech University with Rega. "China has made important contributions to the world in poverty alleviation, and now it is working hard to make more people rich in spirit."