CULTURE Art teachers use music for high note of success

Art teachers use music for high note of success 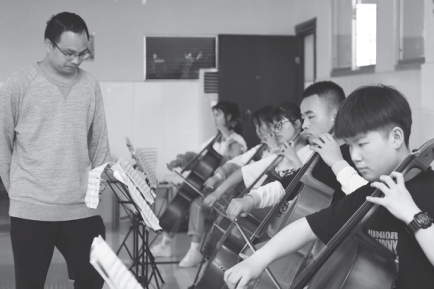 Yan Haiming, a teacher at No 5 Middle School, Luxi county, instructs students on the cello, in Xiangxi Tujia and Miao autonomous prefecture, Hunan province, on May 26. (Photo: Xinhua)

CHANGSHA－Along with the conducting of teacher Yan Haiming, more than 50 middle school students in a mountainous area in Central China's Hunan province picked up their bows and began to play the cello.

"Music offers dreams to children, and what I do is helping them pursue their dreams," Yan says.

Yan works at the No 5 Middle School in Luxi county, Xiangxi Tujia and Miao autonomous prefecture, Hunan, which has a variety of art majors. Many children have learned cello, electric piano, erhu and guitar, which they had only seen on TV before.

Six years ago, Yan came to the school to teach and launched the cello major. Although Yan wondered if the musical instrument could be accepted by rural children, he bought several cellos at his own expense and started the course.

In the first year, Yan only had one student who was willing to learn cello from him, but he did not give up.

"If there is one student, there is hope."

With Yan's devotion, the cello major has attracted more and more students. Soon there were two classes, and students who could not get a seat would practice in the corridor of the school.

During the 2020 Hunan art college entrance examination, which was held at the beginning of the year, Yan's 17 students all achieved excellent results.

"Holding the bow is just like holding the dream of entering the university," says Yang Zuying, an 18-year-old student, who ranked top 40 in the province in the examination. "Cello brings me into the world of music," Yang says.

Every September at the welcome party for freshmen in the school, Dai Fa, an erhu teacher, always attracted the applause and screams of students. The 26-year-old had given up the spotlight and stage before choosing to become a rural teacher.

"I grew up in Luxi county, where I received a relatively backward and monotonous education when I was a child," Dai says.

In Dai's memory, many children failed to pursue their dreams of studying because of poverty. Majoring in music performance, he resolutely chose to become a teacher in his hometown after graduation, hoping to bring about changes to these children's fate.

"When students pick up erhu, there are lights shining in their eyes, and I can see their inner desire," says Dai, adding that although the students did not know anything about the basic knowledge when they first came into contact with erhu, they became more and more skilled as they practiced day by day.

Since the opening of art courses in 2006, the number of art courses in Luxi No 5 Middle School has increased to 13. Every day, the school arranges four art classes, and the students can have enough time to practice after the intense and busy cultural classes. Today, nearly half of first-year senior high school students have chosen art courses.

The school has set up personal studios for 20 professional teachers like Dai and Yan to give full play to their professional expertise. Li Jianjun, the headmaster of the school, says, "our goal is to make young teachers promising and lead children to a better future."

In recent years, the school in this mountainous area has not only helped the local students learn about musical instruments, which they have never seen before, but also trained groups of college students in art education. Some of them have moved to a broader stage, and others have returned to their hometown to teach more children.

"Children in the mountains have a poor foundation in cultural courses and are almost insulated from art courses," says Tan Zihao, director of Luxi county's education and sports bureau. "However, through the development of art teaching, we have not only enriched rural education but also enabled more children to successfully realize their university dreams through art examinations."