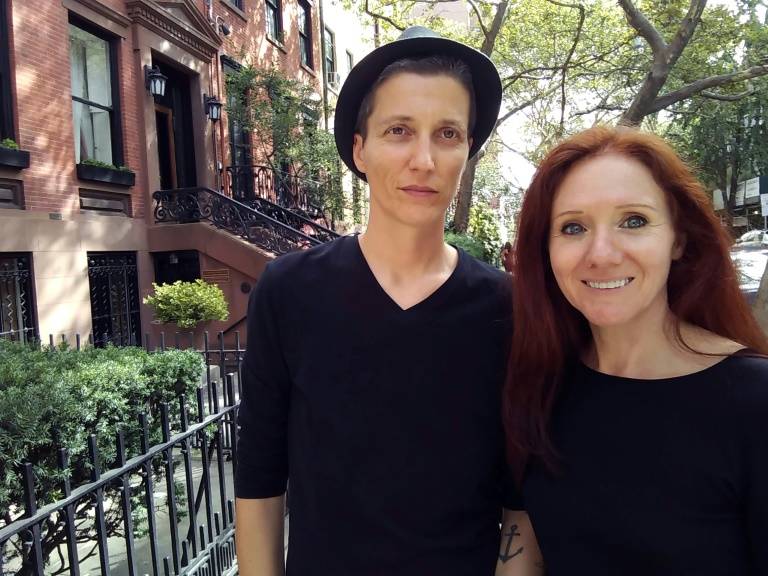 Artists and real-life couple Julian P. Boom (L) and Fleur Pierets (R) are planning on getting married at least 24 times in ceremonies around the world. Photo: AFP

Two women artists, who are a real-life couple, are planning to say "I do" at least 24 times as they marry around the world in a performance artwork to celebrate gay marriage.
After first getting hitched in New York in September, Dutch national Julian P. Boom, 39, and Fleur Pierets, 44 from Belgium, are working their way around the 23 other countries where gay marriage is legal.
Next came Amsterdam where Julian lived for 15 years, quickly followed last week by Antwerp. Now they are heading for Paris where they will be married on November 7 by the head of the city's gender office Helene Bidard.
With plans for a documentary, as well as a photo exhibition and a book about their adventures, the couple have been overwhelmed by support for Project 22.
"We have tried to make it very inclusive. We talked about how we can raise awareness on this subject matter and make it very positive. So instead of complaining about 170 countries where you cannot get married, let's celebrate 24" nations where gay marriage is legal, said Pierets.
Ironically since launching the Project 22, two other countries -- Germany and Malta -- have also legalised same-sex unions.
But that has not fazed the couple, who say they are making a "kind of making a time capsule in which you can see that things can actually change for the better."
"It would be great in two years, to have an exhibition called 22 and have 26 or 27 countries that would be amazing," said Pierets.
The first wedding in New York where the couple were living is the one that will count legally.
And since this is an "art performance" the couple do not have to meet residency requirements and other laws in other places, and have found local officials have gone out of their way to make things happen.
"We really, really wanted to do this project," said Pierets. "So we sold everything, not that we had so much. So now we are travelling with just one suitcase."
With friends offering them places to stay, their funds will last through weddings five or six, with Portugal, Spain, Luxembourg and Britain next on the list. And the whole project will likely take about two years.
Despite the fact that this is "work," Pierets said they had both been surprised by how emotional their symbolic weddings have been.
"In Amsterdam, we had tears in our eyes it was so unexpected," said Pierets. "I think we are both suckers for romance."