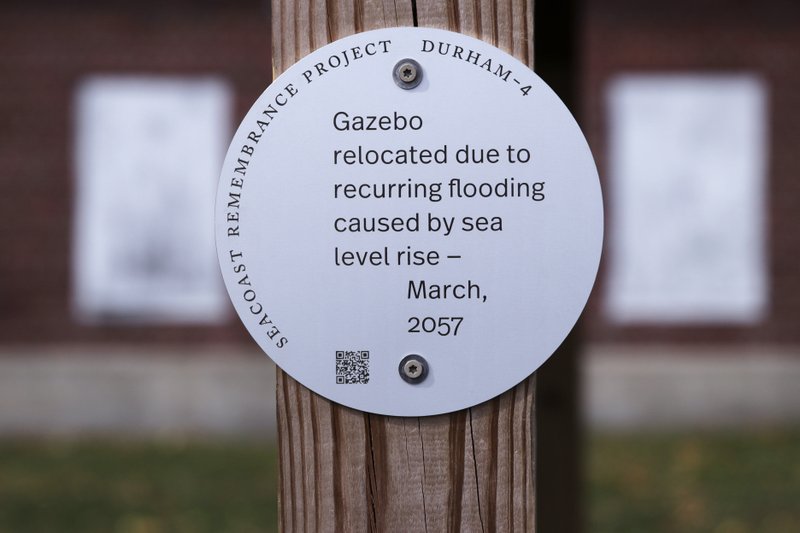 A sign, part of a public design installation by artist Thomas Starr, is displayed on a gazebo outside the University of New Hampshire boathouse in Durham, NH, Wednesday, Oct. 16, 2019. (Photo: AP)

New England is awash in historic markers, but a handful of plaques popping up in a New Hampshire town are different.

Rather than commemorating important people or places in history, many of these dinner plate-size signs detail events like rising sea levels and an explosion of ticks that have yet to happen — part of an effort to draw attention to the potential effects of climate change.

The signs are based on possibilities laid out in the scientific research that the towns have used to develop their climate plans and written from the perspective of someone in the 22nd century looking back.

“The concept is to just really take that information that is on the websites and package in a way to insert it into the landscape where people will bump into it,” said Northeastern University’s Thomas Starr, who came up with the project known as “Remembrance of Climate Futures.” He has placed 11 plaques in Durham, New Hampshire, six in Essex, Massachusetts, and is planning to install some in Cambridge, Massachusetts, as well.

“There seems to be difficulty in getting people to engage in this issue,” he said. “We do hear about it fairly often. Yet, people don’t think of it in an immediate way.”

Scientists have warned that global warming will result in rising seas and more heat waves, droughts, powerful storms, flooding and other problems. Many of the impacts can already be seen: The UN’s World Meteorological Organization released a report last month that showed that in the last several years warming, sea level rise and carbon pollution have all accelerated.

Despite the dire warnings and growing acceptance that climate change is to blame for the increasing frequency of weather disasters, many Americans still see it as a problem affecting far-away places or a problem that their children or grandchildren will have to grapple with.

To counter that apathy, Starr and others have turned to public art to get the message out that climate change is coming to New England communities. The markers imagine events like a boathouse destroyed in a storm surge from a Category 4 hurricane on Sept. 24, 2032, or a heat-inspired tick outbreak that forced a park to close on June 8, 2044.

“We read on the news about the Arctic ice caps melting and impacts on polar bears,” said Durham’s Town Administrator Todd Selig. “But that is very hard for someone in Durham, New Hampshire, going about their busy life to relate to and to grasp.”

Other markers are more hopeful, imagining commemorating how Durham switched to 100% renewable energy on July 20, 2040, or planted elm trees in May 2026 to reduce the urban heat effect.

“It’s a good thing. At least we can say to our grandchildren that we did something,” said Adam Perkins, a tow truck driver from Durham, who was looking at a renewable energy plaque at town hall recently.

Anthony Leiserowitz, director of the Yale Program On Climate Change Communication, said the project is just one of several that is using innovative ways to bring the issue to the public.

One in Florida encourages people to place large numbers on their homes to show how many feet melting glacial water must rise before the structures are underwater. Another placed cardboard cutouts of ostriches chatting about climate change in Boston’s subway system.

“It’s a very clever idea because it’s a way of sparking conversation where people live,” Leiserowitz said of the New England project.

It is unclear what impact, if any, the signs are having. Durham is home to the University of New Hampshire, and interest in climate change is generally stronger in college towns. Eventually, Starr hopes to bring his project to more conservative communities where skepticism might be higher like towns in the Midwest that experienced destructive floods this spring.