Asians strive for a zero-waste lifestyle 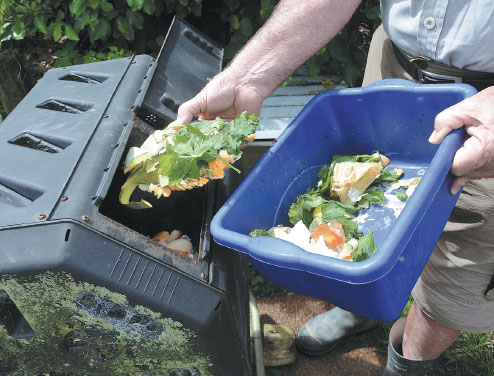 Policy support from governments can encourage more people to take on the challenge, advocates say

Tam, an assistant professor at Hong Kong Baptist University, said 200 users have signed up with the app so far. She believes the number will continue to grow as Hong Kong residents become more aware of the increasing waste problem.

"The global waste problem is a big issue. This is a local response to large questions," she told China Daily.

Tam said Hong Kong dumps more than 3,000 metric tons of food waste each day. Most of that food, however, could still be consumed.

By using the Breadline app, Tam said people in Hong Kong are doing their part to reduce waste and move toward a zero-waste lifestyle.

Environmentalists said it is not only Hong Kong residents who are drawn to such a lifestyle. Across Asia, people are becoming more aware of what they consume and are spurning single-use plastic bags, straws and disposables.

Zero-waste stores have sprung up in a number of Asian cities, including Manila, Chennai and Jakarta. They cater to consumers willing to bring their own containers to buy food and toiletries in bulk, eliminating the need for packaging.

"Being zero-waste is not the same as being litter-free," Dharmesh Shah, policy consultant for the Global Alliance for Incinerator Alternatives (GAIA), said.

Shah said that like most of his fellow advocates, he grew up mindlessly using plastic bags and other disposables.

"The problem of waste worsened after plastic was invented. Using plastic products was convenient," he said.

But his research into India's waste problem spurred him to adopt a zero-waste lifestyle - because, he said, "it was the right thing to do".

Shah said he has stopped using plastic bags, straws and disposable cutlery. He believes he can still do more, however. "For instance, when it comes to plastic packaging, I am still dependent on supermarkets. So I have no choice but to buy packaged products," he said.

For Tiza Mafira, a lawyer in Jakarta, it is not enough that she is using reusable bags and avoiding disposables to reduce the plastic garbage that is choking the waterways in Indonesia's key cities.

This is why she co-founded the Indonesia Plastic Bag Diet Movement in 2013. The group is campaigning against single-use plastic bags and has proposed a levy on plastic bags.

The "zero-waste" movement was founded in the early 2000s when a group of environmental advocates convened in the United Kingdom and Malaysia to address the world's growing waste problem. The participants agreed that having more incinerators and landfills is not enough to solve the problem. It has to be addressed at source and requires a system that will reduce and eliminate waste production.

Environmentalists said the move toward zero waste is now more relevant for Asia as the region has to cope with a mounting trash problem that harms human health and the environment.

According to the United Nations Environment Programme, Southeast Asia produces 1.14 kilograms of municipal waste per capita every day.

In India, a Central Pollution Control Board study across 60 major cities showed that they generate over 4,000 tons of such waste per day. The country generates nearly 26,000 tons of plastic waste daily.

In China, the National Bureau of Statistics said the country produced 215 million tons of domestic waste in 2017, up by nearly 60 percent from 2001.

Compounding the problem in Asia are waste exports from industrialized countries in the West, which have treated the region as their dumping ground.

This has drawn widespread condemnation in recent months, with the Philippines, Indonesia, Cambodia and Malaysia demanding that the waste exporters take back their trash.

"I would argue that waste generation and prosperity are correlated. The richer we get, the more we pollute," GAIA's Shah said.

Shah said the rise of Asian economies has boosted consumerism and produced more trash. The biggest policy challenge, he said, is "to decouple economic growth from waste generation".

The power to effect lasting change lies with corporations and governments, Shah said.

Asian policymakers are now incorporating zero-waste concepts in their strategies.

In South Korea, the government charges a flat fee for each bag of food waste thrown in a recycling bin. The food waste is then collected and turned into compost or animal feed. The policy has also encouraged home composting and urban gardening.

Asian countries such as China, Bangladesh, Sri Lanka and Brunei have banned single-use plastic bags. Shoppers either bring reusable bags or pay for a plastic bag.

While Indonesia is yet to impose a nationwide ban on plastic bags, local governments on the island of Bali, the cities of Banjarmasin in South Kalimantan, Balikpapan in Borneo, and Bogor in Java have banned single-use plastic bags.

Other countries are mulling similar policies. India and Thailand are planning to ban disposable plastic bags, cups and straws.

Indonesia is considering imposing a levy on plastic bags, while Japan requires retailers to charge for them.

In Singapore, the government is drafting a Zero Waste Master Plan that aims to reduce food, packaging and electronic waste.

In China, the Ministry of Ecology and Environment said 11 cities were chosen to pilot the country's "no-waste city" plan, which aims to reduce the production of solid waste and maximize recycling.

Businesses are also playing their part to reduce waste by dissuading consumers from using disposables.

In the Philippines, consumer goods manufacturers Unilever and Human Heart Nature have set up a refilling station for shampoo and liquid detergent.

In Singapore, supermarket chain NTUC FairPrice has started charging a fee for plastic bags, while fastfood operator McDonald's said it has stopped serving straws and disposable cups to diners.

In Brunei in May, over 50 entrepreneurs launched the Zero Waste Brunei campaign. They pledged to gradually reduce the use of disposables such as straws, plastic bags, plastic packaging and plastic cutlery, with the goal of completely eliminating them from their stores.

Members of the Indonesian Retailers Association (Aprindo) started charging for plastic bags in March. Aprindo is composed of around 40,000 convenience stores.

Meenakshi Bharath, co-founder of the civic group Solid Waste Management Round Table (SWMRT) in Bengaluru, believes that government and businesses should take the lead in reducing and eliminating waste. But this does not mean that the public cannot do anything to make an impact.

Bengaluru, formerly Bangalore, is the capital of the South Indian state of Karnataka. Bharath said residents organized themselves to set up SWMRT in 2009, doing their part to reduce garbage in the city. "We visited a landfill, and this made us all determined to be more eco-friendly," she said.

Bharath said SWMRT held workshops where participants learned how to segregate waste, and make compost to use as fertilizer for their gardens at home.

She said the group's members also decided to bring their own cutlery and water bottles after learning that disposables account for most of the dry waste they collected.

"Garbage is a big issue. The government, businesses and citizens all need to do their part. We all need to participate," Bharath said.