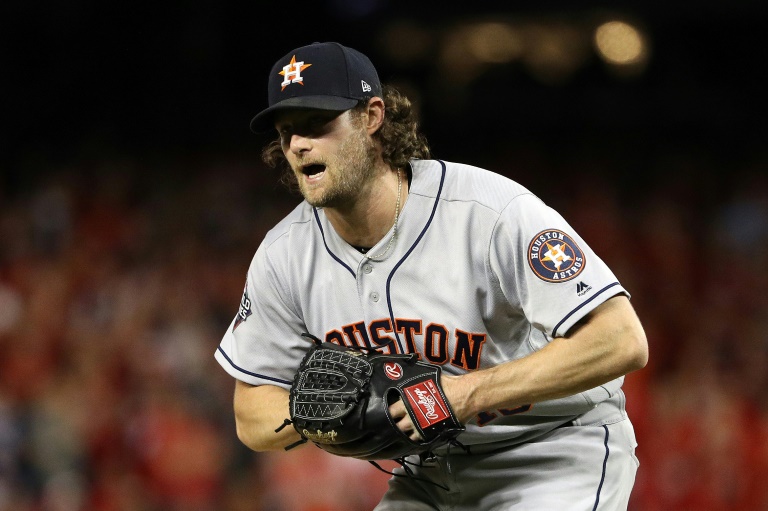 Yordan Alvarez, Carlos Correa and George Springer each smacked two-run homers Sunday and the Houston Astros advanced to the brink of their second World Series title in three seasons by defeating the Washington Nationals 7-1.

Houston pitcher Gerrit Cole struck out nine and surrendered only one run on three hits over seven innings as the Astros seized a 3-2 lead in Major League Baseball's best-of-seven final.

Game six is set for Tuesday in Houston, where a seventh game would be played Wednesday if necessary.

The Astros can secure a second title in three seasons Tuesday when Justin Verlander takes the mound against Washington's Stephen Strasburg.

The Nationals must win twice in Texas, as they did in the first two games of the series, to capture the first title in the franchise's 50-year history.

It would also be the first crown for Washington since 1924, the US capital has gone 33 years without baseball after two clubs relocated.

The Astros could become only the third team in World Series history to lose the first two games at home and win the title, the first since the 1996 New York Yankees.

In sweeping three games at Washington, where no home team has won a World Series game since 1933, the Astros outscored the Nationals by a combined 19-3 after falling twice by a combined 17-7 in Houston.

Cole allowed five runs on eight hits over seven innings in a game-one loss but mystified Nationals batters Sunday, throwing 71 of his 110 pitches for strikes with only Juan Soto's solo homer in the seventh to spoil a masterclass performance.

The Nationals suffered a major setback hours before the start when scheduled starter Max Scherzer was pulled due to neck and trapezius muscle spasms, leaving 26-year-old right-hander Joe Ross to pitch on short notice.

Doctors say Scherzer might be available for Washington if the Nats can force a seventh game.

Alvarez, who went 3-for-3 at the plate, smashed a two-run homer into the centerfield stands off Ross in the second inning after Yuli Gurriel had hit an infield single.

Soto singled and took third on Howie Kendrick's single in the second but Cole struck out Ryan Zimmerman and induced a double play to end the threat.

Correa followed an Alvarez single in the fourth with a two-run homer off Ross to left field, lifting the Astros ahead 4-0.

Soto snapped a hitless streak of 5 1/3 innings for the Nationals by smashing a solo homer just over the centerfield wall in the seventh, trimming Houston's lead to 4-1.

But the Astros answered in the eighth as Springer doubled, took third on Jose Altuve's ground out and scored on a Gurriel single.

Springer blasted a two-run homer to left field in the ninth after a Martin Maldonado single to complete the scoring.

US President Donald Trump received a chorus of boos from the crowd of 43,910 when his image appeared on the stadium video screen just after the third inning.