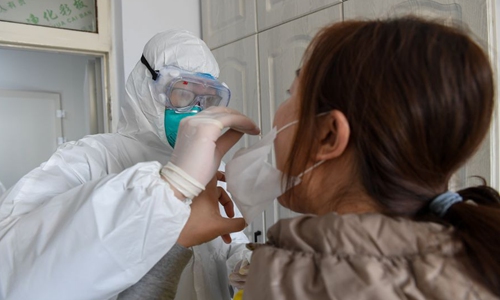 Chinese researchers have revealed a high rate of silent coronavirus (COVID-19) carriers after studying a cluster infection case related to a supermarket in East China, where 24 people were infected.

Supermarket employees in Liaocheng, East China's Shandong Province, and 13 families and friends are confirmed with coronavirus infection, according to a pre-print paper written by Chinese experts released recently on medRxiv website, a pre-print server for Health Sciences operated by Cold Spring Harbor Laboratory.

Seven of the 24 patients were asymptomatic, and six of them were supermarket employees, according to the paper.

Asymptomatic infections are attracting more attention, and not only because the patients were not rare, but also because they are infective.

China has reported 6,764 asymptomatic infections, with 1,297 confirmed patients, according to the National Health Commission on Wednesday.

The first patient from the supermarket was an employee who revealed (COVID-19) symptoms on January 22. The study found the duration from the onset to quarantine release was 21.04±6.77 days, and the onset time was concentrated in 5-11 days after the first patient was diagnosed.

The paper noted that whether the patient had clinical symptoms or not, all the patients in this group had chest CT manifestations of pneumonia, and most of them were bilateral infiltration, which was different from other respiratory virus infections.

Liaocheng reported a total of 38 confirmed COVID-19 cases as of Thursday who have all recovered and been discharged from hospitals, according to local media.