At Argentina football club, Maradona is God, Messi is Adam 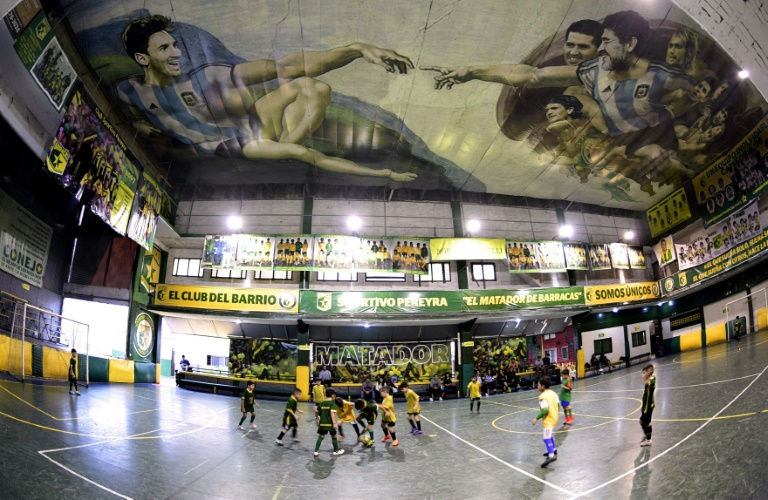 There is no question that football is a sort of religion in Argentina.

And one of the football-mad country's brightest stars, Diego Maradona, is known for his infamous "Hand of God" goal against England in the 1986 World Cup.

Now, on the ceiling of one club in Buenos Aires, in a painting modeled after Michelangelo's work in the Sistine Chapel, Maradona is God, extending his hand to Adam -- Lionel Messi.

Argentina-born Pope Francis, an avowed football fan, would certainly smile at the grand gesture made by the club Sportivo Pereyra, located in the Barracas district of the capital, where football and other team sports are played.

"For us, this pitch is our temple -- a sacred temple of football, and what better than to have a fresco on the ceiling that is worthy of a temple," coach Ricardo Elsegood told AFP.

"The Sistine Chapel has God and Adam, and the chapel of football has Messi and Maradona."

The players are clad in the classic blue and white striped jersey of Argentina's national team.

The club, where many children play, is located in the southern part of Buenos Aires, not far from the stadium of the Boca Juniors, Argentina's most successful club.

"It's as if Maradona had bestowed upon Messi the gift of continued good football," explains the artist who painted the work, Santiago Barbeito.

For Elsegood, it was a simple decision.

"We realized the ceiling was rather dark. We thought at first of painting it blue with white clouds. But one day, the artist came and said it would be better to do it with Messi and Maradona," he said.