CULTURE At track championships, it’s as if Russia doesn’t exist

At track championships, it’s as if Russia doesn’t exist 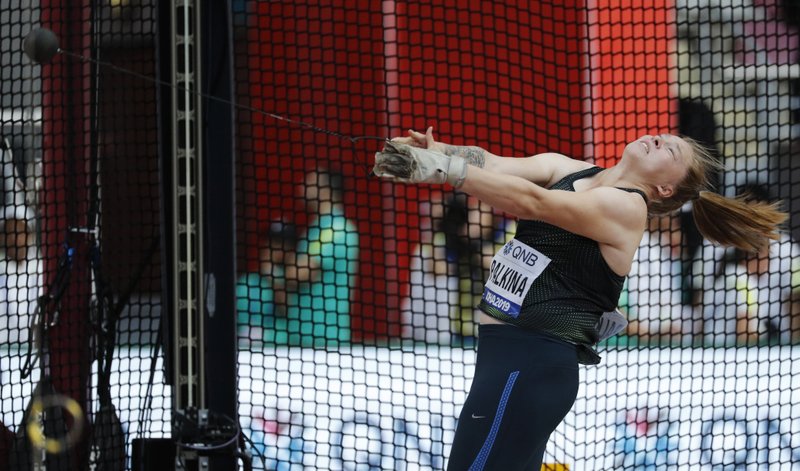 At the world track championships, it’s as if the world’s biggest country simply doesn’t exist.

Suspended for its second world championships due to doping, Russia has sent 30 “Authorized Neutral Athletes” who can’t wear national colors. The icon next to their name on television and on the scoreboards in the stadium is the “IAAF” logo of track’s federation instead of the Russian flag.

There’s no getting used to being a neutral, says Mariya Lasitskene, who’s been here before when she won the high jump world title in 2017. Her anthem wasn’t played.

“No one’s used to it. Everyone’s worried and nervous. It’s not nice. You want to be in a different uniform, and not to see IAAF next to your surname,” she said after qualifying for the final Friday.

Wearing subdued blacks and grays, Russia’s athletes dress like they’re modeling generic sportswear. A vetting process has kept out past stars with a history of drug use, so the team in Doha is just 30 athletes. Lasitskene is the only reigning champion, but Russians are also targeting medals in men’s high jump and the 110-meter hurdles.

Nearly four years into its ban from track and field, much longer than in any other sport, Russia dared hope it might once again send a full team to this year’s championships. Instead, Russian track is battling a new wave of scandals.

This year has seen banned coaches still working, forged medical documents and — most damagingly of all — evidence revealed Monday that data on past offenses was tampered with before Russian law enforcement handed it over in January. The World Anti-Doping Agency is investigating and could place further restrictions on Russia across multiple sports ahead of next year’s Olympics in Tokyo.

If WADA suspends Russia’s anti-doping agency, she’ll move abroad — though “definitely not to the US” — to show she’s under a rigorous testing program.

“We’d be going to train, and I’ll underline that. To train, not to change nationality,” she said. “Training abroad might very well be needed, because I don’t want to miss the Olympics a second time.”

In 2016, Lasitskene was a contender for Olympic gold, but she was barred along with almost all of the Russian squad. The winning height of 1.97 meters was easily within her range.

The IAAF hoped a ban would prevent a repeat of the widespread cheating at the 2013 championships in Moscow by forcing Russia to develop a new, clean generation of athletes. But young athletes have been implicated too.

Of the six Russians who won medals at the last world championships in 2017, two have since been stripped of the neutral athlete status which allows them to compete internationally. Race walk silver medalist Sergei Shirobokov was found at a secret training camp in Kyrgyzstan with a coach banned for life for blood doping.

The case of another 2017 medalist, high jumper Danil Lysenko, won’t go away. After he missed three drug tests, he faced a ban. In his defense, the Russian track federation produced medical documents apparently showing he had been too ill to test.

After suspicions were raised about the apparently non-existent clinic named on the documents, the IAAF’s Russia task force reports Lysenko later confessed the documents were fake. He said top officials from the Russian track federation “conspired with him to obtain and provide those documents.” The task force added he “subsequently recanted that allegation.”

Being neutral doesn’t make the Russian athletes independent of their doping-tainted federation, which still decides team selections and coaching appointments.

That means few Russian athletes are willing to speak out about the federation’s slow pace of reform. As Russia’s sole world champion, Lasitskene’s fame brings her more freedom, which she used in June to call for mass resignations of Russian officials and doping-tainted coaches.

The neutrals have been given a code of conduct for the world championships — no flags, no singing the anthem, no facepaint or nail varnish in Russian red, white and blue.

After three seasons traveling the world as a neutral, Lasitskene knows the rules inside out. “Everyone’s knows what’s what.”