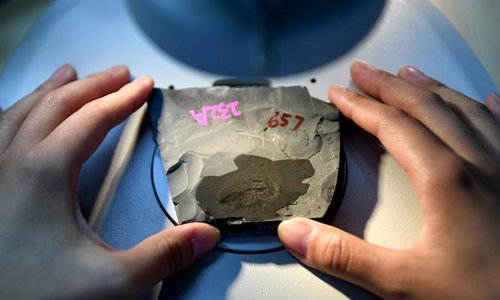 A student from the Department of Geology carries out research on a fossil from the Qingjiang biota in Northwest University in Xi'an, capital of northwest China's Shaanxi Province, April 8, 2019. (File photo: Xinhua)

Scientists have found traces of early life in Western Australia's (WA) famous 3.5-billion-year-old rock formations, representing a giant breakthrough in the understanding of how life formed on Earth.

Researchers from the University of News South Wales (UNSW) have for the first time found organic matter located in a group of fossilised stromatolites known as the Dresser Formation in WA's Pilbara region.

"This is an exciting discovery -- for the first time, we're able to show the world that these stromatolites are definitive evidence for the earliest life on Earth," lead researcher Dr Raphael Baumgartner from UNSW said.

Ever since their discovery in 1980 it has been hotly contested whether the Dresser Formation actually were of biogenic origin, and therefore the earliest signs of life on earth.

To prove the theory, Baumgartner and his team took drill core samples of the stromatolites, beyond the weathered exterior to where the rock's microbial past was far better preserved.

"In this study, I spent a lot of time in the lab, using micro-analytical techniques to look very closely at the rock samples, to prove our theory once and for all," Baumgartner said.

What they uncovered was that the stromatolites were essentially composed of pyrite -- also known as 'fool's gold' -- within which there were "exceptionally preserved coherent filaments and strands that are typically remains of microbial biofilms."

"I remember the night at the electron microscope where I finally figured out that I was looking at biofilm remains -- I think it was around 11pm when I had this 'eureka' moment, and I stayed until three or four o'clock in the morning -- I was so excited, I totally lost track of time," Baumgartner said.

The breakthrough contributes to growing evidence from the Dresser Formation about how life on earth may have originated and is now informing current searches for life on Mars, with NASA experts travelling to WA last month to learn about this unique site.

"This represents a major advance in our knowledge of these rocks, in the science of early life investigations generally, and -- more specifically -- in the search for life on Mars. We now have a new target and new methodology to search for ancient life traces," Director of Australian Centre for Astrobiology at UNSW, Professor Van Kranendonk said.