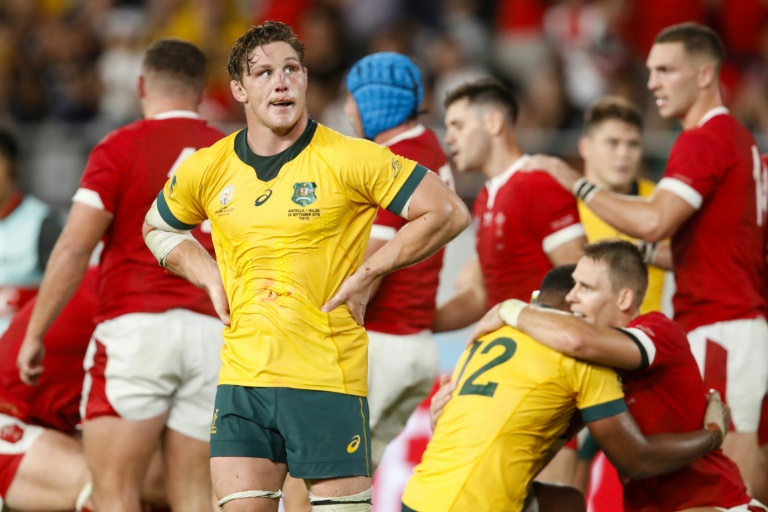 Instead of shining like the sun, Australia's famed 'Super Pooper' combo of Michael Hooper and David Pocock were left feeling blue Sunday after running into a fire-breathing Welsh dragon.

A herculean second-half effort from the Wallabies fell just short as Wales grabbed a clutch 29-25 victory that puts the Six Nations champions in pole position to top Pool D.

Australia reached the 2015 World Cup final with Pocock starring at No 8 and Hooper at openside, and Cheika reunited the master poachers alongside Isi Naisarani looking to inject a little devil into Australia's back row.

But after helping Australia beat Fiji 39-21 in their opening match, Hooper and Pocock ran into a Welsh back row who refused to budge an inch and put them under constant pressure.

"We know how dangerous they are as poachers," said Wales captain Alun Wyn Jones.

"That was the point in the first half with the urgency to stop separation of breakdown and keep them out of the game," he added.

"They probably had a few more in the second half and slowed us down but credit to our back row for doing a job on them."

Hooper had a mixed game, coughing up possession on the game's first play for Welsh fly-half Dan Biggar to kick a drop goal after just 37 seconds.

He was fortunate not to see yellow after a late hit on Biggar in the first half, escaping with a ticking off from French referee Romain Poite as boos rained down from the Welsh fans.

"I knew I hit him low, I didn't hit him in the head," said Hooper, asked if he had feared a spell in the sin bin.

"With slow motion you can make it look like anything. I would've been surprised if it had gone further."

Expected to cause havoc at the breakdowns, the Aussie flankers were more than matched in the loose by monstrous efforts from Justin Tipuric and Josh Navidi, while Aaron Wainwright put in a fierce first-half display at blindside.

Wales did a superb job of controlling the ball, forcing 12 turnovers to three for Australia -- a statistic that will concern Wallabies coach Michael Cheika.

The Pooper machine kicked into gear after the interval, a fine offload from Pocock leading to a try for Dane Haylett-Petty 10 minutes in the second half.

And showing typical bloody-mindedness, Hooper bundled over for a try after 62 minutes to reduce the deficit to 26-22 after Matt Toomua's conversion.

But Wales hung on and as the Wallabies trudged off, Welsh singer Bonnie Tylers 1970s hit "It's A Heartache" cruelly belted out of the stadium's loudspeakers to rub salt into Australia's wounds.