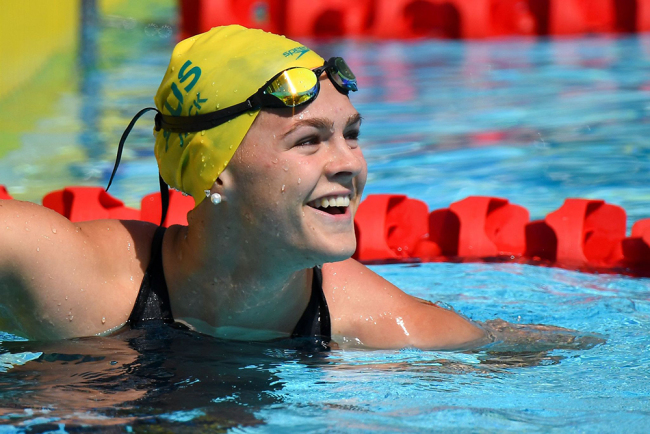 Australia's Shayna Jack smiles after the swimming women's 50m freestyle qualifications during the 2018 Gold Coast Commonwealth Games at the Optus Aquatic Centre in the Gold Coast on April 6, 2018. (Photo: AFP)

Shayna Jack of Australia has tested positive for a banned substance, which prompted her withdrawal from the world swimming championships before the event began for what were cited as personal reasons.

Swimming Australia confirmed Saturday that Jack has been notified of the positive test following an out-of-competition drug test on June 26. She was suspended from the Australian team and sent home from its pre-worlds training camp in Japan.

The governing body had initially declined to elaborate on the reasons for Jack's withdrawal.

Swimming Australia CEO Leigh Russell says the governing body is "bitterly disappointed" about Jack's positive test while adding that the matter has yet to be determined. Russell says the group will continue to provide appropriate support for Jack.

The 20-year-old swimmer had announced on social media she would not compete in Gwangju.

"It is with great sadness that I have to withdraw from world championships due to personal reasons," Jack wrote on Instagram. "I appreciate everyone's support and patience. Thank you all."

The matter figures to embarrass the Australian team, some of whom have been critical of FINA's handling of doping matters.

Mack Horton snubbed Sun Yang on the medals podium after finishing second to the Chinese star in the 400-meter freestyle. Horton is angry that FINA allowed Sun to compete at worlds ahead of his hearing before the Court of Arbitration for Sport involving a clash with drug testers.