CULTURE Australia fight back in Ashes opener after Broad double

Australia fight back in Ashes opener after Broad double 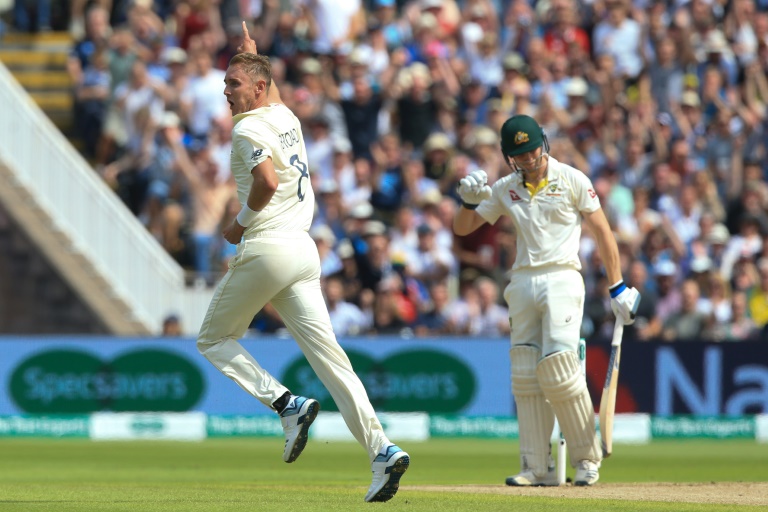 Australia rallied to reach 83-3 at lunch on the first day of the opening Ashes Test at Edgbaston on Thursday after England paceman Stuart Broad struck early to remove openers David Warner and Cameron Bancroft.

Joe Root's buoyant England side are looking to round off an already memorable season by completing a World Cup and Ashes double.

Cheers and jeers rang around the often-raucous Birmingham ground as Broad's double strike left Australia reeling at 17-2 inside eight overs.

Chris Woakes then put the Australians in even deeper trouble when he had Usman Khawaja caught behind for 13.

But former captain Steve Smith, like Warner and Bancroft making his return to Test cricket after all three batsmen were given lengthy bans for their roles in a ball-tampering scandal, held firm.

At lunch he was 23 not out and Travis Head 26 not out, with their unbroken stand worth 48 runs.

Australia captain Tim Paine won the toss for the Ashes holders, looking to win their first Test series away to England in 18 years, and took the bold decision to bat first.

Australia were booed when they walked out for the pre-match anthem ceremony.

Warner and Smith at least knew what to expect, having been given similar rough treatment during the recent World Cup, which saw England beat defending champions Australia in an Edgbaston semi-final last month.

England's all-time leading Test wicket-taker James Anderson beat Bancroft all ends up with the third ball of the match.

Broad might have had Warner out with his first ball, caught behind down the legside.

England opted against reviewing an original not out decision by umpire Aleem Dar but replays showed a thin nick.

But Broad did not have long to wait for Warner's wicket with the left-hander, moving so far across his crease he was batting on off stump, lbw for two.

Warner did not bother with a review, even though technology suggested the ball would have missed leg stump.

As the initial exultant cheers from the crowd at an early wicket died down, Warner was subjected to a prolonged chorus of boos on his walk back into the pavilion, with spectators in the Hollies Stand waving strips of sandpaper and shouting "cheerio".

Bancroft, who has been captaining English county side Durham, twice struck Broad down the ground for four.

They were his only scoring shots, however, with Bancroft edging a fine Broad delivery that bounced and cut away to England captain Root at first slip. The combination of Bancroft departing and Smith walking on prompted the loudest boos of the morning.

In a worrying sign for the hosts, Anderson only bowled four overs before going for a scan on the right calf injury that ruled him out of last week's win over Ireland.

Khawaja then departed for 13, caught behind by wicketkeeper Jonny Bairstow off Woakes, playing on his Warwickshire home ground, although England needed a review to reduce Australia to 35-3 in the 15th over.

Australia have not won a match of any kind at Edgbaston since 2001, while England have won their past 11 internationals at the Birmingham ground.

The match is the first of the ICC's new World Test Championship, with players' names and squad numbers displayed on the backs of their shirts for the first time in 142 years of Test cricket.

England World Cup hero Jofra Archer was left waiting for a Test debut after struggling with a side injury while fellow World Cup winners Ben Stokes and Jos Buttler returned after being rested against Ireland.

Winning an Ashes series in England would give Paine, thrust into the captaincy after Smith was stripped of the job following the ball-tampering scandal in South Africa last year, an achievement as skipper that eluded Ricky Ponting and Michael Clarke.