CULTURE Australia win the inaugural 'Ashes' of jousting against England

Australia win the inaugural 'Ashes' of jousting against England 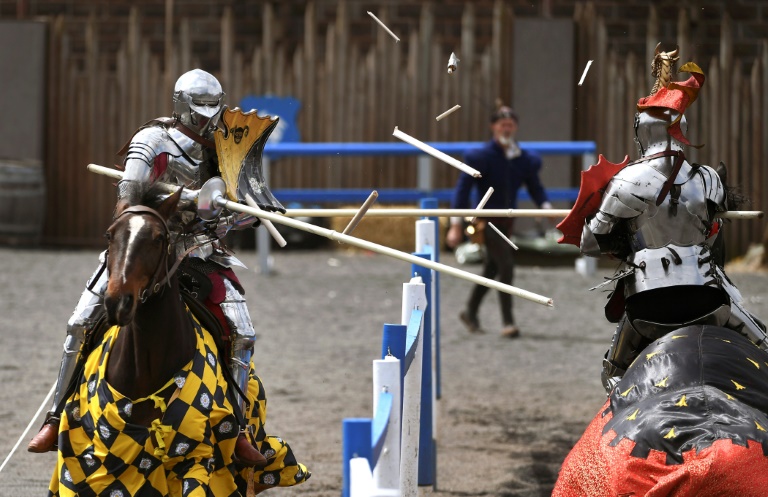 Australia and England took their storied sports rivalry to another level, and another century, this weekend as the two nations faced off in a jousting tournament, won by the Australian side Sunday.

Dubbed the "Ashes" of jousting -- a reference to the historic cricket Test matches between the two countries -- three Australian "knights" bested a trio of English counterparts over two days of competition in a small town in rural Victoria state.

Dressed head-to-toe in medieval-style armour an mounted on steeds sporting skirts in team colours, the competitors charged one another on opposite sides of a barrier, scoring points if they could break their wooden lances against the opponent's torso -- one point for a broken lance, three points if it shatters.

Australia took top honours in the inaugural version of the tournament with 89 points to 75 for England.

Hoping this weekend's joust will become a tradition, organisers modeled their trophy on cricket's Ashes urn, which carries the remains of cricket bails burned after Australia defeated England in a Test in 1882.

It has become the symbolic trophy of the two countries' biannual cricket Test matches.

Not to be outdone, Sunday's jousters burned some of the lance tips broken off during their competition and put them in a small vase as the Australians' trophy.

"The next Ashes will be taking place in England in two years' time and they'll have the chance to win the trophy and take it over there," said Phil Leitch, the Australian captain.

Despite the homage to cricketing history, Leitch doesn't think the sporting events are really on an equal footing.

"I think it's 100 times more exciting than watching cricket -- seeing men on horses each traveling at about 40 kilometres an hour, hearing the crack of the lance, seeing pieces of wood go flying in the air ... that's much more exciting for me than cricket," he told AFP.

Historical jousting has been popular in England for decades, said England captain Andy Deane, but "unbeknownst to us, (on) the other side of the planet, Australians are doing the same."

"All in all great result for Australia," concluded Leitch. "And hopefully in a couple of years, we’ll be over in the UK defending our title."