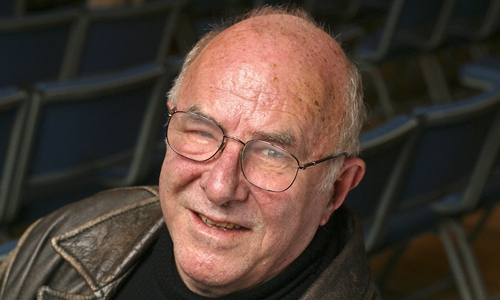 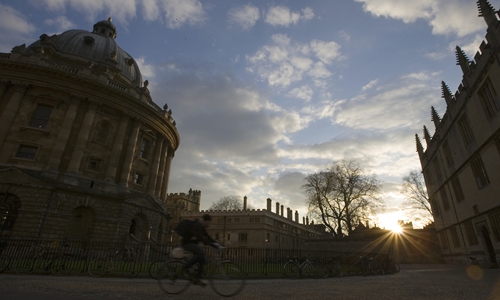 A cyclist passes the Radcliffe Camera and the Bodleian Library in Radcliffe Square, Oxford at sunset. (Photo: VCG)

Clive James, the Australian broadcaster, writer, critic and poet who charmed generations of Britons with his humor and wit, has died at the age of 80, his agents said Wednesday.

James died "peacefully and at home, surrounded by his family and his books" in Cambridge, eastern England, on Sunday, United Agents said in a statement.

A private funeral attended by family and close friends took place on Wednesday in the chapel at Pembroke College in Cambridge University, where he read English literature as a student in the 1960s.

The charismatic and erudite broadcaster, who left Sydney for England in late 1961 and made his career in Britain, had fought a long battle with leukemia.

"Clive died almost 10 years after his first terminal diagnosis and one month after he laid down his pen for the last time," UA said.

"He endured his ever-multiplying illnesses with patience and good humor, knowing until the last moment that he had experienced more than his fair share of this 'great, good world.'"

He made his name as The Observer newspaper's TV critic for a decade from 1972, where he turned the TV review into somewhat of an art form.

His own hit TV show, Clive James on Television, fronted with his wise-cracking presenting style, put some the world's most bizarre programs under the spotlight - notably clips of the Japanese game show Endurance.

Another regular guest was the Cuban singer Margarita Pracatan, who paid tribute on Wednesday to James' intelligence, talent "and beautiful way of living."

He retired from mainstream television in 2000.

Penned his own obituary

The British Academy of Film and Television Arts (BAFTA), presented him with a special lifetime achievement award in 2015.

"He had a huge range of talents and everything he did was essential listening or viewing. He is irreplaceable."

He published several volumes of his memoirs, including The Blaze of Obscurity about his years in television.

After an unsuccessful operation to remove a cancer on his cheek in February this year, James set about compiling an autobiographical anthology of poems called The Fire Of Joy, which was finished a month ago.

During his long illness, James penned his own obituary, regularly updating it on his website.

He said it would "serve as a cheaper obituary than anything most newspapers are likely to have in the freezer."

"I will keep updating it until they carry me to the slab, during which journey I will try to give details of my final medication," he wrote.

James' death was announced after the family of theater director Jonathan Miller said he died on Wednesday at the age of 85.

Miller once appeared as a guest on James' chat show The Late Clive James in 1988, in which he discussed his love of stationery.

The polymath first found fame in the early 1960s in the revue Beyond The Fringe with Peter Cook, Dudley Moore and Alan Bennett.

Miller directed theater and television plays, including The Merchant Of Venice at the National Theatre and six of BBC television's Shakespeare plays.

"Our father died this morning peacefully at home with his family around him following a long battle with Alzheimer's," Miller's family said in a statement.

Britain's National Theatre called Miller a "legendary figure across theater and opera," while the English National Opera said "his contribution to comedy, theater and ENO in particular was immeasurable.

"For over four decades Jonathan created some of ENO's most celebrated and popular opera productions."