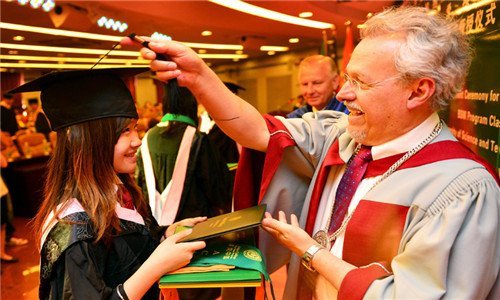 Over 80% of Chinese students who study abroad return to China. (Photo: Xinhua)

Fewer Chinese students are going to study in Australia due to a sluggish economy there and souring relations between the two countries.

"Applicants to Australian universities via our platform have dropped by about 5 percent so far this year," Wang Lunwen, CEO of study abroad agency Sky Migration, told the Global Times on Wednesday.

By contrast, the number of applications to the UK and other European universities jumped, and the US also remained one of the favorite education destinations for Chinese students. According to a report, the UK authority granted over 99,000 student visas in 2018, increasing 13 percent year-on-year.

The reasons behind the decline are tensions between China and Australia as well as slowing economic growth in Australia, according to industry insiders and experts.

"The strained political relations between the two countries are making students, as well as parents, worry about the general environment for Chinese students," said Liu Qing, director of the department for Asia-Pacific security and cooperation at the China Institute of International Studies.

Some Chinese companies have withdrawn or held back investment in Australia due to strained bilateral relations, which weighs on the job prospects of Chinese students, according to Wang. "If it's hard to stay and find a job there, fewer Chinese students would come."

Meanwhile, Chinese students are also worried about whether political tensions would translate to hurdles in visa applications and career prospects, which prompted them to give up their study plans, Wang said.

China is the biggest source of international students, accounting for 30 percent of Australia's all-important international education sector in 2018.