SYDNEY, Dec. 9 (Xinhua) -- Worried you may have cancer? One day you could take a 10-minute test with a 90 percent success rate, thanks to a new cancer-detection approach that can uncover traces of the disease in a patient's bloodstream developed. 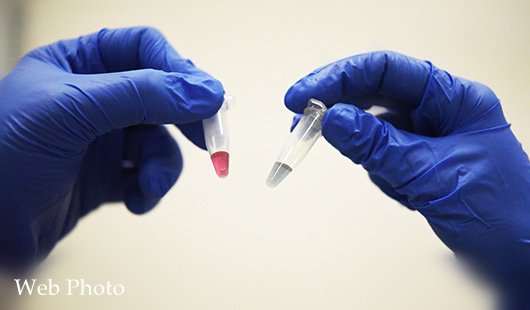 The cheap and simple test uses a color-changing fluid to reveal the presence of malignant cells anywhere in the body and provides results in less than 10 minutes, according to a new study published in the journal Nature Communications.

"This led to the creation of inexpensive and portable detection devices that could eventually be used as a diagnostic tool, possibly with a mobile phone," said Matt Trau, a co-researcher at the University of Queensland in Australia, in a statement.

The test was made possible by the Queensland team's discovery that cancer DNA and normal DNA stick to metal surfaces in markedly different ways. This allowed them to develop a test that distinguishes between healthy cells and cancerous ones, even from the tiny traces of DNA that find their way into the bloodstream.

The DNA sample is added to water containing gold nanoparticles. DNA from cancer cells sticks to the nanoparticles, making the water's color stay pink; DNA from healthy cells binds to the particles differently and turns the water blue.

The researchers have run the test on 200 human cancer samples and healthy DNA with 90 percent accuracy.

The test has only been used to detect breast, prostate, bowel and lymphoma cancers so far, but researchers are confident that the results can be replicated with other types of the disease.

"We certainly don't know yet whether it's the holy grail for all cancer diagnostics, but it looks really interesting as an incredibly simple universal marker of cancer, and as an accessible and inexpensive technology that doesn't require complicated lab-based equipment like DNA sequencing," Trau said.

The test has yet to be used on humans and large clinical trials are needed before it can be used on prospective patients.